Dear Parents: There are More Unvaccinated Kids Than You Think |
AD 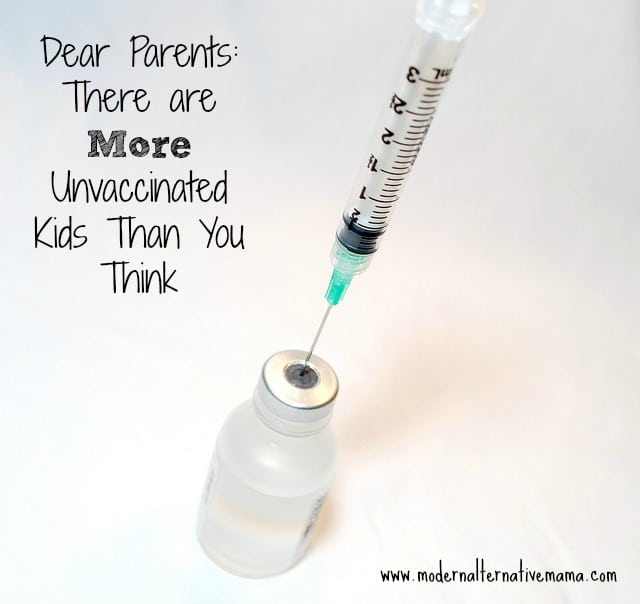 Dear Parents: There are More Unvaccinated Kids Than You Think For the last several months (years?) there have been an increasing number of reports in the media about who is vaccinated and who isn’t…and the repercussions of such a choice.

We aren’t going to dive into those repercussions today.  They’re mostly silly, anyway.  It “seems” to make sense that since fewer people are vaccinating, this must be the cause of all the of the “outbreaks” of disease.  We’ll pretend that we actually know who started the outbreaks and their vaccination status (we don’t), in most cases, or that 50 – 80% of those who get sick weren’t fully vaccinated (hint: they were).  It doesn’t really take a lot of critical thinking skills to realize there is much more going on here than simply who was vaccinated and who wasn’t.  It’s truly a complex issue, even though it isn’t really being treated as one.  It’s easier to use the people who don’t vaccinate as scapegoats.

Most people, though, feel relatively safe.  After all, their communities are highly vaccinated.  Their friends all vaccinate their children.  Their families aren’t really ever around kids who aren’t vaccinated.

But the thing is…that’s probably not true.

Parents, there are a lot more unvaccinated kids than you think.

The first thing everyone needs to understand is that all of the numbers they throw out about who is not vaccinated come from school exemption forms.  And, these are often just estimates — not all school districts are necessarily reported in those numbers.  These numbers are only accurate for the school districts that reported, for school-age children who attend public schools.  They are not necessarily accurate overall.

There are private school students.  Not all private schools report, and many private schools are likely to have lower vaccination rates, especially those that are “alternative” in nature, like Waldorf or Montessori.  If we included these numbers, the overall rates would probably go down.

But then!  There are students who are homeschooled.  Homeschooled students in most states are not required to fill out exemption forms.  They are not counted, either.  (In my state, it is not required.  My family has never signed any paperwork with the state or any doctor’s office stating that we refuse vaccines, although we have.  So “legally” we are not counted in any of those numbers.)  It’s also true that homeschooled students are more likely to opt out of vaccines, or to choose selective/delayed schedules.  A lot of our homeschooling friends don’t vaccinate.  More don’t, than do.  And they aren’t counted in these numbers.

And there’s more!  These numbers only count school-aged children.  That is, 5 and up, in kindergarten.  They don’t count kids who are too young to go to school and who are not in any system (Headstart kids, for example, would be counted in some cases).  The parents that were opting out 5 – 6 years ago were fewer in number than the parents who are opting out with their babies and young toddlers today.  More and more people are questioning vaccines, and are choosing to opt out of some or all of them.  None of these very young children are counted in any of these numbers.

Most states are estimating coverage rates of 90 – 99% for the “main” vaccines by school age.  There’s lower coverage for less common ones, like PCV or Hep A (down to 50% in some cases).

That doesn’t take into account any of the situations above.  If we say the average state is covered at 95% based on the school-age, public schooled kids, we might be looking at a figure of 85 – 90% — maybe even less — when we include private school, homeschool, and children too young to be in any system.

Bottom line?  We don’t really know how many kids are not vaccinated, but it’s likely a lot more than you think.

Not in My Neighborhood

Still think that you are safe?  That the people you know definitely vaccinate?  Think again.

The attitude towards those who question or opt out of vaccines is pretty hostile right now.  I think we all know that.  This means that families who have made that choice don’t exactly advertise it.  It’s not something that’s really going to come up in conversation.  It’s probably not going to come up on Facebook, either, especially if most people are talking about how stupid families that don’t vaccinate are.

Your friends, your neighbors…they might not vaccinate.  But they wouldn’t feel the need to tell you that.  (And why should they?  It’s a private medical decision.)  If you start asking people, “Did you vaccinate your kids?” you might find out just how few admit that they did — or who admit to skipping one or two of the shots, or delaying some.

Honestly, most people just don’t bring it up, because they don’t feel like being berated for it.  That happens…far too often.  But trust me, there are plenty of people who don’t vaccinate or skip some vaccines and who simply don’t talk about it.  More than you think.

Here’s the thing.  We cannot control the decisions other people make.  We cannot control which people around us haven’t had their vaccines, or even who go to the store or the library or school while sick.  (Wish they wouldn’t do that second part, but whatever.)  We can’t.  We can only control ourselves.

It’s also very true that most of the adult population isn’t up to date on their boosters — and that most never had several of the vaccines on today’s schedule in the first place.  Adults of my generation — mid-20s to mid-30s — did not have PCV, Hep A or B, meninigitis (some got it before college, but not all), rotavirus, Hib, or varicella.  We simply didn’t, because they weren’t available.  And unless someone’s in the medical field, they didn’t have them later, either.

As a whole population — not just kids — we don’t and never have had a very high vaccine coverage rate.  But we haven’t seen massive outbreaks, sickening millions and killing thousands.  It just hasn’t happened.  It won’t happen.  All those “what if we stopped vaccinating” type posts?  Yeah, those are basically made up.  They use data from a time when our country knew very little about disease and medicine (compared to now) and/or use illness and death rates from third world countries.  I don’t need to explain that the circumstances here, vs. say, Rwanda, are strikingly different in more ways than just vaccination rates.

Bottom line: it’s your choice if you want to vaccinate or not.  Give up on caring what others around you do, because you can’t and shouldn’t control it.  You’re already surrounded by people who are not vaccinated or only partially vaccinated (both kids and adults).  You don’t even know it.  And it’s okay.  Really.  It is.

We can’t erase all risk to ourselves, or the risk we may pose to others.  We could look down at the wrong moment while driving and get in a car accident and hurt or kill someone else.  It doesn’t stop us from driving.  We could go out in public with what we think is “just a cold” that turns out to be pertussis, which could be passed on to others.  (Why I am not concerned about pertussis infection — in general, not newborns — and why I *am* concerned about vaccines is an entirely separate post.)  We do our best to be considerate of others.  We do our best to protect our own health and safety.  That’s all we can do.

Let’s just stop worrying about what others are doing.  Our sanity will be so much better for it!

If you think parents deserve the right to choose whether or not to vaccinate their kids — it doesn’t matter what you personally decided — please sign this petition to protect our rights.

How many people around you are unvaccinated?  Do you discuss your choice?