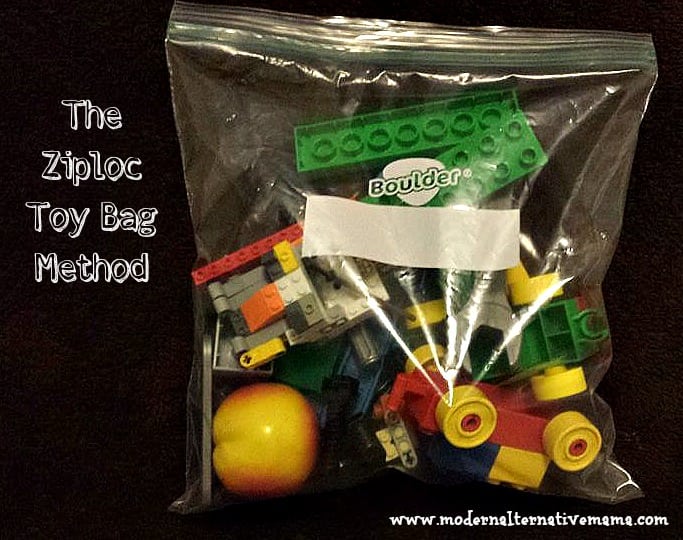 Like most moms, I know what the “toy explosion” is.  Most families have too many toys…so many that they’re usually everywhere and kids aren’t even playing with 80% of them.  It’s more fun to get them all out and throw them around than keep them put away, or to put one away before getting another one out.

Of course, this clutter drives moms — and sometimes even kids! — insane.  Moms hate it because there is so.much.stuff.everywhere.  Kids sometimes hate it because, well — “Mooooom!  Where is my ____?!”  As if anyone could find one particular toy in the sea of toys in all directions.

For those of us with small homes — like me — this is especially bad.  Toys have to be in the main areas of the home, by default, because there isn’t anywhere else they can go.  That means that to respect the space of other family members or even guests, toys have to be kept reasonably well picked up.

I don’t know about you, but when there is Toy Soup everywhere, we spend sometimes hours fighting over the cleaning process.  It’s overwhelming, it isn’t fun, and, well…it’s annoying all the way around.

A couple months ago, I found a unique solution.

When we first moved, we didn’t really have a whole lot of toys yet.  The ones that could be salvaged from our mold experience had to be carefully cleaned before the kids could have them again.  That process took awhile.

When we finally did give them more toys again, the Toy Explosion, and the fights over cleaning up, quickly took over again.  I knew this was not going to work for us.  And so….

Each child was given one gallon-sized Ziploc-style bag.  In it, they could keep some of their favorite toys.  This was all they were allowed to keep, for awhile.  My daughter chose her art supplies — crayons, scissors, glue, etc.  My 5-year-old son chose Legos.  My 3-year-old son chose cars and some Duplos.  My 22-month-old son chose an assortment of trains and cars.

Occasionally they would ask for more toys.  But most of the time, they actively played with the toys they had, often for hours, without making a big mess.  Any mess they made could be cleaned up in minutes.  Since they had their favorite toys, they weren’t bored or unhappy about it.  They usually played better and were more creative and less wild because they had one or two things to focus on.  And I loved it because there wasn’t a massive toy mess everywhere!

(They do have some more options now.  But most often they still only play with a couple favorite things.  I really like the Ziploc bag method and we’ll definitely go back to it, even if they choose different toys every few weeks.  I do regularly go through the toys they have and separate them back into individual boxes based on toy type, and I rid the house of any ‘random’ items that don’t belong to any set that have wandered their way in.  I just hate the random, loose toys that no one ever plays with but that clutter things up.)

Kids really do not need dozens of toys to play with.  A few simple, favorite things are all they need!

How do you tame the toy explosion?