8 Experiences I Had That My Kids Won’t |
AD 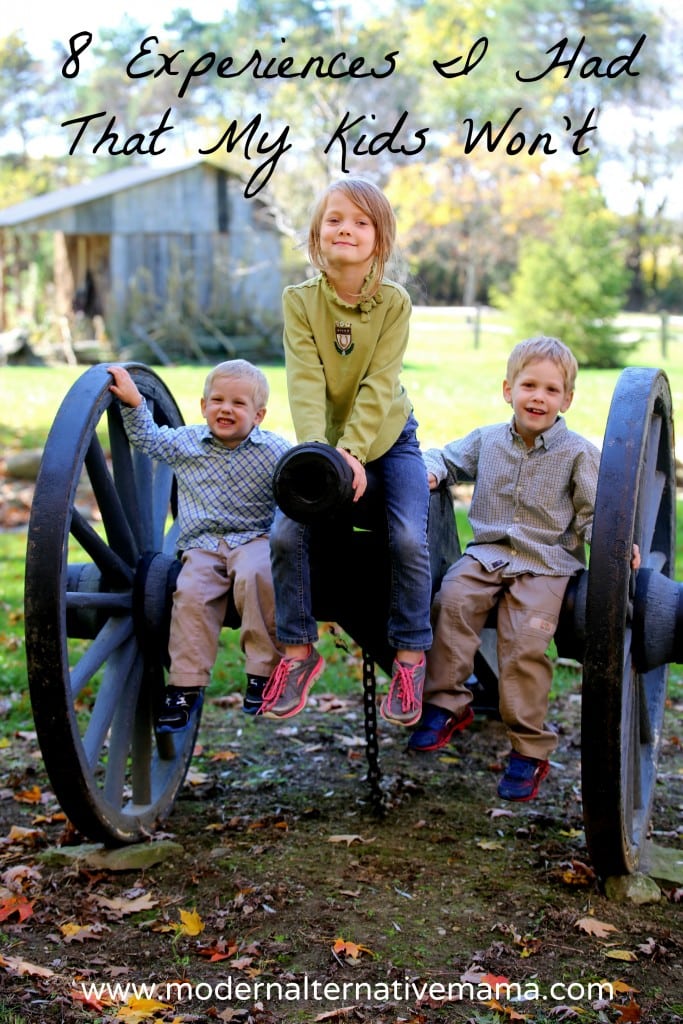 8 Experiences I Had That My Kids Won’t

The other morning, I was lying in bed, thinking.  I was thinking about my own childhood, and how different my kids’ childhood is so far.

Honestly, I think they have the advantage.  But maybe I’m biased. 😉  I’m sharing with you, here, some key ways in which my own experience was different from my kids’.  Please keep in mind that this is just our experiences and I’m not intending this to be universal.  Still, I think some of you will be able to relate.

1. Most of my friends were my same age — or within a year older or younger; my kids have friends of all ages

In public school (at least my public school), there’s a clear “hierarchy” and it’s dependent on how old you are.  The older you are, the higher you rank, and you do not waste your time with all those younger kids.  Plus, it was most practical to be friends with people your own age since those were the people in your class, that you spent the most time with.

In contrast, my kids are regularly in groups or circumstances with kids from birth to age 7 or so.  They draw no boundaries or hierarchies and are friends with all different people, of all different ages.

2. I knew how I “ranked” based on my report card from kindergarten on; my kids have no idea what “grades” are and don’t compare themselves to their peers

From my very first kindergarten report card, my friends and I compared what we got, as did our mothers.   I was well aware that my friends got “perfect” marks in things like ‘keeps a neat and orderly work area’ and ‘follows directions’ and I didn’t. I felt “less than” because I didn’t get perfect marks, even at age 5.  (In no way are your kindergarten grades or neatness marks related to future success in life, yet we were sort of led to believe they were.)

In contrast, my kids are not given grades.  Each of them has their own strengths and weaknesses and each masters new skills in their own time.  Should any of them try to draw a comparison (only to their siblings, not to people outside the family), we remind them of this and don’t let them feel superior or inferior to others based on what they’re doing.

3. I knew that being different was bad; my kids think it’s just being yourself

Kids can be pretty merciless (not unlike some adults…) in letting other kids know when they don’t fit in, and that this isn’t okay.  Teachers, despite being well-meaning, are not really better (I was constantly criticized for having a messy desk or not turning in busy work on time as if these things actually mattered).

In contrast, my kids will actually tell you, “This is just how I am.  I’m different.”  They feel no shame in who they are or how they do things.  They’ve never been subject to peer ridicule.

4. I was taught that you had to be “at grade level” (or ahead) in every subject to be “smart;” my kids have no concept of being smart or dumb based on what they are currently learning

In public school — and I think this is pretty universal — all kids are expected to be “at grade level” in each subject.  That is, there’s some minimum standard that they need to meet in every area (math, reading, writing, etc.).  If they don’t, they know they’re “behind.”  If they’re in the ‘extra help’ class for reading, they know it’s the “dumb” class. (I definitely knew, at least by second grade, which classes I was in, and which my friends were in.)  This is no criticism of teachers; kids figure this stuff out.

In contrast, my kids work at each new skill when they’re ready, which means they’re ahead of “normal” in some areas, and behind in others.  They have no concept of what they “should” be learning at any given time, nor have they ever gotten the idea that they are “dumb” for working at a different pace.  Mastering skills when you’re ready is more important to them than keeping up with other kids.

5. I got the message that lots of things were “scary” and really dangerous via scare tactics — drugs, strangers, alcohol, smoking, etc.; my kids are not taught with fear

I was exposed to “drug” programs from kindergarten on, telling me how scary and dangerous drugs were and how I had better stay away from them.  We were taught few facts and no balanced perspective.  It was be scared away, or get curious what all the fuss was about and try it.  (I happened not to try any.)  I was also taught never to talk to strangers because they could be bad.

In contrast, my kids have received basically no messages about smoking, drugs, and drinking, besides them asking what it is when they see people out in public smoking or buying alcohol.  They’ve learned that these are things some grown-ups do, that we don’t do, that aren’t very healthy for you.  No scare tactics.  As for strangers, when I’m present, they are encouraged to say hello, if they’d like.  We know most strangers are nice people who mean no harm and we behave as such.

6. I was taught that new babies and having to help with younger siblings was a bad thing; my kids are taught that it is good

I watched TV shows and read books where kids were unhappy or fearful about a new baby joining the family; they felt their position would be usurped or their parents wouldn’t love them or take care of them anymore.  I was also told frequently that kids should be allowed to have their own, independent lives and not have to help with siblings very much, if at all.

My kids are excited about new babies and often beg for them!  (They are currently praying we have “girl twins” next…)  They have no fear of being loved any less and frequently show love and affection to their younger siblings.  They also enjoy helping with them and playing with them, and they’re taught that we all help out in the family — whether with each other, or with household chores, etc.

7. I was taught that most kids hated vegetables; my kids don’t have any preconceived notions about food

So many TV shows did and do reinforce the idea that all kids hate vegetables — even that they “should” hate them and how to cope with being served them anyway.  I felt ‘weird’ because I didn’t really hate vegetables.

My kids think this is a silly fantasy (they’ve come across the idea on TV) and when I ask “Who likes vegetables?” I’m met with a chorus of “ME!”

8. I was taught that being fat was bad and something to avoid at any cost; my kids do not know people are judged by their weight or physical appearance

From a young age, I was aware of weight.  A friend of mine was praised for being “skinny” when I was 5 or 6, and I knew this was a good thing, and that what I was, was “less good” (even though it wasn’t said quite that way to me).  Calling out someone else’s body shape caused me to question my own.  I always had the perception that I was bigger or heavier than I was, and when I was briefly overweight in my pre-teen years, peers called me fat, or “triple chin woman” and other such rude names.  I knew that physical appearance was important and was a way to judge others as good or bad.

My children have no such conception.  We have never referred to any person as “fat” — my daughter once asked me, “Why is that lady’s stomach a circle instead of straight like yours?” because she did not have any other words to describe the situation (she was at least 5 at the time).  We do not talk about our own body flaws or issues with body image.  We do not praise their bodies except with words like “strong” and this is not a comparison between people.  They are not taught to judge others on appearance.

I have to say, I wish I’d had their experiences!

It’s so hard, as a kid, to have all of these things ingrained in you — to be told that you’re to be judged not on how you treat others, but on what you look like, if you act the same as everyone else, if you get good grades, if you’re athletic.  Basically, judged on outward appearances and not who you are.

We’re breaking that cycle.  By the time they’re old enough to realize that others judge people in these ways — and they will — they’ll think it’s silly, not valid.  My goal isn’t to shelter them from it forever, just long enough to make a difference in their lives and not allow others to be their standard.

There are plenty more things I can think of, honestly.  Such as, I ate processed food all the time and my kids are taught that healthy food nourishes their bodies.  I was taught that birth was a scary, painful emergency (mostly via TV), and my kids think it is a normal, fun part of life that happens mostly at home.  And lots more.

What experiences did you have that your kids don’t or won’t?