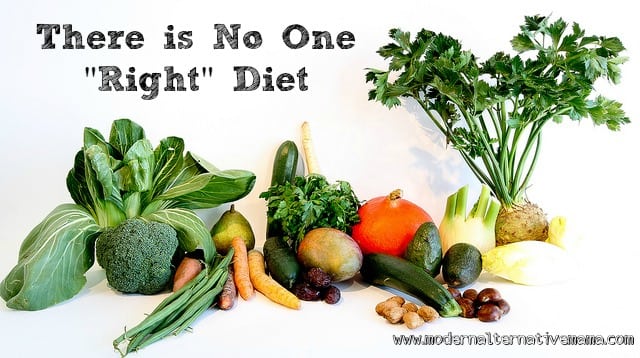 There Is No One “Right” Diet

I keep running into people, many of whom have finally discovered, possibly after years of experiments, what makes them feel really good, diet-wise.  They are, naturally, excited.  They want to shout it from the rooftops.  They often read everything they can get their hands on about their new diet and all of the information that supports it.

Responses from Person B that they do just fine eating this or that are met with scorn and derision.  “You just think you’re okay because you’re addicted to it.  But it’s damaging your body.  It’s bad for everyone!  If you would only read (insert Book C), you would understand.”

Look, there are proponents of every diet who believe that it’s the “right” one.  Who believe that everyone is being damaged when they consume particular foods.  Who write books that cherry-pick data to prove their case.  And there are followers of those books and “experts” who believe what they say and try to convince everyone else that they really need to stop eating certain foods because the book said so.

This is not limited to one group of people.  There are people out there who believe:

Well, gee, what’s left at that point?  Leafy greens?  Be careful about those, some of them are high in oxalates!  Oh…I guess we can’t eat anymore.

There’s someone who thinks every food or food group is bad for you.  If you listen to all of them, you will go insane.  There will be nothing left to eat.  And eating shouldn’t be that frustrating.  Who needs that kind of stress?

I know this all came with good intentions.  When you find what works for you then you want to share.  And maybe someone will learn something!  That’s great, if so.  We should share information, so that people know “If you have these symptoms, you may benefit from eating or not eating these particular foods” and then let them decide if they want to try that out for themselves.  Maybe it will be beneficial for them.  Maybe not.  As long as it’s said with grace and an understanding that they’re a unique individual, it’s a good thing.

But so many people do not share this information just to inform others.  They laugh about it.  They’re condescending.  “Oh, you just don’t know.”  They ignore peoples’ defenses and chalk it up to “the meat talking” and “the grains talking” (or whatever) and believe if they would just listen and stop being sheeple, they would feel so much better.

The smugness and the condescending superiority — that’s what gets to me.

Just don’t do it, people.  Don’t ever assume that your way is “the” way.  Don’t state for a fact that no one should ever eat gluten because it’s poisoning us.  And you know because that one book said so.  Don’t mock people who don’t believe you or who have conflicting evidence — either researched or from personal experience.

If you’re trying to share information, this is the wrong way to do it, anyway.  Advocacy must be gentle and respectful.  Advocacy says “Did you know…” or “Have you considered…”  It allows people a chance to think about the subject in a non-threatening manner, and it gives them a chance to ask questions and discuss the issue.  It leaves room for them to say, “Thanks, but that’s not right for me.”  Without being shamed.  Without being told they just don’t get it.

As soon as you’re rude, no one is going to listen to you.  They are going to roll their eyes at you, argue with you, feel more firmly set in what they already believed.  You aren’t helping anyone when you’re holier-than-thou.  You’re preaching to the choir, and that’s all you’re doing.

This is important, so listen carefully: everyone is different.  There is no ideal diet that is right for everyone.

Yes, gluten is bad for some people, whether they have celiac or an intolerance.  And those people should avoid gluten.  This does not mean that all people need to avoid gluten.

Yes, dairy is bad for some people, whether they are allergic or lactose intolerant.  They should avoid dairy.  This does not mean that all people need to avoid dairy.

I could go on.  I won’t.  The point is, we are biochemically individuals.  We should eat real food, in whole, unprocessed form, and we should avoid chemical processed foods.  That’s pretty universal.  (But I’m not going to shame anyone who eats those things sometimes.  We all eat things that aren’t the healthiest for us, sometimes.  Better to eat the occasional treat or bit of junk stress-free than lose your mind because you “cheated.”)

Beyond that, you’ll find people who do better on or off various different foods.

We know a friend whose child was struggling with severe allergies and some behavior issues.  She tried GAPS, lots of fermented foods, etc.  Her daughter got worse and worse.  She went off GAPS, cut the fermented foods, and experimented until she found what worked for them.  It’s not what “healthy” looks like for our family, but it absolutely works for them.

We have other friends who are vegetarian or vegan and who are healthier that way.

We personally found we do better with soaked or soured whole wheat than gluten-free grains like rice, corn, or quinoa.

This is something that you need to experiment with.  Forget the latest articles that came out saying you have to eat chia seeds or that nut flours are killing you.  Choose the foods that make you feel healthy and strong, and avoid the ones that make you feel unwell.  It really is that simple.

And if anyone comes up to you and says “You know that’s terrible for you and you should never eat it again,” picture yourself smacking them, then say, “But I enjoy it so much,” smile, and walk away.  Who cares what they think?  If they can’t find any better way to broach the topic than that, they’re not worth listening to.

How do you feel about a healthy diet — is there a “right” answer?