The Day We Lost Everything (Part 4) |
AD 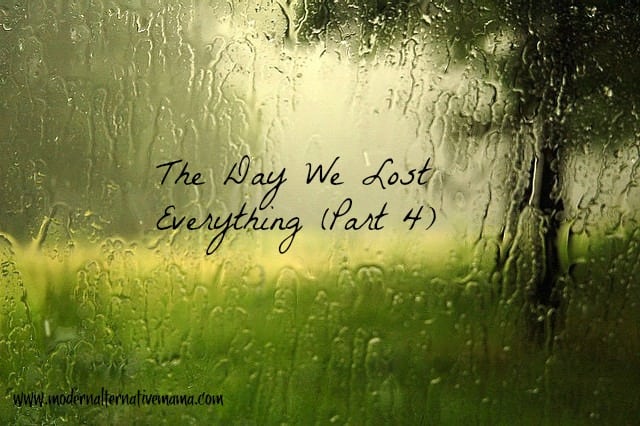 The Day We Lost Everything (Part 4)

If you haven’t read our story yet, see part 1, part 2, and part 3 first.  Part 1 is especially important because it shares the basic story of what’s happening.

In case you don’t read them, the gist is this: due to a major mold problem, we left our home on August 16, 2014.  It was something I’d suspected for months but finally became bad enough that I felt we needed to go.  It took me some time to convince my husband of it (but he is so glad we left, now).  Once we got the tests back — results are in part 3 — we knew that the counts of dangerous mold were very high.

Now, we’re settled into an apartment and on our way back to health.

At this point, we’ve done very little with the house itself.  We’ve had the testing done.  We have gone over to bag stuff up and take it to the dump.  We took no furniture, no clothing.  We did take our TV, some small appliances, and many glass jars.  Anything that is non-porous and completely smooth is easy to clean.

Meanwhile, left mostly untended, the house is getting worse.  When Ben was in there a few days ago, he said the toilet seats are growing visible mold now.  It’s really dangerous in there.  We hope to finish cleaning it out in the next couple of weeks and then get rid of it, one way or another.

When we left the house, our health was not great (adults especially).  We were suffering from extreme brain fog, fatigue, anxiety, depression, low energy, and more.  My acne had flared badly and I couldn’t lose any weight.  (I’d lost about 15 lbs. at the beginning of the year then stalled again.)  Ben had yeast rashes on his feet and legs that were extremely itchy and his stomach was upset most of the time.

The first two weeks were rough.  We slept a lot, and we went through phases where we were angry and depressed and we each had to give the other space and take turns with the kids.  That was not always easy, but we made it work.

In general, we feel much better.  We’re not fully “normal” yet but we will be a few months down the road.

How Did We Do It?

I know this is the big thing that everyone wants to know — what did we do?

For the first few weeks, we were grain-free, to allow our guts to heal a bit.  We weren’t GAPS, per se — we did use arrowroot powder and potatoes.  We chose foods that worked for us, that didn’t cause any reactions.  Grains and sugar, at first, caused immediate and strong anxiety because they were feeding the mold.  After a few weeks, we could do limited grains and that’s where we are now.  Although my husband still does better completely off grains and sugar.

We drank fresh-pressed juice most mornings.  I blended together:

Kale is low in oxalic acid and good to eat raw.  Pineapple is high in bromelain, which is anti-cancer and promotes detox.  Lemons promote detox, especially from the gallbladder.  Ginger is anti-inflammatory.  Oranges are high in vitamin C.

Each adult would drink about 1 – 2 cups of this fresh green juice every morning, along with eating eggs scrambled in bacon grease.  Eating a healthy breakfast was really important.

We took detox baths about every 2 – 3 days.  Ideally, we would have done it every day, but we were so busy with everything else.

After the bath, we laid on a bed for 20 minutes or so (it makes you very tired and sometimes dizzy), and then drank a lot of water.  We often added lemon juice to the water for extra detox. The baths are really important — if Ben doesn’t take one every 3 – 4 days at least, his symptoms start to return because the junk in his system isn’t getting out.

At about the 4-week mark, we saw our alternative doctor, once we had gotten ourselves settled in our new apartment.  He tested everyone to see what they needed and what their issues were.

Three of the kids tested positive for mold in their bodies and needed some supplements to help.  Our youngest has gut damage from it — he basically grew up with mold almost since birth, so all the stuff I was doing to build up his gut (breastfeeding, probiotics, grain-free diet) were competing with the mold.

Our third child, though, had no issues!  He was healthy enough that his body naturally detoxed it all.  He was given just a multi-vitamin (Standard Process) to help rebuild any minor deficiencies, but he didn’t need anything else.

Our oldest two have other issues.  Our oldest son has some gut damage and is on a couple supplements (Detoxosode and Fung-dx) to help get rid of the mold.  I had noticed that his belly seemed a little bloated and he always had a big appetite, despite being the skinniest of the kids.

Our daughter is struggling with some gut damage (which is an ongoing issue) and we’ve seen some sensory issues with her.  This is really a more complicated situation because it all goes back to her struggles as a young toddler.  The mold just set us back a bit.

The supplements prescribed to me, Fung-dx, Multizyme, and Spanish Black Radish (all Standard Process) did not seem to help and made me feel sick.  I know the difference between “die off” and “this isn’t good.”  SBR seemed to do the exact opposite of what it was supposed to!  SBR is supposed to stop constipation, clear out the liver and gallbladder, and help the body detox.  Instead, I felt some pain in my gallbladder plus it caused constipation, dizziness, nausea.  I stopped taking it after about 3 days.  I personally do better on specific herbs that I choose.

The rest of the family did well on their supplements.

Whenever possible, we have tried to rest/sleep more.  I have often slept on the couch because my youngest will sleep through the night if I am not in the room with him!  Extra sleep is really important.

Fermented foods were huge in our recovery.  We drank 1 – 2 bottles (16 oz. each) of kombucha per day.  We also ate Bubbies pickles pretty regularly, and when we didn’t do fresh juice I made smoothies with yogurt or kefir.  I’m now creating a turmeric bug, and fermenting our own pickles and some jalapenos.  I take a probiotic supplement, too, especially on days where I only drink kombucha and don’t have other forms of probiotics.  This has been really, really important.

I’m now starting my home remedies to rebuild.  This includes:

I will continue with fresh juice sometimes, and we’re introducing sourdough and other soaked grains now.  We don’t even have white flour in the house (although we do eat it when out sometimes, or buy the occasional box of organic mac’n’cheese or sourdough bread made with it) and I hope to bake without it for awhile.

We were able to get out.  Thanks to some great deals on Craig’s list, we were able to replace most of what we owned.  We were able to heal and have access to quality foods and supplements.  We’re really so grateful for this.

This is the last post in this series, for now.  Down the road, I’ll write a wrap-up post once we’re months past this, healthy, and we’ve gotten rid of the house.  I’ll write the overarching story of what happened, and how we felt about everything changing the way it did.  It’s been a road with lots of ups and downs for sure.

Have you faced mold?  How did you detox from it?