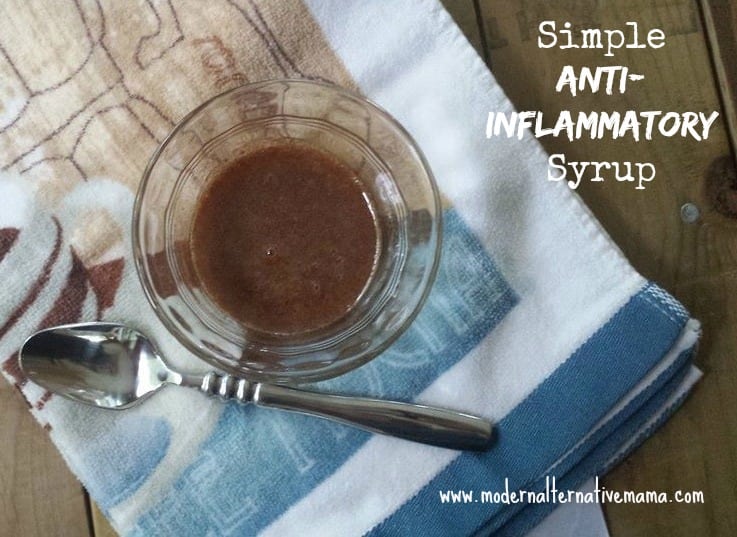 This post is sponsored by Ceylon cinnamon.  Which is really awesome stuff! Find out how you can use it to make an anti-inflammatory syrup.

A few months ago, my then 4-year-old sat next to me on the couch on a Saturday afternoon.  I noticed a very odd-looking rash on his legs, which he was scratching.  I asked him what it was — he didn’t know.

While I frantically began googling this strange rash, wondering about all the various (possibly bad) things that it could be, he went upstairs to show my husband.  My husband recognized it immediately and told me — “It’s poison ivy!”

Not at all dangerous, not contagious, but very itchy and annoying for a few days.  My husband is very allergic to poison ivy, and it seems our oldest son is, as well.  Twice this summer he’s gotten it, and the second time his face swelled up.  Both times he was extremely itchy and he had trouble sleeping the first night.

I quickly got smart though, and I mixed up this very simple, versatile anti-inflammatory syrup.  Using this, plus some bentonite clay paste on the rash meant he could sleep for 4 – 5 hours without itching.  Score for him, and for me!  (Because guess who was going to be up with him when he couldn’t sleep?)  The poison ivy also healed within just a few days.  That was so awesome!

The thing is, it’s not just for poison ivy.  It’s really for any sort of inflammation.  Anything that can cause redness, swelling, or illness.  So it could be used for:

Seriously awesome stuff.  And it tastes great, so kids like it.  Mine even ask for it when they aren’t feeling right.

There are a few ‘optional’ ingredients, too, which you can add depending on your specific symptoms and adjust for kids vs. adults.  Here it is!

Add all the ingredients to a small glass bowl and mix together.  Leave out the cayenne pepper for small children.  Cayenne is good for colds and congestion especially but also good for pain.  This mixture could be used daily as needed (you can’t overdose) for things like arthritis or chronic pain — but ask your doctor, of course, if you have a chronic issue.

I recommend one “recipe” every 4 – 8 hours for colds or poison ivy or other acute illnesses.  Since it’s food-based you don’t really have to worry about it.  Do make sure to choose Ceylon cinnamon and not cassia cinnamon though.

You might be asking, “What is ceylon cinnamon? How is it different than the cinnamon I have in my spice cabinet, and why do I care?”

Most cinnamon that you buy is cassia cinnamon, a cheaper form of cinnamon.  Cassia cinnamon is strong and “knock off” cinnamon.  Ceylon is known as the “true” cinnamon and it has a much milder flavor.  It sort of reminds me of nutmeg, in a way, but not quite.

I honestly prefer cassia cinnamon for baking — if I want a cinnamon ‘treat’ I use what I know!  But if I’m looking for something medicinal, I reach for Ceylon.  The Ceylon cinnamon has lower levels of coumarin (making it safer for those with bleeding disorders) and it’s non-irradiated and pesticide-free.  It’s a potent anti-inflammatory.

Studies show that Ceylon cinnamon helps to balance blood sugar in diabetics, and may help to lower blood pressure (and more).  For medicinal use, it really is important to choose Ceylon and not cassia, because of the high coumarin levels in cassia which can cause side effects.  Ceylon won’t do that.  That’s why I always use Ceylon cinnamon in this recipe.

What do you reach for when you need an anti-inflammatory?