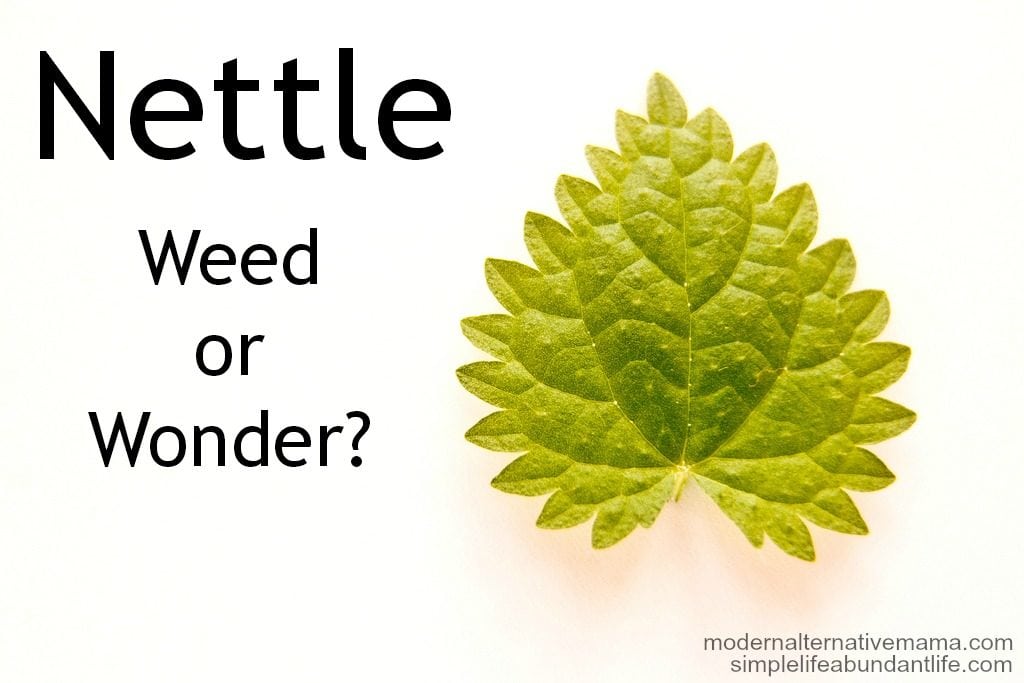 Several years ago I was completely clueless about herbs. Then I had an experience with  modern medicine that made me start to question some of today’s common practices.  I started researching, and the more I learned, the more I realized that God gave us so many powerful, healing things right in our own backyards.

I wanted to learn more about herbs and decided to pick one to start with.  At the time I was suffering from extreme fatigue, mysterious weight gain, and irregular cycles which I knew indicated a hormonal dis-balance.  (Later I would find out that I had Hashimoto’s thyroiditis – an autoimmune thyroid disorder.) Through my research, stinging nettle (urtica dioica) came up frequently as a great herb with so many different uses.  Here is what I discovered:

Nettle is an herb that many people view as a weed. It is sometimes called stinging nettle because it contains lots of fine hairs on it that contain chemicals that cause a stinging sensations to anyone who touches it. The stinging hairs lose their potency once the nettle has been steamed or dried. The leaves can be eaten and are said to taste a little bit like spinach. The root is also valued for its medicinal components.

Nettle is full of vitamins, minerals, amino acids, and more.  It is a highly available source of vitamins A, B1 (thiamine), B2 (riboflavin), B3 (niacin), B5 (panothenic acid), C, D, E, and K. It is also a great source of  chlorophyll, calcium, chromium, iron, magnesium, potassium, sodium, copper, and zinc.(1, 2)

Nettle contains many properties that are beneficial to our health.  It is anti-anemic, anti-diabetic, an anti-histamine, a diuretic, and a galactogogue. (1, 2)

Image by Sir_Iwan via Compfight cc

Through my research I discovered that nettle has been used for centuries for a variety of purposes. The most surprising use? For thousands of years, nettle was actually used to make clothes. “According to The Book of Herbal Wisdom by Matthew Wood, archeologists in China discovered perfectly preserved nettle clothing aging over 2000 years. Since then, nettle fiber has been used to make rope, and was notably used by the Germans in World War 2 for the manufacture of their uniforms.” (source) It seems a plant that is known for the sting it causes upon touch would not be a great option for clothing, but the stinging component of the plant quickly loses potency after being picked and is gone completely after being steamed or processed.

“Nettle has been used for centuries to treat allergy symptoms, particularly hayfever which is the most common allergy problem. It contains biologically active compounds that reduce inflammation. Dr. Andrew Weil M.D. author of Natural Health/ Natural Medicine says he knows of nothing more effective than nettle for allergy relief.” (source). For the research behind why nettle helps with allergies go here.

“The leaves and stems of nettle have been used historically to treat arthritis and for sore muscles. Studies have been small and not conclusive, but they do suggest that some people find relief from joint pain by applying nettle leaf topically to the painful area. A few other studies show that taking an oral extract of stinging nettle, along with nonsteroidal anti-inflammatory drugs (NSAIDs), allowed people to reduce their NSAID dose.” (source)

Note: Nettle can interact with certain drugs.  Always consult your healthcare professional before using nettle if you are taking medication. For more information go here. How to Drink Nettle

I like to think of my daily cup of nettle tea as my multi-vitamin for the day.  It is an acquired taste for some.  It is kind of a mild grassy flavor. You can drink it as a tea or as an infusion.

Place the dried nettle in the empty mason jar.  Boil enough water to fill the jar.  Slowly pour it into the jar on top of the nettles.  Screw the lid onto the jar tightly and let set for 4-10 hours.  Strain the nettles and drink the liquid.

Other Uses For Nettle

You can also add nettle to a variety of foods.  I like to add it to chili and chicken dishes. A quick Google search reveals a variety of nettle recipes from nettle pesto to nettle soup.

I will say that I can tell a dramatic difference in my energy levels on the days that I don’t drink nettle. I even bought some tea bags of nettle to take with me when we travel so I never have to be without it.

Note from Kate: Try it in this herbal multivitamin, or this prenatal herbal vitamin!

Have you tried nettle? How have you used it?