Why I Trust Natural Over Well-Studied |
AD 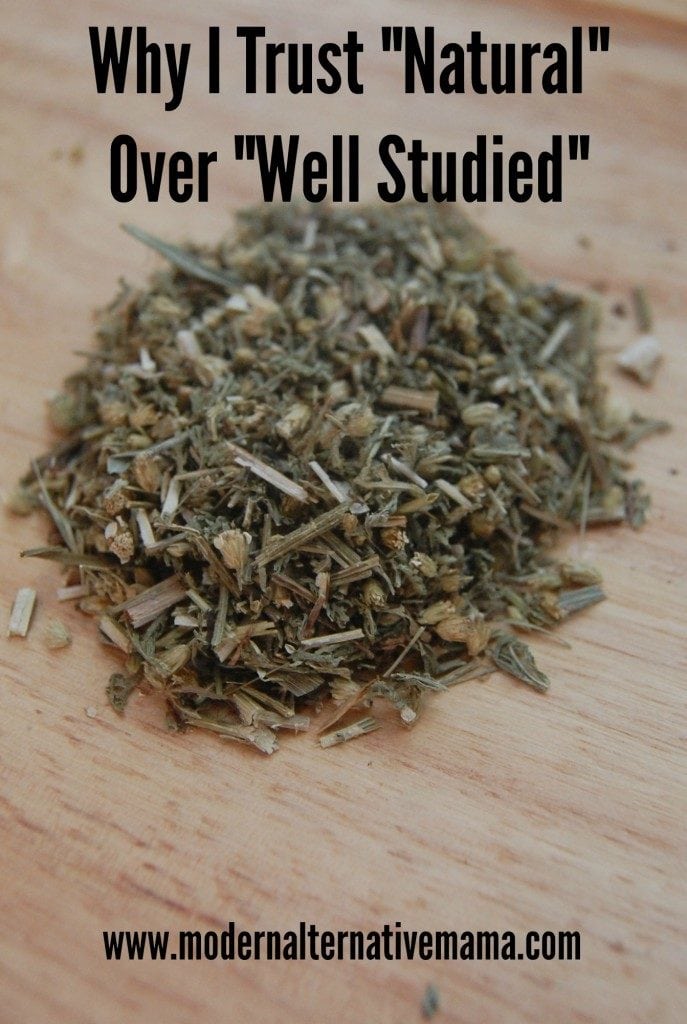 Why I Trust Natural Over Well-Studied This post might seem kind of…against the mission of this blog.  After all, I often work hard to read studies and share them with you, and show why, scientifically, my point on any given issue is valid.

I do think that science is important, and I find scientific evidence fascinating.  I love to see what has been studied and what works, especially in the natural realm.  Heck, I even like to see what doesn’t work in the natural realm, so I know where to focus my energies (and what to leave alone).  There’s absolutely a place for scientific research and I wouldn’t want to be without it.

That said…I have to give a slight edge to “natural” over “well-studied” in many cases.  It’s true.

A Reminder About Natural

I just have to say that “natural” does not equal “safe.”  Many people who oppose my viewpoint here will be quick to point that out.  They’ll say, “Arsenic is natural.  Lead is natural.  Spider venom is natural.  Gee, natural is really safe.”

While that’s ridiculous hyperbole (nobody thinks all natural things are safe — come on now), a lot of people do think any natural, non-poison is safe.  That is, that any herb we might use as medicine would be safe for anyone, in any dose, because it’s “natural.”

This is not true.

There are always a few stories of people who clearly hold this belief overdosing themselves or their kid on some inappropriate natural remedy and avoiding medical care, and ending up dead or hospitalized because of it.  Of course, the “skeptics” gleefully point to these stories as evidence that natural is dangerous and stupid.  No, that particular choice was dangerous and stupid, not all natural medicine.

But don’t be that person, okay?  Read about how to properly and safely use natural treatments and know when something’s serious enough to ask for medical help.  It’s all about balance, and there’s a time and a place for doctors.  I’m not arguing otherwise in this post.

In a general sense, I do still trust natural over well-studied, though.  Knowing everything I do, liking scientific research as much as I do, and feeling appropriately cautious about natural remedies, I still give the edge to natural.  Why?

There are Studies For Every Answer

First, typically, you can find a study that says what you want it to say, no matter what it is that you are looking for.  I’ve looked at many different issues and I’ve found “no benefit” and “statistically significant benefit” and the same with harm (none/some).  Or that two things probably are or probably aren’t related.

The point is, it’s easy to find conflicting studies and choose the one that matches what you already believe.  That’s why I don’t like to get into debates on the internet with people who keep throwing studies at each other, because there are tons on each side.

It’s rare that we ever come to “one” consensus on something in science (especially when it comes to human nutrition and medicine) because our understanding of what is good or bad is constantly evolving.  Which brings me to the next two points….

Studies Can Be Poorly Done or Manipulated

Not all studies are well-designed or well-run.

In some cases, scientists simply asked questions in a way that would provide them the answers they thought they would get.  Sometimes this is done on purpose to “prove” something, and sometimes it’s an accidental bias.  But it’s easy to design a study poorly or ask the wrong questions or fail to control for variables.  Or use a very small sample size, not follow up with participants longitudinally, omit “odd data points,” dismiss side effects as “coincidence,” etc.  It’s really not hard to manipulate study data at all!

In this article, a doctor has spent his career carefully evaluating medical research that’s being done.  And, “He charges that as much as 90 percent of the published medical information that doctors rely on is flawed.”  This isn’t a small or rare problem.

This is a major reason why, when someone says “We’ve done the studies and the conclusion is in; we know for sure; end of story” I do not trust them.

Studies Can Not Exist

Beyond the problem of thousands of studies being poorly designed, there’s the issue of topics simply not being studied at all.  I often run into statements like, “There’s no evidence for that….”  What they mean is, “We haven’t actually studied that” not “We studied it thoroughly and found it false.”

Just because something hasn’t been properly studied doesn’t mean that it wouldn’t be shown to be beneficial (or harmful) if it were properly studied.  Sometimes they simply haven’t looked at the issue at all.

A lack of evidence in medical journals shouldn’t be confused with “no evidence at all of benefits” and we shouldn’t ignore or avoid potentially helpful alternatives just because some research team somewhere hasn’t done the right study yet.

Thousands or Millions of Anecdotes CAN Be Data

When it comes to natural medicine (or, really, anything), enough anecdotes actually can be data.  Frankly, people publish case studies all the time.  Or gather up a small group of people who all report similar issues, hand them a survey, and then publish that.  These aren’t particularly robust research methods, but if it’s published in a medical journal it’s considered sound.

If, however, someone notices the same sort of data among hundreds or thousands of people and it’s not “official” or published, they’re told, “The plural of anecdote is not data.”  Uh-huh.

The truth is, if a particular herbal remedy has been used for hundreds of years, and it’s been known to be effective for certain conditions and not to cause harm (or only to cause harm under certain circumstances, such as during pregnancy or in extreme doses), there’s no reason not to use it (properly).  “We don’t have any evidence for that…” only means it hasn’t been published in a medical journal, not that there is literally “no evidence” out there.

Yes, sometimes claims can be exaggerated, and it can be hard to weed through those.  Have some common sense; no herb is a cure-all.  I don’t think it’s any more difficult to wade through these unregulated claims than it is to wade through published studies, given how inaccurate many are….

Natural simply makes sense to me.

In my opinion, we ought to go for the least possible intervention first, and/or the mildest possible treatment.  There’s absolutely no reason to run to the doctor at the first hint of a sniffle or a mild fever.  Not even for the start of an ear infection.

I definitely err on the side of “do less,” although I wouldn’t hesitate to “do more” if I saw concerning symptoms (such as trouble breathing, serious chest pain, unexplained fainting or seizures, extremely high fever — over 104 — or other potential medical emergencies).

We ought to use modern medicine, but use it much more cautiously than we do.  Our liberal use of modern medicine has led to antibiotic resistance (2 million people per year get an antibiotic-resistant infection and about 23,000 die), a 33% c-section rate (and more than 50% in some areas), a population that gets an average of 14 prescriptions per year (4.02 billion written in 2011), older adults who are on 5 or more prescriptions simultaneously, 1.7 million annual hospital-acquired infections, preventable medical errors are the 6th leading cause of death when killing almost 100,000 people per year, a maternal death rate that has tripled since the 1980s (and the only developed country where it’s increasing), life expectancy for some is going down….

We have one of the sickest populations, and yet we have one of the highest rates of medical interventions.  It’s pretty clear that our overuse of “the system” isn’t helping us.  There’s a point at which enough is enough.

I believe that we should use medicine, and doctors, where needed.  Where truly needed.  But not for “every little thing,” which we seem to be doing.  (All the lies we’ve bought about the safety of OTC medications, processed foods, etc. aren’t helping us any, either.)

Meanwhile, there’s plenty of evidence that honey can kill MRSA (more evidence), turmeric can kill cancer, and probiotics can improve health.  There is so much evidence, both anecdotal and scientific, that natural living or natural medicine actually works and it comes with few to no side effects.

This is why I endure the mocking from the so-called “scientific community,” who tell me that I’m silly to want to go natural, that I must eschew all modern inventions (clearly not or I couldn’t blog!), that if I don’t want the medical community’s help with everything I should expect it for nothing, that I just don’t understand science, that I’m too stupid and need doctors to save me from myself, and so on.

I get that sort of nonsense all the time, from people who don’t actually understand the issue.  They like to ignore the rational parts of this — that is, be cautious and judicious in your use of medical technology, not avoid it entirely — and try to make it sound crazy.  I don’t know why they do this.  I don’t know why, with all the problems the modern medical establishment is admittedly facing, they aren’t more interested in proven alternatives.  They ought to be, because in some cases, natural will soon be all that’s available (think antibiotic resistance).

How do you feel about natural vs. well-studied?