“Fat” is Not a Four Letter Word: Plant Fats |
AD 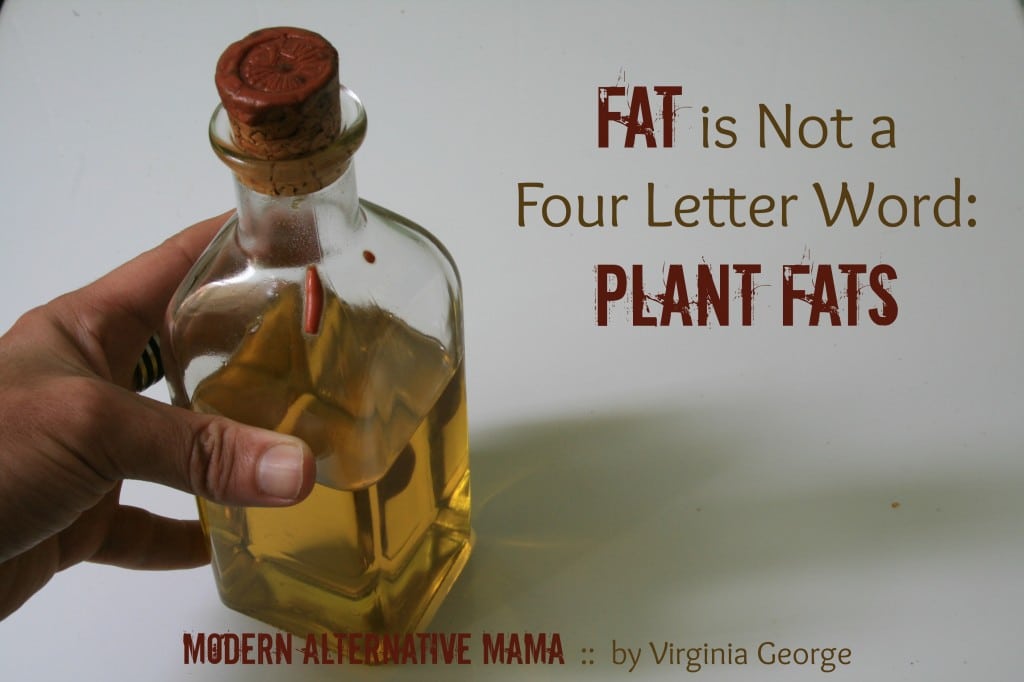 “Fat” is Not a Four Letter Word: Plant Fats

In our culture “fat” seems like a four-letter word, when in fact fat is essential to a healthy body. This post discusses several healthy fats from plants.

For years we’ve been bombarded with messages that fat is bad. We invented margarine (which is pretty disgusting if you read the history), built ourselves a food pyramid, and spent millions of dollars on huge campaigns to promote “low fat” and “fat-free” foods. Research is beginning to surface that questions whether the “low fat” and “heart healthy” propaganda we’ve been fed these last 30 years is really accurate.

When you think of the word “fat”, what comes to mind? A big tub of Crisco, a block of lard, or lumpy thighs? It’s likely the word “fat” doesn’t conjure up positive images. But what exactly is fat?

There are three terms that cover what we are talking about: fats, oils, and lipids. Fats are generally solid at room temperature, while oils are liquid. Lipid is a term that covers both. For the intent of this article, I will be referencing everything as fat.

Fat is, from the American Heritage dictionary:

To get even more technical, from Wikipedia, fats are triglycerides composed of glycerol and carbon chains. If you straightened a fat molecule out it would look much like the letter E. Fats are also a source of essential fatty acids. These are called “essential” because our bodies cannot manufacture them, they must be synthesized from our food. Essential fatty acids are things like omega-3, omega-6, and DHA, which has been in the news for infant brain development.

Why is Fat Important?

With all the negative attention fats get, it’s easy to think that perhaps we shouldn’t consume any at all. We have already talked about the importance of essential fatty acids in our diet, here are a few more fat facts:

Additionally, several vitamins like A, D, E, and K are fat soluble. This means that when you eat foods with those vitamins in them without any fat, the vitamins aren’t absorbed into your body. They must essentially be dissolved into dietary fat to be carried to your cells.

Fats are essential to cellular function and the health of our bodies, and even mainstream nutritionists suggest that 10-30% of the average person’s daily calories should come from fat. The question becomes not if we should consume fats, but rather which ones and which to use in each application.

It’s important to choose your fat wisely. Consider the properties of your fat before cooking or baking to make the best culinary (or cosmetic) choice.

Now that we know what fat is, why it’s important, and what to consider when choosing which fat to use, let’s take a look at several different kinds of fats and the health benefits of each.

Most fats from plants are considered oils, as they are liquid at room temperature. Many of these fats or oils are pressed from the seeds of the plant. Plant fats also tend to be higher in unsaturated fat than saturated fat, with the exception of coconut and palm oils.

There are a lot of different sources and kinds of coconut oil out there. I get mine from Wilderness Family Naturals, and all the processing information comes from their website. I cannot verify how other companies process their oil, but I firmly believe Wilderness Family Naturals oils are the best out there. They take great care in processing and are a pleasure to work with.

Coconut oil’s flavor and properties are influenced significantly by the way they are processed. All forms of coconut oil are extremely stable at room temperature and will not likely become rancid before you can use them up.

Coconut oil has been found to have more health benefits than I could possibly discuss in this article, but I will touch on a few things here.

Cholesterol and weight loss. Another study compared women with abdominal obesity and had them take a supplement of either 30mL of soybean oil or 30mL of coconut oil over a 12 week period. At the end of the study, the group that received the soybean oil supplement had a decreased BMI, but their cholesterol levels had increased. The group who supplemented with the coconut oil increased their HDL, decreased their LDL, and noticed a reduction in their waist circumference. (source)

Acne. A study was published in the Journal of Investigative Dermatology in April 2009 that found that lauric acid was effective to counter the growth of acne-forming bacteria at a concentration of 15x less than benzoyl peroxide, the active ingredient in some acne medications. It also shows no sign of damage to cells.

Lauric Acid. Almost 50% of the fatty acids in coconut oil are lauric acid, which is anti-bacterial according to the above mentioned study. Another study showed that lauric acid is effective in killing Group A Strep and Group B Strep. (source) Lauric acid is also relatively effective in deactivating the chlamydia virus. (source)

Polyphenols. The polyphenols in coconut oil lend to its anti-inflammatory effect. For this reason, you will see it as an ingredient in several balms and lotions, though some people find coconut oil drying to their skin. This may be because the coconut oil penetrates the skin to nourish instead of staying on top of the skin and providing a moisture barrier.

Olive oil is made from… olives! They are picked from the tree, crushed, mixed with water, and centrifuged. (source) There are many factors that affect the final product, including when and how the olives were picked, from what part of the world they were grown, how long between picking and pressing, and what further filtration and purification the oil has gone through.

Olive oil has a distinct flavor, so consider this when choosing your fat. Light olive oil has been run through more filtration to remove more of the color and flavor of the oil, it is not “light” as in “less fat”. The flavor of the oil is determined partly by where the olives were grown, from Spain’s fruity, nutty oil to France’s pale, mild oil. You may find a flavor profile you prefer, based on the region the olives were grown in!

Olive oil should be stored carefully, away from heat, light, and oxygen. Olive oil can become rancid even before you can smell it, creating free radicals that use up some of those amazing antioxidants you’re ingesting. Choose a dark glass bottle to store your oil in, or a nonreactive metal container, like stainless steel. Some metals can react with olive oil and create toxic compounds. Also, avoid plastic as olive oil can leach dangerous chemicals from the plastic.

Store your oil away from heat, so above the stove is not a good idea (ahem, I used to keep mine there). Cool, dry, and dark are your best bets.

Olive oil has been in the news for a long time because it is high in omega-3 fatty acids. In addition to the omega-3s, olive oil is high in vitamin E, an antioxidant possibly responsible for reducing damage to the eyes in age-related macular degeneration, heart disease, and cancer prevention.

Olive oil is thought to protect against a myriad of ailments from osteoporosis to cardiovascular health to diabetes to depression (source). These health benefits, unfortunately, diminish over time.

In a study that appeared in the May 2004 issue of the Journal of Agriculture and Food Chemistry, Spanish researchers tested virgin olive oil that had been stored for 12 months under perfect conditions.

What they found was quite surprising: After 12 months, many of the oil’s prime healing substances had practically vanished. All the vitamin E was gone, as much as 30 percent of the chlorophyll had deteriorated, and 40 percent of the beta-carotene had disintegrated. Phenol levels had dropped dramatically, too. (source)

Sourcing quality, fresh olive oil is important. Not only to avoid the free radicals from rancid oil but also to be sure all the health-promoting substances are still intact.

Olive oil also is high in polyphenols. Polyphenols are anti-inflammatory. One study suggests that consuming high-phenol olive oil could reduce the risk for colon and other bowel diseases (source), while another found that the polyphenols in olive oil reduced blood pressure in young women with high-normal blood pressure or stage 1 hypertension (source).

The polyphenols in olive oil are also antimicrobial. In fact, one study about food safety showed that olive oil (and vinegar) killed the most strains of bacteria in food and suggested that olive oil would be a good alternative to other oils in helping to prevent foodborne illness.

Because olive oil is anti-inflammatory and antimicrobial, it is a good choice for salves and balms. We use it to treat ear infections, and it is also a good carrier oil when using essential oils topically.

Flaxseed oil is made from the seeds of the flax plant. It is a very sensitive oil and goes rancid easily, so keep that in mind when choosing where to store your flaxseed oil. (source)

Flaxseed oil has a relatively low smoke point at only 225*F so it isn’t recommended for cooking. It has a nutty flavor and makes a great addition to salad dressing and smoothies.

Flaxseed oil has the natural foods community divided. Some believe it is a healthful oil and should be added to our diets, others disagree and won’t come anywhere near it.

Lignans. Flaxseed oil is also a good source of lignans. Lignans are a phytoestrogen that help regulate hormones and support the immune system. (source)

The last time I was at the store looking through the oils they had on hand, I picked up a bottle of vegetable oil to see what the ingredients were. It made me laugh because this “vegetable oil” was made from soybeans, which are legumes!

Vegetable oil is a light, mild oil that has been refined. It has a very high smoke point, 466*F if it’s soybean oil.

It’s difficult to ascertain the health benefits of any commercial vegetable oil unless you know which kind of oil is being used to make the vegetable oil.

There are many more oils to explore, like peanut oil, sweet almond oil, and avocado oil. It is my desire that you will try new things, and no longer shy away from the word “fat”. It’s time we embrace the beautiful healthful fats we have available to us instead of feeling guilty for “indulging” in these tasty additions to our diet.

Is “fat” a four-letter word in your kitchen? How will you begin to use these healthful plant fats in your home?