Why the “Trash Natural Birth” Movement Needs To End |
AD 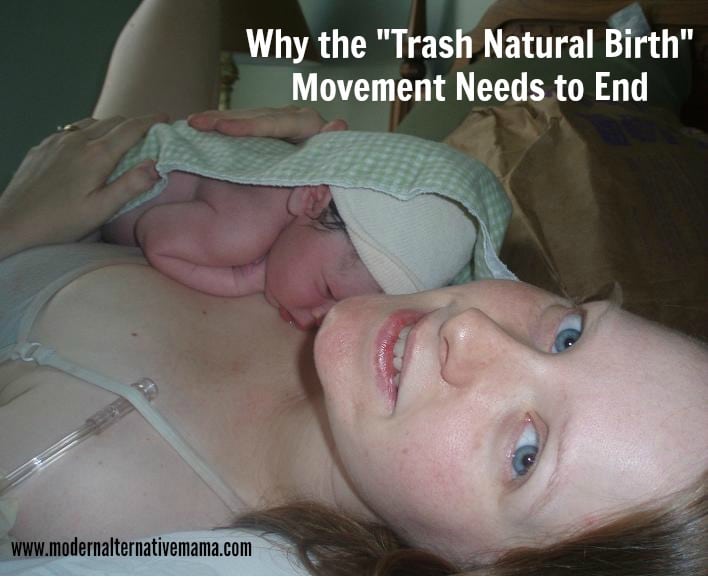 Why the “Trash Natural Birth” Movement Needs To End

It’s kind of ironic that after writing about the effective ban on water birth yesterday that I ran across this piece of drivel today.

Don’t click on it.  Don’t even give the author the satisfaction of more page views.  It’s really not worth your attention, or the five minutes of your life that you will never get back.  I’ll sum it up for you here: it’s a so-called feminist who feels that when it comes to birth, the doctor is the birth plan, and that by demanding choices or refusing interventions, you’re trying to one-up other mommies and induce guilt.  In other words, she’s busy doing the usual “trash natural birth” that’s become so popular.

I wouldn’t even bother to respond to it, except that this nasty theme keeps popping up, over and over.  The “natural” community is really taking hits now, from an audience of supposedly tolerant, progressive people who both don’t know and don’t care to understand what they are about — a wonderful testament, to be sure, to just how tolerant they really are.

It’s become par for the course, though.

We’re really not supposed to question the status quo.  We’re not supposed to have opinions about our lives or our bodies, especially when it comes to medical care.  We’re not really in charge of it.  See, someone else can make better decisions than we can about our health care.  Someone who’s been to medical school, and therefore knows “the” answers when it comes to birth (or child-rearing).  To question them is to insult their very dedication to their profession.  After all, they are here for our benefit.

The idea that a self-proclaimed feminist can actually advocate that women lie back, shut up, and let the doctor do their job when it comes to birth is immensely appalling to me, to be honest.  I ought not surrender my body when it comes to sex, or to abortion — those are my choices to make — but the minute that I want to give birth to a child, suddenly my body belongs to someone else?  And not even to the baby (for whom I would willingly choose whatever is needed to make him/her as healthy and safe as possible), but to a third party — to a doctor?  How can any feminist not see a problem with this logic?

Of course, logic is clearly not this author’s strong suit.

The author posits that the natural birth community is basically a cancer on human society.  That is my summation of her piece, not her words.

In this “article,” she explains that the natural birth community has “turned labor into a defining moment in women’s lives, their first chance to prove just how devoted a mother they truly are.”  This, apparently, is a bad thing — it’s the absolute beginning of the Mommy Wars, and therefore, it should be stopped.

As far as I know, labor has always been a defining moment in a woman’s life.  That was true long before this generation of women began fighting for their right to control their own bodies and make their own decisions during the birthing process.  If you meet any woman who’s had children, ask her for her birth story.  It doesn’t matter if the baby was born last week or 40 years ago, she remembers, and she’ll likely tell you.  What’s more, she’ll still feel powerful emotions about it, whether positive or negative (or perhaps a bit of both).  This is something that’s always been — not a new phenomenon.  It’s obviously true for this author as well, or she wouldn’t feel moved to even write this nonsense.

The second part of that statement?  “…their first chance to prove just how devoted a mother they truly are.”  Wow.

The only one who’s interested in turning birth into a Mommy War is women like this author.  You see, I had three natural births — home births, actually.  I would be a part of that “natural birth” community she’s trying so desperately to flog with her nonsensical arguments.

I didn’t make the choices to have my babies naturally, or at home, because of what political message it would send.  I didn’t do it because I wanted to be a part of some “community.”  I didn’t do it because I thought it would make me a superior mother.  In fact, I didn’t care what anyone else was choosing for themselves at all, or what the peanut gallery might think of my choice.  I actually chose to birth naturally because — and this is crazy — I wanted to.

I chose not to have an epidural because of potential side effects.  I feel uncomfortable in hospitals.  I wanted to have my babies snuggled against me and ready to breastfeed immediately after they were born.  I wanted these things, and I felt they were better for me and my babies.

This is not, however, a judgment of other mothers.  My saying “this is what I felt was best for me” is not the same as “…and if you feel differently, you’re a bad mother.”  If this author is reading guilt and shame into the message, that’s some psychological problem on her part and nothing that I’m saying.

It’s possible for women to have natural births because they actually want to have natural births, and not because of what kind of mother they’ll be in another’s eyes.  I think it’s pretty sad and a little shameful to make major life decisions based on what others’ opinions are or might be.  That’s why I’m glad, as an adult, I don’t have to take other peoples’ thoughts into consideration when I make my choices.

Birth as a Political Movement

After stating that her doctor is her birth plan and that women are only giving birth naturally to prove something to a crowd (who, I assure, could not care less how you give birth), the author takes a bizarre left turn and starts discussing feminist politics.

It really never even occurred to me to consider what my plans for giving birth would say about me politically.  Honestly, it didn’t.  Apparently, though, this author thinks that it does, or that it should.

Her argument here is so ridiculous that I’m almost not sure where to start.

Apparently, in order to be a true feminist, we need to accept epidurals (which our fore-women fought to get, you know).  We also need to just trust our doctors — this, too, is progressive.

I’m appalled that anyone who calls themselves a feminist would possibly make the argument that there is one right way to give birth.  Isn’t true feminism about choice?  Shouldn’t a true feminist support women, regardless of where and how they want to birth (or if, perhaps, they don’t want children at all)?  Unfortunately, this author is an example of what is wrong with modern feminism — only her version of feminism is feminism at all.  All those other women?  They don’t appreciate what feminists fought for.

We have a term for women who think like this.  It’s misogynist.  If you believe that your way is right and all those other women are just plain crazy…

The political theme continues as the author then tries to drag celebrities who have had natural births through the mud, equating this with a clear “two-tiered” system in our country.  Apparently, only the spoiled rich people want natural births.  They only do it because they’re out of touch with reality and don’t have to fight just to get access to a hospital.  They can “play” at natural birth by having one, while surrounded by a medical team who can help in a moment if anything goes wrong.  This is apparently the ultimate in elitism.

I don’t know why anyone needs to twist a mother’s desire to do what’s best for her and her baby (please note: her and her baby, not “all mothers and babies everywhere”) into elitism.  Who does that?  It’s rather elitist that the author can sit here and mull over why women make the choices they do with birth and why those choices are wrong — shouldn’t she be spending her time worrying about making the next decisions in her son’s life instead of judging other women?

I’ll be honest: yes, there is some judgment in the natural birth community, towards women who do not choose natural birth.  Sometimes women do look down on other women who choose epidurals, or scheduled inductions or c-sections.  Sometimes they ask (whether with positive or negative intentions) if a woman tried hard enough or did enough research before she gave birth.  Yeah, it happens.  It shouldn’t, but sometimes it does.

That, however, is because people are human.  It doesn’t excuse the behavior, but it also doesn’t mean that we should reject the natural birth movement entirely.  It doesn’t mean that we should judge these women harshly for choosing natural birth.  How does judging women for choosing to birth naturally make it okay that other women judge those who choose not to birth naturally?  It’s like the author is trying to punish people who birth naturally for hurting her or making her feel guilty about her choices by hurting them and trying to make them feel guilty and selfish.

In the end, the author doesn’t shed any light on a new issue; she merely adds to the existing Mommy Wars by insulting those moms with whom she disagrees.

The natural birth community should remain strong.  They should continue to support women who desire to give birth naturally and provide information on natural birth to those women.  Unlike what the author says, there are real benefits to choosing to give birth naturally.  It’s not for everyone — I’m never going to claim that — but it should absolutely, 100% be a viable option for those who want it.

You’re not more or less of a mother because you had an epidural, or a hospital birth, or a home birth, or a c-section.  We all have a birth story.  All of those birth stories matter.  We don’t have to bend to the bullies who say that birth shouldn’t or doesn’t matter, or who say that anyone who does it “this way” is a bad mother, didn’t do her research, or is an exhibitionist looking for attention.  That’s just hyperbole, intended to direct the readers away from the author’s own insecurities.

Don’t worry about others’ insecurities.  Just worry about doing the best you can for your own life.  You make the right choices for your body, and your babies, regardless of what those are.  We support you in whatever those are, even if others don’t.  We believe in you.

How do you feel about this “trash natural birth” movement?