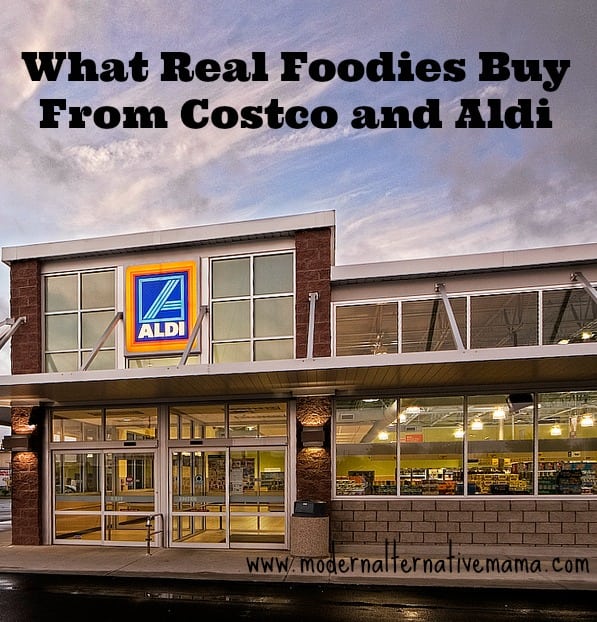 Real food is really important to my family.

I’m guessing it’s pretty important to your family, too.  I believe that real food should be accessible to everyone, and that means that it has to be easily available, and it has to be affordable.  Telling families “Just go to your local farmer” or “Shop at Whole Foods” isn’t feasible for everyone, either because these aren’t available, or they are too expensive.

I understand.  We’re on a budget too. That’s why I wanted to write this post.  I wanted to highlight all the great options that can be found at regular stores, like Costco and Aldi.  These are two stores I shop at quite often.  They’re affordable, and they are easy to find for most people.

If you don’t have these choices, I have found a lot of great items in most any grocery store now, if you stick to the fresh meat, fresh produce, and natural/organic selections.  I like Costco and Aldi because I find them more affordable than regular grocery stores.  Since I shop in those two a lot, they are the ones I’m sharing with you today.

Thankfully, real food has gotten “popular” enough that even mainstream stores are offering it, and even actively promoting it.

I’m glad for that.   Just 5 – 7 years ago, real food was really hard to find.  There was little awareness of GMOs, or corn syrup, or artificial colors or flavors.  Health food stores were the only places to even think about finding real food, and the choices there were even more limited than they are now.

With more and more people pushing for healthy options, more stores are starting to offer real food.  A lot of grocery stores are even developing their own product lines!  Kroger has “Simple Truth,” and Giant Eagle has “organic and natural” throughout the store.  Lots of places have good options if you read labels. I’m hoping to save you a little time today by shedding light on two of my favorites!

What Real Foodies Buy at Aldi

Within the last year, Aldi launched their “Simply Nature” line.  This is a line of both organic and natural options (not all products are organic).  Many of the ones I’ve found are quite good, both in health and taste.  The ingredients are pretty clean, and they avoid artificial colors, flavors, corn syrup, and other yucky stuff. Here are the products I’ve personally tried or read the label of and would buy:

What Real Foodies Buy at Costco

I discovered Costco sometime in 2011.  In fact, I remember introducing a friend to it late one evening on August 4th that year.  I simply had to do everything that day…bake a million pitas, hit the farmer’s market and buy several bushels of produce, and then close down Costco.  I remember the date because I went into labor that night with my third baby, who was born early the following morning.

I let my membership lapse for awhile in 2012 but picked it back up in early 2013 when I realized I was begging my parents to take me there every time they visited (every two weeks).  I’ve had a membership consistently since then — just renewed it for 2014.  I was elated when they built a new location that is practically across the street from me, which opened in October 2013.  Not that the old one was far (about 15 min. away) but having it that close is just awesome.  Yes, I’m spoiled.

(They are building a Whole Foods practically next door to Costco now, and there is a Trader Joe’s half a mile away.  Yes, I’m really spoiled.)

Anyway, I could easily drop a few hundred each time I go, if I weren’t sticking to a careful list and budget.  There’s just so much awesomeness.  I have to restrain myself and stick to whole foods ingredients and not the fun snack foods.  Most of the time. Here’s what I buy (or would buy):

Obviously, there are a lot of choices there! Mostly we stick to cheese, butter, and fruit/vegetables.  We occasionally buy some of the other items, but the large packages add up quick.  Options also change seasonally.  The peas and raspberries (which are in season in late summer) stopped being available in the middle of the winter — too bad!  I’m sure they will come back later.

Most of our grocery shopping is done at these two stores, plus local farms for meat, eggs, and milk.  (This is both cheaper and higher quality for us.)

What do real foodies buy from Costco and Aldi in your area?