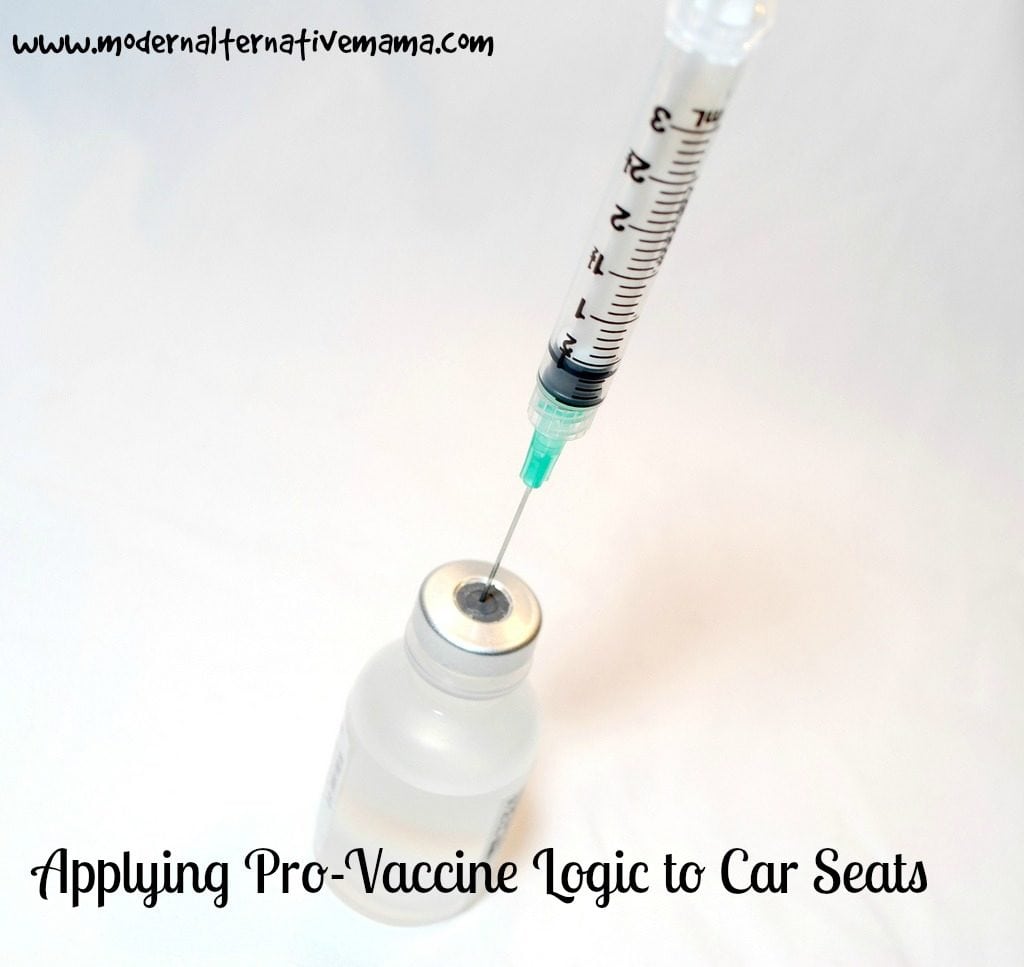 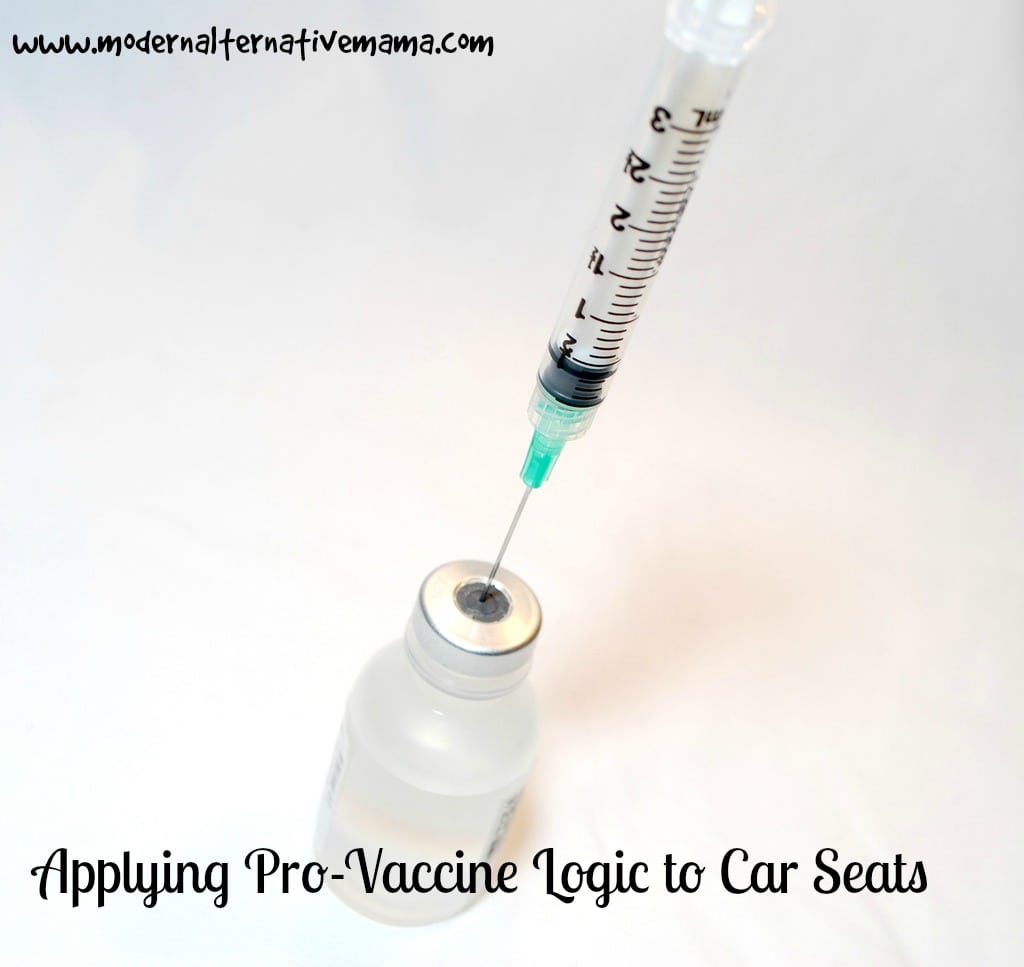 **Note: I’m well aware the original article was satire.  I thought it was poorly done and used a ridiculous comparison to make a point.  I’m responding to it not because I think it was serious — really, like I could believe someone is recommending against car seats?! — but because a lot of people do think that vaccines are kind of like car seats, i.e. “prevention” and may be swayed by the original nonsense.  And by the way, if you’re commenting just to tell me that I’m stupid, I missed the point, I’m selfish, or you are otherwise rude or condescending, I’m not publishing it.  My blog, my rules.**

There’s a new vaccine propaganda piece circulating, comparing getting your children vaccines with making your children use car seats.  If you’ve been around here before, you might know I’m not a fan of the first, but I’m firmly in favor of the second.

The post was illogical at best.  Everyone who’s done any serious research into vaccination could see that immediately.  Unfortunately, though, it was put on a very popular website and a lot of parents who haven’t looked into vaccines a whole lot might be swayed by this…unfortunate…piece.

So, I sighed and clicked anyway.

Let’s just go ahead and break this down, bit by bit.

Shaming is NOT the Way to Get Your Point Across

It keeps popping up, though, so I keep addressing it.

By the way, if you believe that vaccines should stay a family’s personal choice, you’ll want to check out this post.  Help us speak out for parental rights.

Let’s just start with that.  Vaccines are nothing at all like car seats.  When you put your child in a car seat and use it properly, there is no risk to them over 99% of the time (assuming you don’t get into an accident).  If you do get into an accident, then there is a tiny risk of injury, but the chances of the car seat protecting your child are far, far greater than any risk of injury.  Unless you don’t use the seat correctly, in which case malfunction and injury risk goes up, but that’s not because of the car seat, that’s because of user error.  (Learn to use your car seats properly.  But that’s not the point of this post.)  There is also no benefit to getting into a car accident without a car seat.  There is no benefit to being injured or killed in a car crash — and death is pretty darn likely if your child is under 5 and not strapped in at all.  Car crashes, in fact, are the #1 cause of death in children 5 and under.

In contrast, every single time you inject a vaccine, there is a risk of injury.  Every single vaccine carries a list of potentially dangerous ingredients.  For some children, the potential risk from a vaccine far, far outweighs any potential benefit.  For others the risk-benefit analysis isn’t as clear.  But there is always a risk.  A vaccine is simply nothing like a benign car seat.  That was mistake #1 in this post.

Now let’s look at the actual claims in this article, piece by piece….

“… something like 99.7% of babies diagnosed with cerebral palsy had been brought home from the hospital in a car seat. “

This is the first completely illogical statement.  Cerebral palsy is a birth injury.  It would be diagnosed before a baby ever got into a car or car seat.  If the condition occurs before the correlated event, then, well, it isn’t correlated at all!  Unlike vaccine injury, which occurs after vaccination….

“How could a baby be safer anywhere other than in its mother’s arms?”

Outside of car, this is usually true.  In a car, it’s absolutely false and everyone knows it (or should).  An infant’s weight is multiplied times the speed at which the car is moving.  A 10-lb. baby in a 30 MPH crash is a 300-lb. weight and the mother could not hold onto it.  This is basic physics.  Comparing this to vaccination is…crazy.

Doctors do not get kickbacks from car seats.  They do get kickbacks from vaccine manufacturers.  What’s more, they get reimbursed more from insurance companies if their patients are fully vaccinated.  It’s why some of the doctors in my area who used to be okay with a parent’s choice are now pressuring parents to vaccinate.  They aren’t getting reimbursed for visits if their patients are vaccinated.

“They may not be automotive engineers, but their parental gut feelings are good enough.”

It does not take an automotive engineer to examine the car seat research, watch the crash test videos, and realize how much safer car seats are for children.  In fact, it’s blatantly, clearly obvious.  Vaccine science, on the other hand, is more complex, but parents can still make sense of it.  It doesn’t take an expert in either case.  This is deliberately telling parents they’re too stupid to make an accurate decision because they are “just” parents and they are only going on their “guts” — not the evidence they can see for themselves, which they’re plenty smart enough to understand.

“Parents are carefully steered to “research” that hypes the dangers of CP.”

This is just offensive.  There are actual risk factors that can increase the likelihood of CP (and it’s not car seat use) and parents should be aware of the information!  The same goes for vaccines.  Doctors aren’t sharing the actual risks.  They aren’t discussing the situation honestly and openly with their patients or patients’ parents.  Parents have no choice but to go out on their own, seeking information.

“Do a large double-blind trial: Randomly assign some babies to car seats and some to be held in mom’s arms and see how many in each group develop CP, they cry. It will take nothing less to convince them.”

…and exactly why can’t we do this study with vaccines?  Is it because they are so clearly amazing that to withhold them would be unethical?  Oh yes, that is the logic they use!  If they are so determined to prove vaccines are safe and have nothing to do with autism or other developmental disorders, why don’t they just do the study already?  It’s their “gold standard,” after all.

“There is a small uptick in infant fatalities that steadily grows as more and more people refuse to use car seats, but not many people take notice.”

Despite that, yes, more parents are refusing vaccines, and more people are catching these illnesses, death rates are not higher!  Nobody has died of measles in more than a decade, despite thousands of cases.  Very, very few have died of pertussis (5 – 20 per year).  In contrast, much greater numbers are dying or being permanently injured by vaccines.  Nobody wants to talk about that, though.  That is perfectly acceptable.  (The total number of deaths from vaccines isn’t high compared to, say, deaths from car accidents.  But it’s a good 4 – 5x higher than death from diseases we vaccinate for.)

Basically, this post starts with an absolutely ridiculous premise (that CP is somehow related to car seat use, even though first car seat use occurs after a CP diagnosis, not before) and then goes on to make logical fallacy after logical fallacy, with a good dose of shame and anger thrown in for good measure.

Get Vaccine Information From Good Sources

I think it goes without saying, but I’ll say it anyway: don’t get your vaccine information from poor sources such as this one.

Instead, look for actual published studies.  Look for factual books written by doctors.  Look at data from the CDC and the WHO.  Those are valid sources of information.  This sort of drivel, is not.

If it’s presented as a way of mocking parents who disagree, don’t even waste your time.

If it contains actual facts and maintains a respectful and balanced tone, at least give it a read.  You can choose to discount it if you want.  But please, look for real sources.  Not this shame-anger nonsense.

What did you think of this ridiculous “pro-vaccine logic” analogy?