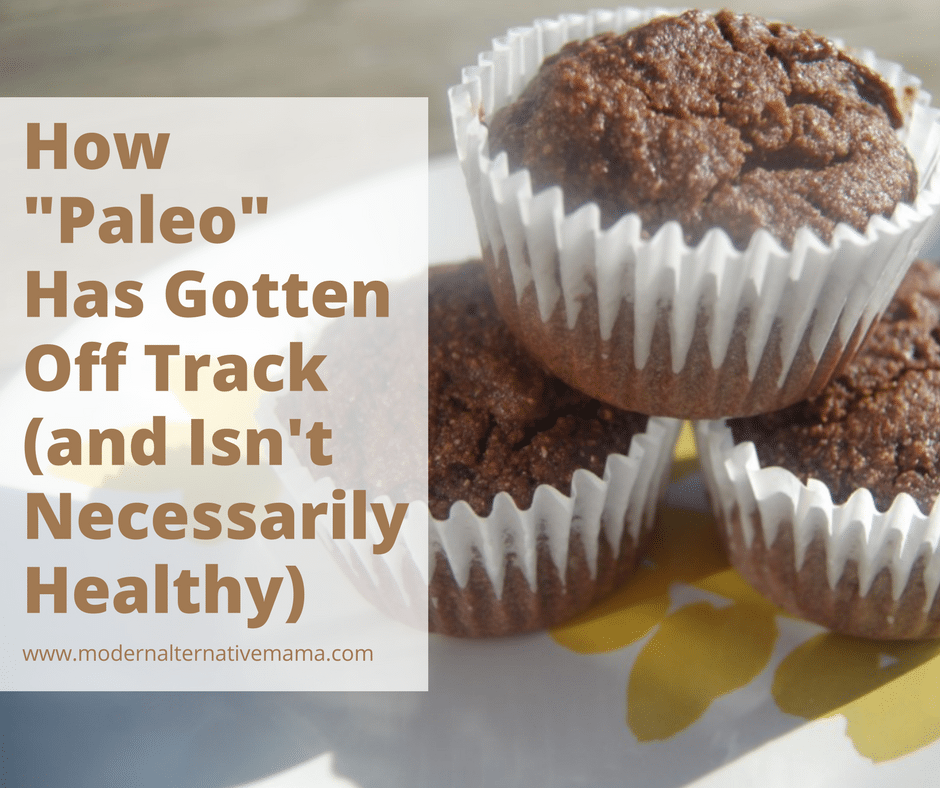 How “Paleo” Has Gotten Off Track (and Isn’t Necessarily Healthy)

A lot of people have tried to get healthier by going Paleo.

I get it.  Paleo, now, is about like vegetarian was in the early 90s (at least if my dad’s health kick at that time is anything to go by).  It’s a diet that’s purported to fix your health concerns because grains and dairy are basically the devil and no one should eat them.  There are people who say that they have more energy, their allergies have disappeared, they sleep better, their autoimmune conditions are better managed and more — all because they’ve gone Paleo.

If it works for you, great.  I’m not going to tell you to change.

However, I don’t think Paleo is a cure-all.  And I don’t think it’s right for everyone.  It will be a good fit for some people, just like any other diet.  But all people are individuals with different needs.  I don’t believe that any food group is so terrible that nobody should ever eat it again.  If we listened to everyone who found out which food(s) didn’t work for them, we could eat no meat, no dairy, no grains, no nightshades, no high-salicylate foods…  Basically, we’d have nothing left to eat at all.  So I say, figure out what makes you feel strong and healthy and eat that.

That is not what this post is about, however.  It just needed to be said first, so my perspective on “proper diet” is crystal clear: choose what works for you.

The bigger problem is what Paleo has become, as it’s become more popular.

The original Paleo diet is basically this:

It’s basically anything that a hunter-gatherer would have eaten.  They didn’t cultivate or domesticate, so they would not have had eggs, dairy, or grains.  Also they would not have necessarily had specific types of meat (it would be whatever they hunted).  They would have had access to whatever fruits or vegetables were growing, as well as nuts.  The general focus, in modern times, is meat, nuts, (some) fruits, and vegetables.

It’s an admirable goal.  Although it’s not right for everyone.

This is not what Paleo actually looks like for most people, though.  It typically looks more like this:

A modern Paleo diet includes basically everything a non-Paleo diet does, just with different ingredients.  That is, they bake with nut and coconut flours, use coconut sugar and honey liberally, and may include raw dairy.  (This is usually called “primal,” which indicates that it’s loosely based on Paleo, but it’s not as strict.)

Why is this a problem?

Over Consumption of Nuts

Since grains aren’t allowed, a lot of people on a Paleo diet tend to go overboard on the nuts.  But really, would a Paleolithic man, who had to use a rock to smash open a nut’s hard shell, have bothered to do that enough to get a couple hundred at once?  No…he would have done only a small handful.  There are about 50 almonds per cup of almond flour, which is far more than a handful.

This is a problem not only because it’s not true to Paleo historically, but also because many nuts are very high in omega-6 fatty acids.  Those are the ones we get too much of.  So if you’re swapping out your vegetable oils for lots of nuts, you’re not necessarily doing (much) better.  (Yes, nuts are also high in good fats, and yes, we need omega-6s.  But too much of anything is not so good.)

Over Consumption of Sugar

I’ll just say it: Paleo desserts and baked goods are not actually Paleo.

There’s no way that a Paleolithic family would have figured out how to combine ingredients to make the complicated cakes, muffins, tarts, and other treats that we now make and call “Paleo.”  We call it Paleo because it involves Paleo-legal ingredients.  But really…this follows the letter of the law, but entirely ignores the spirit!

A big reason why people go Paleo is to improve their health.  Whether you’re eating cupcakes made from white flour and sugar, or coconut sugar and almond flour, you’re still eating cupcakes.  It’s still too much sugar (if consumed often).  And I get it — sometimes you need a little treat.  Just be honest that treats in any form (except for, say, fresh berries) are really not Paleo at all.

We’re lucky these days in that we have an abundance of food available to us all the time.  It’s shipped in from areas of the country where it is seasonal, or it’s frozen or canned, so it’s available year around.  There’s nothing natural about peaches in January.

The biggest issue here is, again, the overconsumption that is possible.  Someone could get too much sugary fruit (and I know, a lot of people — especially kids — prefer the sweet taste of fruit to vegetables or meat).  There’s a reason why seasonal eating is good.  We can gorge on what’s available for a short time, and then we don’t have it again for awhile.  That’s really how it should be (mostly).

Why Do I Care?

Well, honestly, I don’t care what you eat.  That’s your business, not mine.  And if you feel great on a Paleo-like diet (even if that includes the occasional paleo-friendly baked good), that’s cool.  Enjoy.

I’m writing this for the people who have newly run across Paleo and think that they can jump on the bandwagon and still eat all their old favorites, just made with new ingredients.  For people who haven’t done a whole lot of research into what foods are really healthy and in what quantities.  For people who are more interested in “the answer” than figuring out what individually makes them feel the best.

If you eat “Paleo” but rely heavily on nut flours, baked goods made with them (especially ones that are high in honey, coconut sugar, etc.), or other “modern” foods made with Paleo ingredients, you are not going to improve your health a whole lot.

The reason Paleo improves many peoples’ health is that they cut out most sugar and eat a whole lot more fruits, vegetables, and real meat.  You can do the same thing and still eat grains and dairy unless you personally have an issue with those (physically or ethically).  Paleo is not a magic bullet, and especially not if you include a lot of “cheat” foods.

Do not kid yourselves.  There’s nothing “healthy” about lots of fruit or sugar or vegetable or nut oils (any that are high in omega-6s) no matter what you call the diet.

Include a few treats now and then.  Use the ingredients that make the most sense to you.  (Yes, I occasionally bake with nut flours and use nut butters.  Yes, I also use wheat.  And dairy.  And basically every other food, sometimes.  I like to mix it up and not rely too heavily on any one food.)

Just don’t get caught up in labels.  Don’t try to find ways to cheat and still stick to the “right” diet.  If you don’t have a gluten intolerance, then the occasional “normal” cupcake is not going to hurt you.  Ignore any diet with a name and just eat the food that works for you!

What do you think about the current Paleo diet?