CPS: Should You Call and How to Cope |
AD 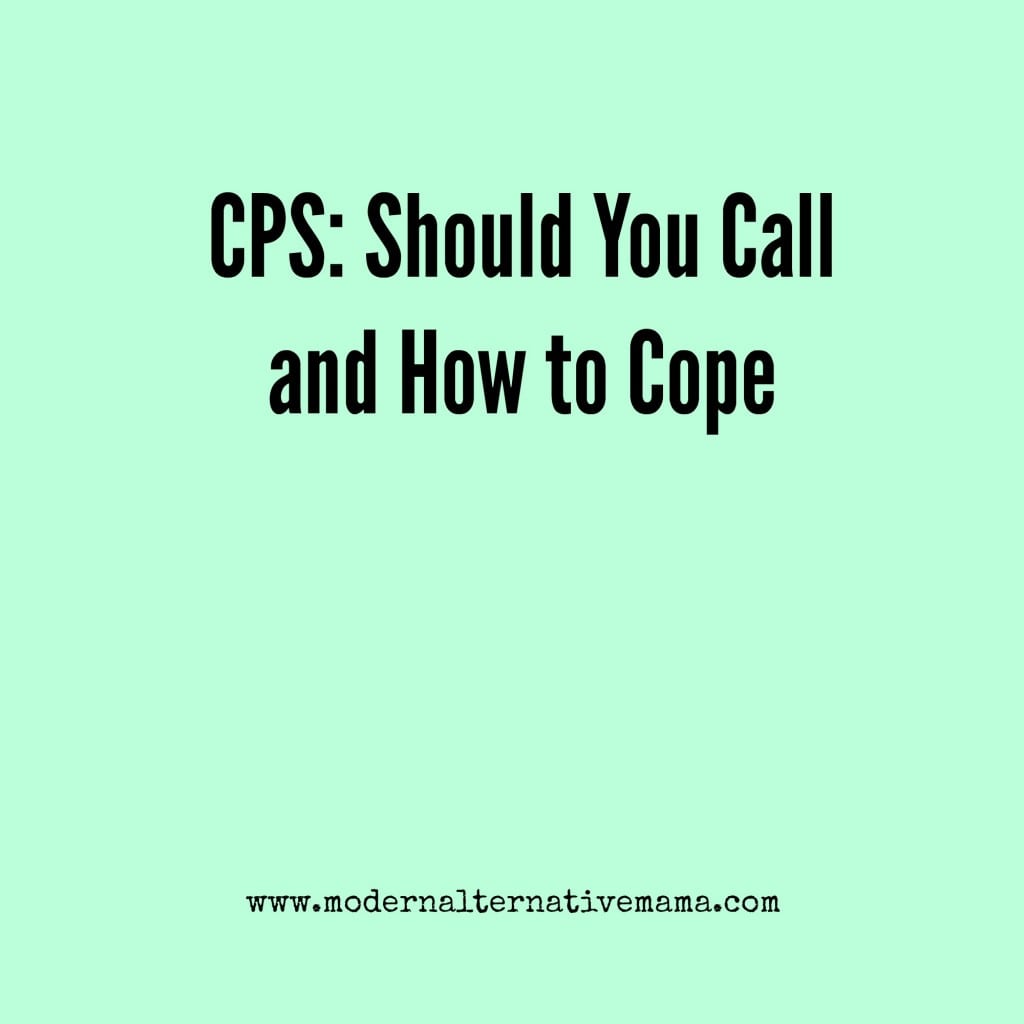 CPS: Should You Call and How to Cope

Recently, a blogging colleague of mine dealt with false reports made about her family to CPS.

This is one of my nightmares.  CPS knocking on my door, saying, “We’re from children’s services, and we’re here about a call…”

Most social workers only want to protect children.  Typically, they want to keep the children in the home as much as possible.  Studies show that this usually leads to the best outcome, even if the home situation isn’t so great.  It’s only if the home situation is actually dangerous (parents are leaving for days at a time, not buying food, getting high, abusing the children physically or sexually) that removal is the better option.

If you didn’t know, in most states, children’s services are required to follow up on every call they receive.  That means they have to send out a social worker to talk to the family once or twice, including interviewing both parents (if there are two) and the children.  After the interview, they have to review the case, call references, make a recommendation (that either it’s unfounded and there will be no record of the call, or that an investigation should be opened) and write a final letter.  This takes a few hours of their time to complete.

Meanwhile, there are children who really need help who are not getting it, because CPS is too busy with the unwarranted calls they’re getting.  Yes, in some cases, these calls were made with good intentions, but other calls were made from spite or a total misunderstanding of what the system is for.

I believe that in extreme cases, the system can do good.  But I also believe it is misused and abused by many, both within and outside.

When to Call CPS (and When Not To)

Some believe you should never call CPS.  Instead, if you truly believe there is a dangerous situation, call the police to check.  If they believe the situation warrants, then they will call CPS to investigate and help the children.  When in doubt, this is probably the right call.  It’s okay if you suspect a real problem, to call the police and have them check up on someone.

If you do want to call CPS, then these are times that you should consider it:

These types of extreme situations are exactly why CPS exists.  If you know or suspect that any of these are occurring, you are justified in calling — and should definitely let someone know that the family needs help.

The following situations, however, should NOT result in a call to CPS:

In some of these situations, if you feel concerned (for example, if children in their yard were playing near the street or in another potentially dangerous way), it might be warranted to call the home or knock on the door yourself to express your concern.  If you have a concern, but it appears to be a rare situation in an otherwise safe family situation, either address the parents yourself (respectfully) or just mind your own business.  If the home is generally safe, then you should not call CPS, even if an occasional situation is unsafe.

(In my colleague’s case, one — true — accusation made against her was that her 8-year-old son was playing in the snow without a coat on.  But this was not dangerous.  Kids get hot and take off their own coats while playing outside from time to time and an 8-year-old can manage his own coat-wearing.  In a safe home, this is a total non-issue.)

What If CPS Shows Up

What do you do if CPS shows up at your door?  You hear a knock, and upon answering, find a person wearing a badge, and who says, “Hello, I’m from Children’s Services.”

It’s a nightmare for a lot of parents, that someone would call on them even though they’re well-meaning, loving people.  Remember, first and foremost: social workers want to help people who are in trouble, and they have to follow up on every call they receive.  If your family has no issues, not much is going to happen.  It’s still scary, so here’s what to do.

When someone from children’s services is on your doorstep, step outside the door and close it behind you.  Anything they can see in your home will go in their report.  That means if there are toys all over the floor, or dirty dishes on the counter, it will get written down.  Since the first visit is usually unannounced and you may not be “ready,” step outside.  If you have children at home and awake (and there is no other adult present), you may not be able to close the door or you may need to take your children with you.  Definitely step outside.

It is not the social worker’s fault that someone called on you.  Do not take out any anger or frustration you might feel on them.  If you do appear angry, it may help to say, “I’m not angry with you, I know you’re just doing your job.  I’m frustrated with the person who called.”  Use that if needed — “I know you’re just doing your job.”  Speak politely and answer questions briefly.  Typically, this initial meeting is just to set up a time for the social worker to meet with your whole family.  It should only last a few minutes.  When you do have the “real” meeting, be polite then too.  This is usually as far as it goes, and it’ll be more likely to end as nothing if you are polite.

Ask for the Official Complaint

Ask for the social worker to read you a copy of the official complaint.  This is so you know what is being said about you and you can respond to the accusations.  In some cases, the accusations may be entirely untrue.  Or, they may be partially true but require explaining.  If for any reason you feel that the person who called (they can’t legally tell you who) is harassing you, you do have the right to file a harassment charge with the police, but you have to know who it is.  Knowing what the complaint says may let you know who called.

A small note: in most states, good-faith reporters (including mandatory reporters, like teachers) are protected from prosecution in the event that their claim ends up being unsubstantiated.  However, people who call in to harass others and abuse the system are not protected, and you can file a restraining order or harassment charge.  If it is an ongoing issue, where one person is calling on you repeatedly for things that should not be called about (see above), I’d advise filing a legal complaint.  That’s not legal advice, and see a lawyer if you need legal advice.  That’s just what I’d do if that happened to me.

Before the official meeting (CPS has to meet with every member who is living in the home), clean your home well.  Do all the dishes, vacuum the floors, dust.  Make it as clean as you can.  It’s unlikely that your home being disorganized or messy is going to come up as an issue, but don’t take that chance.

In these initial stages, the best thing you can do is cooperate.  If you work with them and show them you are a happy, healthy family, they will move on to families who actually need help, because yours doesn’t.  If you are cagey, refuse to answer questions, or act ‘weird,’ then they may decide that your family needs to be investigated.  Just answer their questions honestly and briefly.

Do not, however, give more information than requested.  Don’t talk about struggles that you have (unless you want them to suggest ways they can help; which will mean opening an investigation).  Don’t sign forms giving them permission to access your child’s medical records.  Just answer simply what is asked.

If, for any reason, the initial meeting with the whole family is not the end of it, and CPS decides to open an official investigation, call a lawyer.  Do not agree to their “plans.”  Do not agree to anything without a lawyer.  I have no personal experience with this and neither do any people that I know personally, but I have heard stories of people who were trying to cooperate and agreed to plans — and ended up with long-term intrusion in their lives and loss of their children for failure to keep up with the plans satisfactorily.  Also, I have heard stories about people who ultimately did not have to deal with all these issues because they refused to sign plans.  I am not an expert, though, so get yourself a lawyer if an investigation is opened.

I look at CPS as a sometimes necessary intrusion.  There are families who truly need CPS — families who do not supervise their children at all, where parents have addiction problems, where there is actual abuse happening.  Those families need intervention and those children need protection.  There are also a lot of families who get called on who are loving, stable families who may have made a mistake or two, or who have vengeful neighbors or family members.

I hope this is a helpful guide on when (or if) to call CPS.  The wrong phone call could ruin a family’s life…and so could a lack of a phone call.  Use your best judgment.  And if CPS ever shows up at your door, don’t panic.  It happens to many families, especially “alternative” ones at some point or another.  Cooperate, remain calm, and everything should be okay.

Have you dealt with CPS?