When It’s Not a Choice: Measles or Driving While Tired |
AD 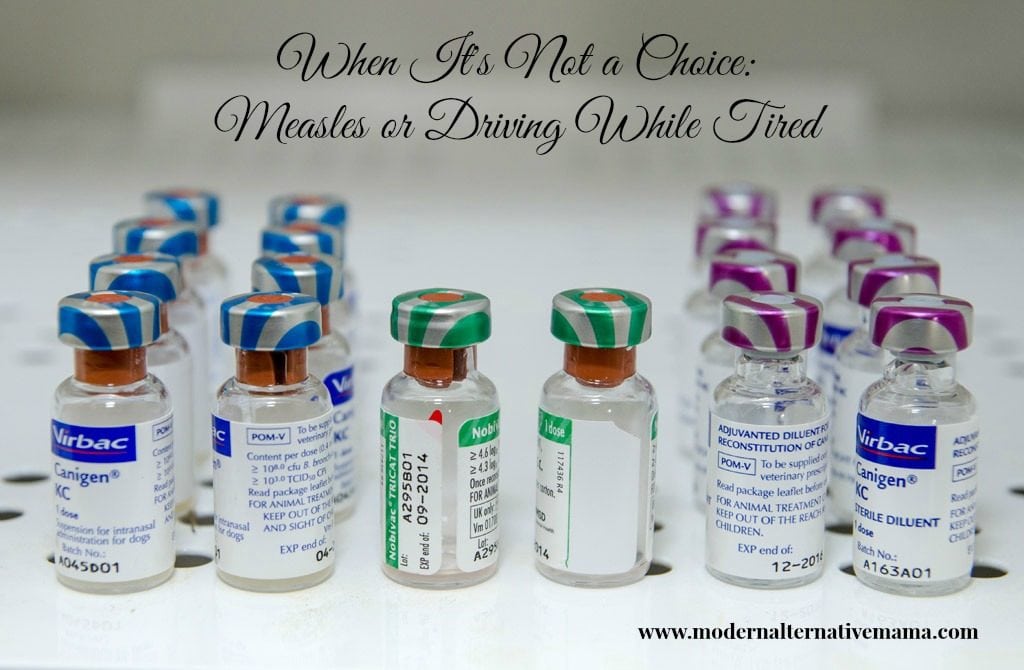 When It’s Not a Choice: Measles or Driving While Tired

Sick of the same, tired-old “herd immunity” line: the choices you make could impact others, so vaccinate to protect all those other kids out there? Find out why it’s nonsense.

More nonsense about vaccines and herd immunity popped up in my feed today.

It’s the story of a young boy with leukemia, who is exposed to the measles while in the hospital.  The mother passionately describes her stress at waiting out the 21-day incubation period, praying her immuno-compromised son doesn’t end up developing the measles.  She begs parents to vaccinate so we have herd immunity because if you don’t, it could affect children like her son.  (He did not catch the measles.)

I’m sorry for the family.  Truly.  I cannot imagine the grief and difficulty that families who have children with cancer or other serious medical issues go through.  It must be terribly stressful for them.  And I’m glad their little boy didn’t end up getting the measles.

I don’t, however, feel so charitable towards the people who are currently using this family.  They’re using this mom to emotionally manipulate people into vaccinating.  They ought to be ashamed!  Emotional manipulation has no part in a discussion as important as this one.

The manipulation, of course, is the same, tired-old “herd immunity” line: the choices you make could impact others, so vaccinate to protect all those other kids out there.  But, it’s complete nonsense.

We All Affect Others

Vaccination is not a magical situation.  It is not different than other scenarios where what we do might affect others.  There are many decisions we make every day that could potentially affect others — but we don’t think of their needs before our own, do we?

You might be thinking, “I always think of others!  I would never do something that would negatively impact them!”  Okay.  So you have never:

I’ll bet every one of us has done these at one time or another.

I know, you’re saying — “Those don’t really matter.  They might make someone a little upset, but it’s not going to hurt anything.”

Very true.  But there’s something that most of us have done at some point, something that some do often, that really could hurt someone.   That does hurt people.  And not only is it not illegal, but we only offer quiet advice on how to avoid it.  We don’t bully people who do it.  And it’s an actual, real, causing-serious-issues problem right now.

Have you ever woken up from a rough night, yawning, feeling very tired…but knowing you needed to leave for work or school anyway?  I have.  Have you ever found yourself drifting off while driving?  Have you ever desperately tried turning the radio up, opening the window, drinking coffee, etc. to keep yourself awake?  It’s been years…but I have.

The National Highway Traffic Safety Administration conservatively estimates that 100,000 police-reported crashes are the direct result of driver fatigue each year. This results in an estimated 1,550 deaths, 71,000 injuries, and $12.5 billion in monetary losses. These figures may be the tip of the iceberg, since currently it is difficult to attribute crashes to sleepiness. (source)

It’s pretty clear that driving while tired is something people do a lot…and which can have drastic consequences for others.  At least 1550 deaths per year?  Yet…do we shame and bully people who drive while tired?  Is it illegal?  Is it even an issue we’re discussing?

No, we’re too busy bullying people who don’t vaccinate.

Many choices that people make can have consequences for others.  Driving while tired certainly can.  Yet if we’re faced with the choice to drive while tired, or skip work, how many are going to skip work?  Almost none.  Most will grip the wheel, swig some coffee, and hope for the best.  This is demonstrably far more dangerous to others than not vaccinating.  It represents a clear, immediate danger each and every time you are on the road and are fatigued.

Unlike an unvaccinated child, who is generally healthy and not a threat.

The point is, there’s no escaping that our decisions can and do affect others.  We don’t live in a bubble.  And we don’t ostracize people from society because they’re more self-interested than into the good of society.  That’s human nature.  It’s normal.  And honestly?  You can only control you, not others.  You can’t erase the risk that you face, or might pose to someone else, every time you leave the house.

The vaccination decision actually affects people quite a lot less than other issues do.  Yet we’ve blown it completely out of proportion.  We’ve decided it’s this massive, crazy risk that’s worthy of bullying, shaming, ostracizing others.

Let’s be real: 1% of children 5 and under are deliberately unvaccinated.  That is not a large number.  Meanwhile, there are millions of drivers on the road…and you don’t know how many may be impaired in some way.  It’s a much, much, much greater threat.

So let’s just put it all into perspective.  If you’re bullying parents who don’t vaccinate their children because of some perceived future potential threat to your children, you’re ignoring much bigger, immediate threats.  You have no leg to stand on with this argument.  None.

I hope this is the end of the “vaccinate for the herd” argument.  Because it really is quite silly.  Each family should do what is best for them, whether that’s vaccinating or not, and leave everyone else alone.  As I said — you control you, not others.  And you do not have a right to live in a world where people care more about your family than about their own.  Period.

How do you feel about “herd immunity” as an argument?