Dear Everyone: Stop Judging Moms on Their Phones |
AD 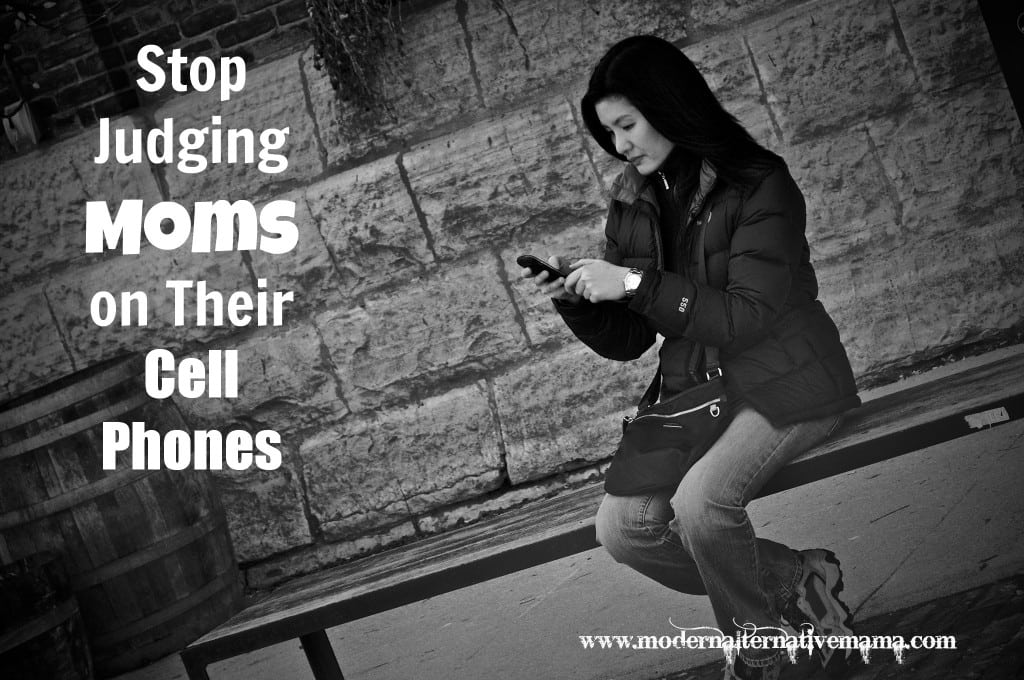 Dear Everyone: Stop Judging Moms on Their Phones

Recently, I was busy dealing with some nonsense in the online world.  It was over the recent, controversial posts I wrote about vaccines.  And hey, I know it’s a hot topic and I expected it.  I was ready for a break, though.  I packed up my kids and went to meet some friends at our local Whole Foods, for some snacks, conversation, and play time for the littles.  Being away from the computer was going to be a breath of fresh air.

And it was.  Mostly.

While The Kids Play….

Whole Foods has foam mats that are covering the play area.  The kids like to take it apart and stack it up, make it into a “hopscotch” mat, and so on.  We allow them to do this, as long as they keep it out of peoples’ way, and we clean it up before we leave.  While they were doing this, I quickly snapped a picture of my breakfast (an everything bagel with garlic-and-herb Kerrygold butter plus kombucha, if you’re curious) and went to upload it to the Modern Alternative Mama Facebook page.  While I was doing this, a woman walked up to me.

Her: “Are these your kids?”

Her: “Was this like this when you got here?”

Her (super annoyed voice): “Maybe you should get off your phone.”

Me: (fuming) “I got this.”  (Many other, less charitable things ran through my mind that I didn’t say.)

Meanwhile, my friends were right nearby, chatting, paying no more and no less attention to their children than I was.  They were just as “distracted” as I was.  The only difference?  They weren’t on their phones.

Stop Judging Moms on Their Phones

I have no doubt that if I, too, had been chatting with friends, or if I had been reading a paper book, or really doing anything but using my phone, the woman wouldn’t have said anything.  Oh, she might have said, “This is in the way, can you move it?”  Or she might have just glared.  But she would not have said “Stop talking to your friends” or “Stop reading that book.”  She would not have assumed that I was an absentee parent if I were distracted in these other ways.  It was only because I was using my phone.

A phone is not a magical device.  It is no more and no less evil than any other form of distraction.  Sure, it can be misused.  But that’s not your problem if someone else is doing it.  It’s never okay to judge a mom for being on her phone.

For years, parents have gone to playgrounds with a book in hand.  They sit and read while their children play.  But no one’s ever written a post called “Dear Mom Reading a Book, Stop Reading and Play with Your Children.”

For decades parents have gone to playgrounds to sit and chat with their adult friends while their children play.  But no one’s ever written a post called “Dear Mom Chatting with Friends, Stop Talking and Play with Your Children.”

The implication is clear: using a cell phone is the highest and most offensive form of distraction for parents.  It’s unacceptable.  It’s in a class all its own.  It’s nothing like reading a book or talking to a friend.  It’s different.  It’s bad.  And because it’s a cell phone and not a book or a friend, you’re clearly an absentee parent who’s missing their childhood.

What is wrong with people?

Beyond the fact that it is utterly ridiculous to single out phone use and not any other form of distraction, people need to remember that they don’t know others’ circumstances.

You don’t know.  You can’t possibly know.  Don’t treat a mom like a stereotype.  Don’t treat her like she’s a bad parent.  Don’t assume you have any clue about her, her life, or her children.  Because you have no idea.  You just can’t.

If a mom’s on her phone, don’t single it out.  Don’t treat her any differently than you would a mom who is daydreaming, reading a book, or chatting with a friend.  If her kid needs something and she hasn’t noticed (and no, not your opinion of what her kid is doing, but the kid is crying or doing something actually dangerous), then feel free to say, “Hey, is that your kid?  I just noticed and didn’t want him to get hurt.”  You don’t need to add in your judgmental “And maybe if you got off your phone you would have seen it.”

It’s just not your place.

Every parent has been “that” parent, who is checking their phone, or lost in conversation, or just frankly not watching when their kid does something.  Every parent has brought their kid to a playground so that they can just take a break.  You don’t know if that mom has had a sleepless night, if she’s spent the entire day playing with her children, or what — you have no idea.  To assume a mom is an absentee parent because of what you see in a split second — or even thirty minutes — is just wrong.

But mostly?  Get off your high horse.  You’re not magical.  Not using your phone much doesn’t make you a better parent.

In fact, I often lose my phone and rarely ever use it.  It drives my husband crazy!  But I don’t think that I’m better because I rarely use it.  I don’t think I’m more engaged, more loving, more involved, because of whether or not I (usually) use my phone.  Plenty of my friends use their phones more than I do and they are just as good as parents…maybe better.  Phone use is not equal to parenting competence.

Next time you see a mom on her phone, cut her a break.  Assume you have no clue why she’s on it.  And even if you see her on it the whole time you’re there, assume you don’t know why, what her day was like.  Don’t make any rude comments to her.

The world would be a better place if we all assumed the best of each other.  If we offered grace.  If we reacted in love.  Let’s start that…with one person at a time.

How do you feel about judging moms who use cell phones?