Dear Vaccine Pushers: I Don’t Vaccinate and You Can’t Make Me |
AD 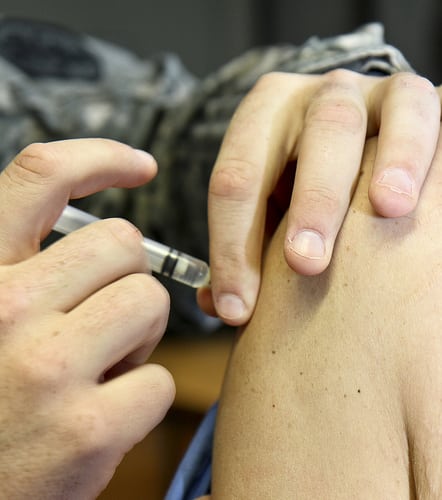 Dear Vaccine Pushers: I Don’t Vaccinate and You Can’t Make Me Okay, the title is childish.  I know.

It’s just that every time a few people catch a simple disease (like measles or pertussis) — from which the vast, vast majority recover with no issues — we have to start the media circus.  And the media uses the opportunity to shame, bash, and belittle parents who don’t vaccinate.  Those parents then go in and try to be reasonable, try to explain their position, and basically defend themselves.  They’re heaped on by a majority who think they are crazy, tin-foil-hat-wearing loons (yes, that word was used recently) who shouldn’t have a choice in the matter…and maybe shouldn’t even have children at all.

So here you go, vaccine-pushers: I don’t vaccinate, and you can’t make me.

The biggest reason people want me, and everyone, to vaccinate is herd immunity.  They claim that unless 95% or greater of the population is vaccinated, that we all risk these diseases beginning to circulate again wildly — and that the elderly, infants, and immunocompromised will be at serious risk.

But, sure, ignoring all that.  Oh no!  We might have an uncomfortable week!  (And yeah — if your child is immunocompromised, I understand that you want to take extra precautions.  I know that nothing in life is simple for you and I’m not trying to make light of that.)

Bottom line, though?  I make the decisions that are right for my child.  I do.  With no input from you or anyone else, unless I choose to consult them.  And I’m not asking right now.  I’m not willing to put my children at risk on the tiny chance that it might someday prevent another child from getting a disease (that most likely won’t harm him or her).

No, I don’t think it’s selfish to say that.  In fact, I think it’s selfish for people to ask me to vaccinate when I’ve made a decision not to.  That’s right — you’re being selfish to try to force your will onto me.  Vaccines are not without risk.  In fact, there are thousands of reports of children who have died or been permanently damaged by vaccines.  But vaccine pushers are going to tell me that that doesn’t really happen that often, and it doesn’t really matter, that it’s “worth it” to “save” some other children.  (Never mind that vaccine reactions are much more common than most people know, and that severe complications from the disease themselves are quite rare….)

I’m sorry, but having my own child dead or damaged isn’t worth it to me, to possibly save another child from an uncomfortable week.  Not by a long shot.

I will not be bullied into vaccinating.  I won’t place my child at risk to possibly help someone else’s child.  I.will.not.  And don’t ask me to, either.  You don’t have that right.

Some of you say, okay, fine — don’t vaccinate.  But then don’t ever come out in public.  Don’t go to libraries, to public schools, to anywhere that your child might “infect” someone else.

I say, do you know how silly that is?

First, unvaccinated children are not disease carriers.  Under normal circumstances, they’re as likely as anyone else to catch something.  Most of what they’re likely to catch, we don’t vaccinate for anyway.  The norovirus (stomach flu) that’s been going around this year is truly nasty…but we don’t vaccinate for it.  I don’t see this as being any worse or different than measles.  Yet if my family inadvertently gave it to someone else, they would just say “It happens.”  But if my family somehow gave someone measles?  They might flip out.

It’s not different, people.  These illnesses are pretty equally bad.  And pretty equally “fine,” in the sense that you will recover with no lasting damage.

Our responsibility to society is simple: don’t go out in public if you are sick.

There’s no reason to keep healthy people out of the public sphere just because they haven’t had a vaccine.  It’s ridiculous.  It’s paranoid.  It’s bordering on obsession and insanity.  And I’m honestly not blaming most who think this — it goes back to the media.  They’ve done a great job of scaring people into vaccinating, and against those who choose not to.

I Don’t Care About Jenny McCarthy

Just a few more things.  If you honestly are curious about why I don’t vaccinate, I’d be happy to tell you.  And if you leave the conversation saying, “Thanks for sharing, I’m still vaccinating my children,” then that’s just fine with me.

But if you want to know why I do what I do, do not say any of these things:

These statements are untrue and infuriating.  I don’t care a bit about what Jenny McCarthy does and know very little about her personal beliefs surrounding vaccines.  I’m well-educated and capable of understanding science and thinking for myself (as are many, many others, including several with medical degrees who think the way I do).  I certainly love my kids and want what is best for them, and would never knowingly put them at risk.

Honestly, when people say these things, the conversation is over.  Anyone who says them is not interested in learning any information that isn’t available in the mainstream media.  They’re not interested in understanding why people think differently than they do.  They only want to bully.

And you know, I believe in people.  I believe that whether parents vaccinate or don’t, that they are capable of making the choice for themselves.  I believe they are smart enough to understand the information that’s out there.  I believe they love their children and want what is best for them.  I have no problems with people who say “Vaccinating works for us.”

It’s the pushers.  The pushers who tell me I don’t get it.  The pushers who will comment on this post, patting me on the head for my “attempt” at “understanding” but who irritatingly, condescendingly, explain to me why I just don’t have the intelligence or scientific background to make a conscious choice for myself.  Who tell me that I ought not to have a choice.

This post was written for those people.  You want to be condescending and ignore the actual evidence I share?  Fine.  But understand this: I don’t vaccinate, and you can’t make me.

How do you feel about the vaccine debate and parents who don’t vaccinate?