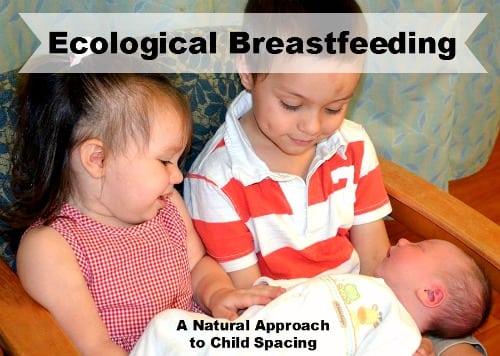 Editor’s note: Today’s post is from Danielle Faucher. Danielle is married to her best friend, Nathan, and together they have three young children. She is a music teacher turned homeschooling mom. She has a passion for fun and creative ideas, a desire to feed her family delicious and nutrient-rich foods, and loves to fill her mind with new information. You can follow her adventures at Raising Little Treasures.

My husband and I were abstinent until our wedding night, almost six years ago.  During our engagement, we had decided we would accept a child when God was ready to bless us with one. To our surprise, after returning home from our honeymoon, we purchased a pregnancy test during our first shopping trip as a married couple. We stood in the bathroom together and stared at those two pink lines; in shock, in gratitude, and in awe of our future.

Nine months later, our beautiful bundle was born. We brought him home from the hospital and started enjoying the new addition to our family. A few weeks later, we had to decide how we would want to space our children. It was, and still is, a desire of ours to have several babies, but what if we had Irish twins? What if I got pregnant as fast as I did the first time? How could we handle it financially? Emotionally? Could my body physically carry another baby so soon?

We had discussed the idea of Natural Family Planning before our wedding and had every intention of abstaining whenever I was fertile until we were ready to conceive again. I bought a thermometer, printed charts, and started tracking every little change in my body. I watched my charts but, with the absence of a menstrual period, there wasn’t much to track. This is when I realized there was some truth to “you can’t get pregnant while breastfeeding.”

Breastfeeding can be used as a form of child spacing. Now before you start saying, “but I got pregnant and I was breastfeeding!” “It doesn’t work, my child was conceived at only 3 months postpartum!” There are rules. And, every woman, every baby, every body is different.

The following are the Seven Standards of ecological breastfeeding*:

1. Do exclusive breastfeeding for the first six months of life; don’t use other liquids and solids.
2. Pacify your baby at your breasts.
3. Don’t use bottles and pacifiers.
4. Sleep with your baby for night feedings.
5. Sleep with your baby for a daily-nap feeding.
6. Nurse frequently day and night, and avoid schedules.
7. Avoid any practice that restricts nursing or separates you from your baby.

When I first read these “rules,” our first child was a few months old. I realized that I had been following each as part of our own parenting philosophies. Even with this new knowledge, I continued to watch my charts. I bought pregnancy tests in bulk and took them obsessively. How else was I supposed to know if it “failed?”

When our son was 13 months old, my cycles returned. I continued to chart, but my husband and I decided not to abstain if I did indeed ovulate. Five months later, we were overjoyed that God had blessed us with our second child. With the use of only ecological breastfeeding, our first two children were spaced 26 months apart. We have since welcomed our third child into our arms, 24 months later.

Image by Digital Grins and Giggles

I followed all the rules, now what?

The average woman has 14.6 months of lactational amenorrhea (lack of menstrual period due to breastfeeding).** The chances of pregnancy in the first 3 months is almost 0%, months 3-6 2%, and around 6% after 6 months if a menstrual period has not started.*** Often times, a “warning period” will come before the first ovulation. In my personal experience, my cycles return but I do not conceive for 5 months. During this time, I do not stop following the seven standards. By reacting to my baby’s needs, I remain infertile. I watch their independence grow and have always been able to predict when my fertility would return.

Have you ever spaced your children using Ecological Breastfeeding? How far apart are they in age?