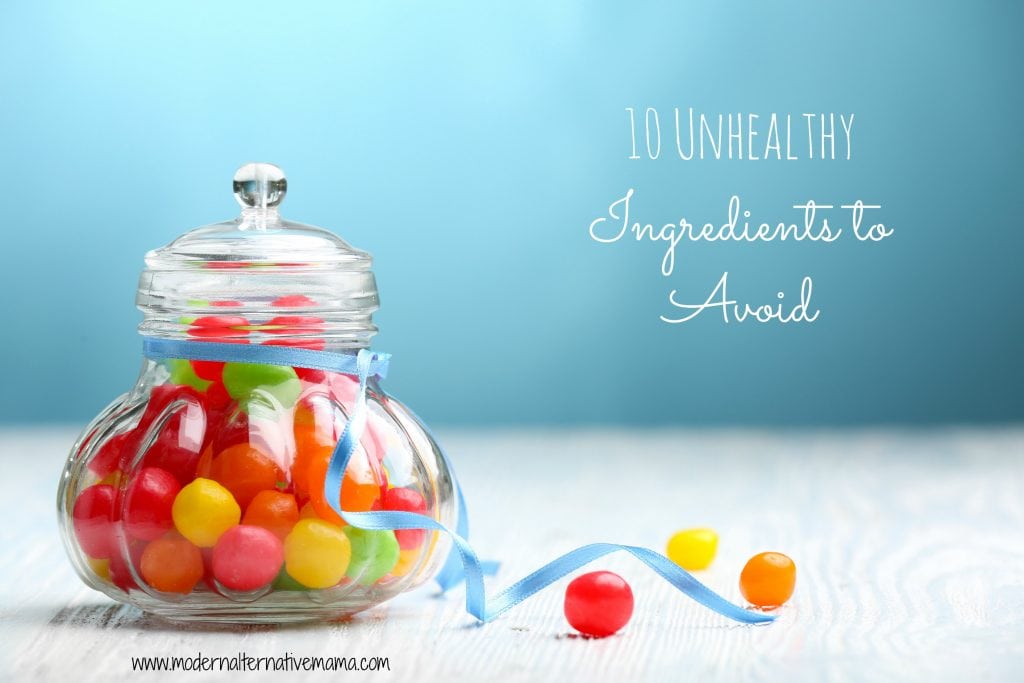 Reading the labels on foods these days is not a simple task.  Many times, there are foods that have some “good” (recognizable, real food) ingredients, and some “questionable” (what is that? is it okay?) ingredients.  While foods with only “good” or only “bad ingredients are usually a simple choice, foods with a mixed ingredient label are uncertain — should I buy that?  Is the quantity small enough not to hurt me? Is this one of the ingredients to avoid?

Rather than continuing to guess, getting frustrated, and tossing the product somewhere (whether in the cart or back on the shelf depends on the day), let’s take a look at some of these ingredients.  Then, you can make an informed choice whether or not you want to buy products containing it.

This isn’t an extensive list, by any means, but these are some of the most common food additives.  You will find most of these even in organic/natural products, which is why I picked them (instead of food dyes, modified food starch, etc. that are typically only found in conventional products).

Here are 10 unhealthy ingredients to avoid.

What it is: Cellulose is another name for “wood pulp” or “plant fibers.”  It’s usually made from cotton or wood but can be made from other plants as well.

Where it’s found: It’s used in bread, ice creams, flavored milk, and shredded cheese.  It adds fiber, replaces oils and flours (it’s cheap), and keeps cheese from sticking together when shredded.  It’s cheaper than “real food” so it’s becoming increasingly more common.  (In organic and natural foods, you’ll only find it in cheese.  Only the least processed version can be used in these, while there are many versions that can be used in conventional foods.)

Should you eat it? Depends.  It’s basically harmless, but it’s indigestible and may cause gas.  It’s probably better than a lot of chemical anti-caking agents, but not an ideal item to consume.  Where possible, skip foods containing it.  For example, buy blocks of cheese and shred them yourself (a food processor can do the job quickly).

What it is: Natural flavors derived from anything “natural” — plants, animals, herbs, etc.

Where it’s found: They are found in a lot of products, like ice creams, beverages, crackers, cookies, and nearly all premade items.

What it is: These are dough conditioners and emulsifiers.  They are also a form of trans fats.  They help to give texture to bread and other baked goods.  Often, they are made from soybeans.

Where it’s found: Ice cream, bread, peanut butter — anywhere that manufacturers want oil and water to emulsify instead of separate.

Should you eat it? Probably not.  There’s not a lot of solid research out there, but these aren’t natural fats.  These have been manipulated and are being used to make foods behave in an unnatural way (i.e. prevent the oil from separating in peanut butter) and are used to increase shelf life.  Depending on the source, they could contain allergens as well.

What it is: An emulsifier made from a type of red seaweed.

Where it’s found: Milk, flavored milk, and alternative milk, yogurt, and other foods to improve texture (makes it slightly thicker).

Should you eat it? Most sources say no.  Some studies have linked it to stomach problems.  It may exacerbate IBS, lead to leaky gut, or increase cancer risk.  A study links it to glucose intolerance and insulin resistance (and possibly the development of diabetes). With such a scary list of possible issues, carrageenan is best avoided.  (Source 1, 2, 3)

What it is: These are simply oils from the safflower or sunflower plants.

Where it’s found: These are used in “healthier” snacks, like veggie chips, potato chips, etc. (where corn/soy oils might be used in conventional snacks)

Should you eat it? These are certainly better than corn and soy because they’re not GMO.  Unfortunately, they’re both really high in polyunsaturated fat and omega-6s.  These are not oils you want to eat regularly.  On occasion, it’s okay.  (Omega-6s are actually important for health.  The issue is, we get far too many of them.  Just keep your consumption balanced with saturated fats and omega-3s.)

What it is: A starch usually made from corn, or occasionally potatoes, used as a filler or to create texture.

Should you eat it? Maybe.  Some say if it’s from a non-GMO source that it won’t hurt you in small quantities.  Others say it may contain gluten (depending on the source), it may cause abdominal pain, gas, bloating, or allergic reactions.  If you are allergic to corn or gluten you will want to avoid it.  Otherwise, a small amount here and there may not be an issue, unless you notice it is a problem for you specifically.

What it is: When soy oil is degummed, there is a sticky substance leftover, which is lecithin.  Lecithin, in general, is a necessary nutrient, actually (also found in egg yolks).  It’s used for emulsifying products.

Where it’s found: Often in any sort of chocolate, and now in bread, cakes, cookies, candy, etc.

Should you eat it? If you are allergic or sensitive to soy, no.  The type of lecithin that’s used commercially is mostly a waste product that can contain solvents and other undesirable additives.  It is added to chocolate not because it “requires” it but because it saves a lot of time in production (skips the “conching” process, or mixing that can take 2 – 3 days).  If you are not sensitive to soy, a tiny amount of soy or sunflower lecithin now and then is probably okay.  It’s harder and harder to avoid if you eat any pre-made products, though.

What it is: Celery juice is just juiced celery, usually dried.  It’s a natural source of nitrites.

Should you eat it? That depends on who you believe.  These meats are labeled “uncured” because they do not use chemical sodium nitrite or sodium nitrate to cure the meat.  Instead, they use the celery juice powder, which contains a natural source of nitrites.  The effect is the same — the meat is cured and it contains nitrites.  But it’s from a natural source.  Some say it causes cancer…some say no.  Some say you don’t need to avoid sodium nitrite in the first place, and others say you should avoid celery juice powder too.  Depends on your personal sensitivity to it.

What it is: It’s a natural yellow food coloring.  It’s made from the seeds of the achiote tree.

Where it’s found: In mac’n’cheese, regular cheeses, some other dairy products, or many other ‘yellow’ natural products.

Should you eat it? Depends.  A number of people are actually allergic to it and need to avoid it.  If you’re not, occasional consumption is fine.  If you have unexplained allergies, you might try avoiding it for awhile to see if it helps (but this goes for any food or food additive).

What it is: This is a chemical that’s used to make seafood appear firmer or fresher.

Should you eat it?  Probably not.  When it’s not used in food, it’s a fungicide and pesticide, and there is some evidence that it’s harmful to health, especially if inhaled. It’s also used in different types of cleaners.  When at all possible, avoid this.  (Source 1, 2)

Not all food additives are bad.  Some are.  The only three on here I would honestly recommend avoiding are mono- and diglycerides, sodium tripolyphosphate, and carrageenan.  The rest, it’s up to you.  A little here and there is probably okay unless you have a specific allergy or sensitivity.  A steady diet of foods containing these additives is probably not a good idea.

But now you know, so you can make an informed choice. 🙂

Do you worry about ingredients to avoid?  Why or why not?