Why We Have a Bullying Problem |
AD 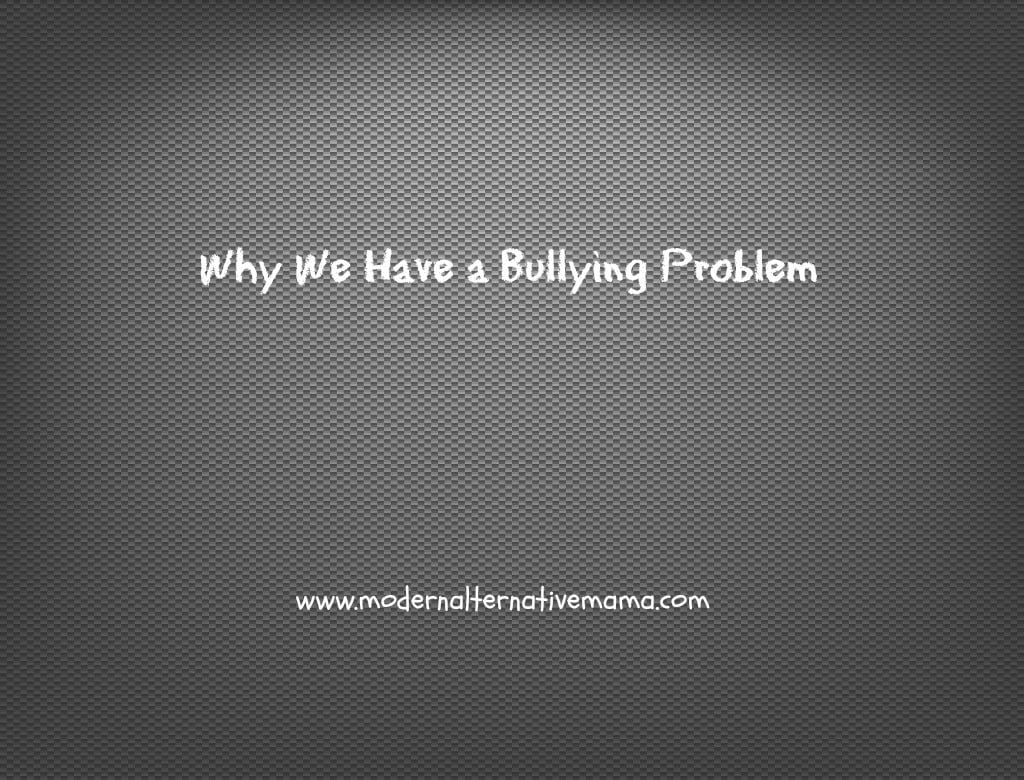 Why We Have a Bullying Problem

There’s been a lot of focus in the last several years (really, since Columbine in 1999) on bullying, mostly in schools.  Why is bullying so rampant?  How do we combat it?  Why does it seem to be getting worse?  What can we do to protect our children from it?

But the answer is obvious.

It is coming from the parents.

Yes…the parents.  Look no further than your average mom or dad.  Heck, look no further than your average online discussion!  Look how badly full grown adults behave when they think they can get away with it.  People are downright nasty to others who have different opinions than they do.  And when they’re angry, they often resort to name calling, insulting a person’s image/attractiveness/weight, belittling, and more.

When you’re rude to someone because they are different than you are, that’s bullying.  And maybe you don’t see it that way because adults don’t follow one person around for weeks, months, years on end, tormenting that one person in particular.  But adults don’t really have those same opportunities because they’re not in a setting that allows them access to one person for that long.  But in school…that’s exactly what kids have.

If someone cuts you off in traffic and you scream out the window and swear…that’s bullying.  Even if you yell and swear inside your car and the other person doesn’t hear, but your kids do…that’s bullying.  (They’re getting the message that when someone does something you don’t like, that’s how you handle it.)

If a service person makes a mistake, is slow to serve you, or otherwise annoys you and you are rude and snippy to them, that’s bullying.

If you’re watching TV and you’re making comments about how ugly a person is, or stupid a person is, or otherwise being judgmental, that’s bullying.  It doesn’t matter that they can’t hear you…your children are listening.

And when children see and hear these things, they think it is okay.  They think they can talk to their peers this way.  They don’t see a difference between judging strangers on TV and judging kids they go to school with.  They’ve gotten the message that certain things are wrong, weird, or bad — and they’ll be ready to point it out and make fun of kids who personify those traits.

But oh, come on.  It’s all innocent!  The “true” bullies are the ones who have serious psychological problems, whose parents abuse them, who are truly narcissistic.

That’s true sometimes.  But not really.  Most bullies, they say, actually have a lot of friends and very high self-esteem.  They aren’t damaged or abused.  They don’t bully because they’re screwed up.  They bully because they feel strong, proud, and righteous.  Which is why the “average” kid observing parents who bully can be dangerous.

But, all those adults saying those things…that’s not really bullying.  I mean, not really…

Sure it is.  Let’s take a recent case.  This week, Hoda and Kathie Lee on the TODAY show were discussing a blog post from Little Owl Crunchy Momma, Jacque.  The post was “Why I Haven’t Washed My Hair in Five Years.”  If you dive into it, you find that she rinses her hair a couple times a week and washes other body parts as necessary, but has found for her hair that additional care isn’t required.  (I personally couldn’t use only water because my hair tends to be more oily, but those with more ‘average’ or dry hair often find it works great.)

But they were rude.  “That can’t be safe.”  “That’s just gross.”  “Her hair has to smell.”  They didn’t discuss why someone might do this, or why it can work for some.  They made uneducated and incorrect assumptions, then judged them.  They sounded like high schoolers!  And where do we think high schoolers learn it…?

For professional “journalists” this was unacceptable and over the line.  Why is it okay for grown women to go on TV and make pithy, stupid comments about someone they don’t even know?

This story was later posted to Facebook (on the TODAY show’s wall) and thousands of more people started to insult and belittle her, calling her “gross,” “dirty,” and speculating about what else she doesn’t wash, how much she smells, and so on.

This is considered appropriate behavior (apparently) by adults on the internet.  It’s okay to talk like that to or about someone you’ve never met.  To judge them because they do things differently than you do, or they look different, or they have a different religion, or…

And we wonder where kids learn it?  They learn it at home.  From their parents.  Who may say that treating others this way isn’t okay, but kids do what you do, not what you say.

Jacque appeared on an episode of The Doctors, filmed on Friday, 1/17, to discuss her hair care methods in more depth. The air date is TBD.

All the anti-bullying training sessions in the world aren’t going to curb our bullying problem when we have adults who behave this way regularly.  We teach our youth through example.  If we say “Don’t bully” but we mistreat others regularly, our children will do the same.  They follow the example that’s been set.

The way to really curb bullying is for adults to grow up.  To realize that it’s important to treat each other with love and respect all the time.

I’ve seen people who are attempting to share their sincere belief in positive parenting, which includes treating children with respect and never shaming them, by…speaking disrespectfully to adults who disagree, and shaming them!  So, wait, you’re trying to tell us how great your parenting with respect is, by disrespecting adults?  I have a hard time believing they practice what they preach when they can’t afford other adults the same respect they purport to give their children.  This just does not make sense to me.

Not everyone’s going to agree with you — it’s okay.  Online, right after you’ve shared an opinion, someone’s going to share a dissenting opinion without mentioning you — they’re just sharing their thoughts, not doing it “at” you.  Even if they are, you have the right to offer a respectful response, or…ignore it!  Rude strangers don’t own you.

Let’s make a real effort to end bullying, by changing our own attitudes.  The world will be a better place with respectful people in it.

What do you think is causing the bullying problem?