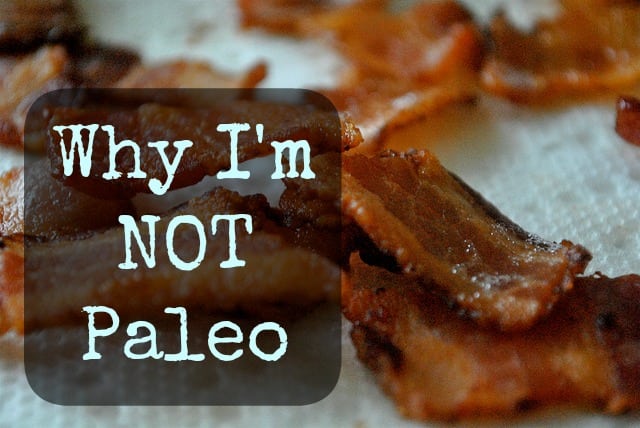 Why I’m NOT Paleo

Editor’s note: Contributing writer Angela Parker joins us to share her thoughts on the paleo diet. Angela Parker lives in Richmond, VA, with her husband and two daughters. She loves cooking and coming up with healthy recipes to share. She is active in her church and helps her husband lead their small group. She is head writer at www.GrassfedMama.com which focuses on having a healthy lifestyle and honoring God.

Why I’m Not Paleo: A Balanced Approach

Paleo Diets are all the rage right now.  The term Paleo comes from Paleolithic. The basis of these diets is to eat as a caveman would.

There are some things I love about Paleo

People are giving up their SAD (Standard American Diet) to go Paleolithic. These Paleo eaters are swapping fast food to eating clean foods and cooking at home.  This is wonderful for health benefits!

Crossfit is a workout program coming out of this Paleo movement encouraging women to be Strong and not Skinny. People are encouraged to lift weights, build core strength and take recovery days off. Paleo followers are not encouraged to run for long periods of time, taxing their adrenals, but to sprint and get their heart pumping.

Because of the basis for eating clean foods, there are lots of good Paleo cookbooks and recipes that are healthy and so tasty! Paleo recipes focus on quality meats, eating vegetables, grain-free baking and using high-quality coconut oil. This diet is by far better for us than the low-fat diet and low-calorie diets from the past.

There are some things I Don’t love about Paleo

I believe in the Bible. I believe that God created Adam and Eve as the first humans. No evolution from monkeys needed! Once Adam and Eve were kicked out of Eden, they continued to farm the land and kill livestock for foods. This is our earliest model of what God wanted us to eat. On a side note, I do believe in micro-evolution where there is evolution within a species to continue to survive but not across different species.

I’m not going to disagree that bacon is yummy. We eat bacon. We just make sure that we get nitrate free Turkey Bacon. We don’t eat pork on a consistent basis because there are some reasons God didn’t want the Israelites to eat pork (unclean!). Pork carries dangerous viruses that can be transferred to humans. Pigs also carry parasites in their meat.

Pigs by design are a garbage disposal. They don’t have sweat glands or other means of getting rid of toxins in their body – because they weren’t designed to be eaten.

Ummm this does not sounds like “eating clean” to me!

(Editor’s Note: While we are aware that many do not eat pork due to biblical beliefs, we believe that it is possible to eat clean pork. Pigs that are confined are fed toxic waste and those toxins are passed on to the consumer. However, pigs that are raised in a clean environment, unconfined, and pasture centered are clean and can be a great addition to a healthy, real food diet. As with all things, moderation is key!)

If you are a hunting/gathering culture, you are just going to eat whatever is in your region. You will eat starches like potatoes if they are growing near you, even though this is not on the Paleo diet. There are plenty of documented traditional cultures who were healthy and thriving who were not eating Paleo diets as seen by the research of Westin A. Price foundation.

Commercial dairy is an inflammatory food. Many people do carry some form of intolerance because they stopped producing the enzymes to fully break down the proteins in dairy.

However, we shouldn’t throw the baby out with the bathwater!  Eating grassfed butter, natural cheese and yogurt full of probiotics can be a wonderful part of a healthy diet. Raw milk and cheese are considered a super food and most people even with dairy intolerance are able to eat these without issues. Goat’s milk is another type of milk that is easier to digest than cows milk. Cultured dairy, like yogurt and kefir, is a great source of probiotics which is helpful for your digestive health and immune system.

5) No Grains or Legumes

A diet mostly made of grains is not healthy, cue the Food Pyramid. Grains and beans are high in phytates which can deplete the body of valuable minerals like magnesium. However, we don’t have to give grains up because of this. These phytates can be reduced through a process of soaking to break down the phytates before cooking. Our family enjoys oatmeal, sourdough bread, and beans after we have soaked or fermented the grains to reduce these phytates.

So what am I eating?

I am eating a very balanced approach right now by  Trim Healthy Mama. I don’t think this is the ONLY way to eat, but it is working for me and my family.

It is balanced because it does accept all food groups (even bread!). I like to follow a diet where you can eat carbs for energy and also fats for satisfying meals (Trim Healthy Mama encourages them to be separate for weight loss). If you don’t need to lose weight, then you can mix the two sources of fuel (fats and carbs).

I eat a protein source at every meal and snack to keep my blood sugar stable. For example, I’ll make a chocolate muffin in a mug and top it with Stevia sweetened Greek yogurt as my protein source. It gives me good energy and satisfies my desire for sweets without messing up my blood sugar.

There are still a lot of recipes that would be considered “Paleo” that I use. I will use grain-free flours such as almond and coconut flour for making satisfying desserts and bread. I will use low carb vegetables, like zucchini and Brussels sprouts with lots of coconut oil for dinners.

But I can also enjoy a nice warm bowl of energizing oatmeal in the mornings, which is not considered Paleo.

To Sum it Up

My recommendations would be to find a lifestyle where you incorporate more whole foods and vegetables into your diet over processed foods even if that is Paleo. Stop eating the Standard American Diet. Allow for balance in your food choices and choose healthy foods that will keep your blood sugar stable.

Have you heard of the paleo diet? What are your thoughts on this diet?