Just Breathe: Why Studying to Become a Doula has Made Me a Better Mother |
AD 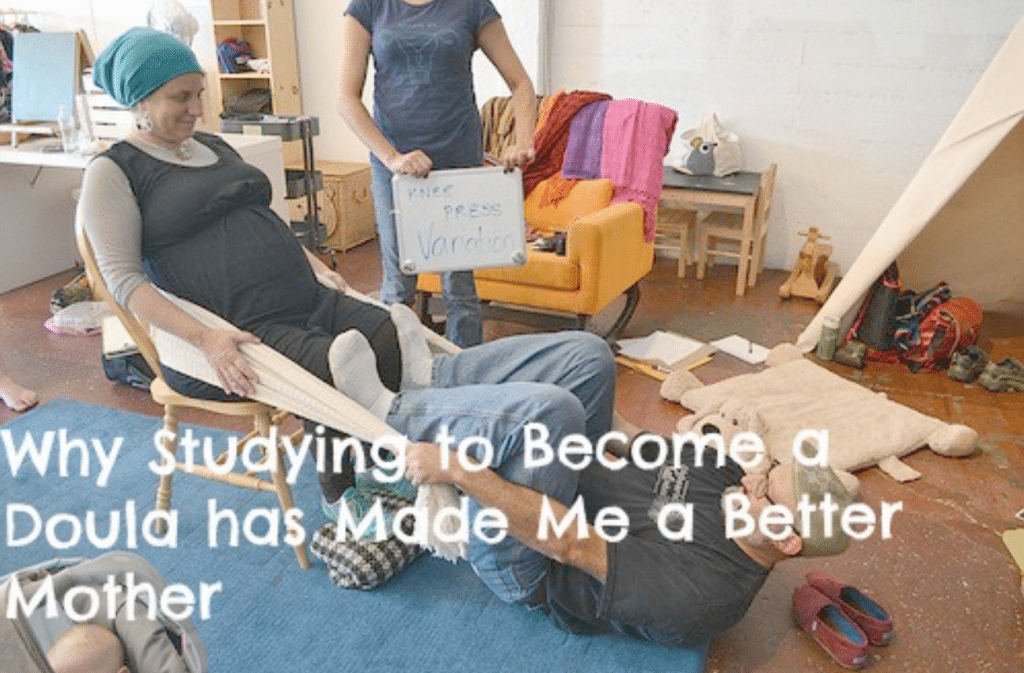 Just Breathe: Why Studying to Become a Doula has Made Me a Better Mother

Editor’s Note: This post is by Kristen Hurst, a writer, a mother, a yogi and a doula. She received her bachelor’s degree in fashion marketing, and now blogs for Seraphine Maternity. When she’s not trying to juggle the lives of Casey, Austin, and Ben, she enjoys painting and catching up with a novel.

I didn’t know what a doula was until I became pregnant for the third time. I was desperately trying to re-frame my perspectives on birth and mothering and recently found the dominant attitudes on these subjects harmful to my family’s well-being.  Generally, I was far more concerned with how I appeared to be as a mother than how my kids were doing.

No maternity clothing could change the fact that I was losing sleep over this.  Upon meeting a doula, R, in one of my prenatal yoga classes, I realized that the work she did transcended being present at another woman’s birth—it affected her presence on the mat and within our budding friendship.

My friendship with R certainly taught me what a doula does and why my husband would have benefited from one as much as I would have. I didn’t decide to pursue doula training until my sister became pregnant. Eager to have me by her side, I wanted to honor her by coming into the situation informed, or at least more informed than I was when I begged for an epidural. While I hardly floated around with an enlightened glow after my doula training, it helped me to serve my sister and to become a better mother.

What does a Doula Do?

The goal of the doula is to make sure the mother feels confident and safe through all stages of her pregnancy, including after delivery. We do this by providing physical and emotional support, which includes everything from acupressure, massage, or simply listening and responding to the mother’s needs. In a sense, doulas mother new mothers so that their families can focus on their own feelings during the birth process.

The goal of the mother is to raise children that feel confident and safe as they start lives outside of the comfort of our nests. We do this by providing support, too—financial, emotional, and physical— to varying degrees depending on our means. Just as the job of the doula isn’t to live vicariously through your birth experience, taking on all of your emotions, the job of the mother isn’t to live vicariously through her children. As soon as I started respecting my children’s individuality, it became easier to deal with both of our positive and negative emotions.

Many Ways to Give Birth

The bulk of doula training deals with becoming familiar with everything that could possibly happen during a birth. This isn’t as simple as what to do if your baby is breech—the baby and mother are much more nuanced than the vaginal vs. c-section debate suggests. When I gave birth, I didn’t know that there were many positions in which I could push. Or that some would have led to more pleasant memories than what I remember of starving and screaming in a hospital bed. Anyway, it’s easier to be supportive when you’re informed about what’s going on, even if every birth is different.

Allowing my children to thrive is also related to offering support. Doulas offer whatever kind of support is necessary at the moment and serve as a liaison between the midwife or medical staff and the family. This means that sometimes you’re placed in the role of brewing tea and rubbing feet, and other times you’re convincing the mother that yes, standing up will lessen the strain she’s currently feeling, not make it worse.

Don’t get me wrong, I trust the woman’s body first, but sometimes supporting the mother means being willing to tell her things she may not want to hear and delivering the news in a way that honors her humanity.

Before I became a doula, my parenting was informed by a lot of the textbook advice and human emotions. I hate to admit this, but I wanted my kids to be “good” so they wouldn’t embarrass me. Supporting them meant making their problems disappear, or at least disappear from my view.

My doula training taught me that in order to support my kids, I needed to listen to how they were feeling. I needed to trust them and my knowledge of parenting, and to make use of all of the tools I had at hand including meditation, prayer, long walks, and what worked on their brother.

I’m aware that my doula training helped me better understand mothering, better respect the individuality of my children, and better support them even when what they were feeling made me feel uncomfortable. I’m certain that it affected me in ways I can’t possibly see too. I’ve only attended a couple of births since I held my sister’s hand as she gave birth to my niece, but each one gives me a new window into the best way to doula my children as they birth who they are about to become.

What role have you played professionally that has impacted your role as a parent?