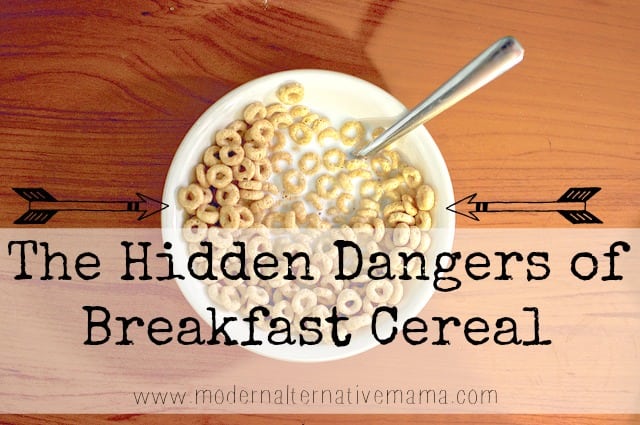 The Hidden Dangers of Breakfast Cereal (& The Breakfast Revolution You Need)

The marketing behind the breakfast cereal industry is massive. Grocery stores devote entire aisles to boxes upon boxes of endless varieties, most promoting some sort of health claim. “Heart-Healthy!” declare some. “Excellent source of fiber!” claims others.

Pretty well all of them contain undesirable ingredients to some degree, but many of them are surprisingly (or not so surprisingly perhaps) just downright awful. I find it amazing that companies have successfully marketed boxes of highly processed grains drenched in sugar, artificial coloring, and preservatives as a healthy breakfast option. Those things don’t provide a healthy start to the day at all.

The Weston A. Price foundation has an excellent article on the dangers of the modern food processing industry. In it, they describe the process whereby breakfast cereals are created into little flakes and shapes. It’s called extrusion, and it’s not as harmless as the cereal industry would have us believe.

The article goes on to describe an unpublished experiment found in a file cabinet from the 1940’s.

“…four sets of rats were given special diets. One group received plain whole wheat grains, water and synthetic vitamins and minerals. A second group received puffed wheat (an extruded cereal), water and the same nutrient solution. A third set was given water and white sugar. A fourth set was given nothing but water and synthetic nutrients. The rats that received the whole wheat lived over a year on this diet. The rats that got nothing but water and vitamins lived about two months. The animals on a white sugar and water diet lived about a month. The study showed that the rats given the vitamins, water and all the puffed wheat they wanted died within two weeks—even before the rats that got no food at all. These results suggest that there was something very toxic in the puffed wheat itself!”

It can be tough for a parent to figure out healthy choices when they’re being manipulated at every turn by the deceptive and misleading marketing. Parents don’t always have 15 minutes to stand in the cereal aisle, deciphering ingredients and nutritional information.

The truth is, they pack a LOT of sugar into those boxes, probably for two reasons:

1) It’s cheaper than making it taste good in natural ways (healthy fats, natural sweeteners, etc).
2) To hook people on their product (effective, since our culture nurses a major sugar addiction).

Frugally-minded folks also don’t necessarily want to pay three times the price for the less-terrible options in the organic food aisle (those ones are better, but usually not perfect. They often use undesirable oils, like soy or vegetable oil. Plus – they’re still extruded grains!).

So what’s a naturally-minded mama to do?

It’s time for a breakfast revolution. One of the first things I did when I first began my natural living, real/whole food journey was to stop buying boxed breakfast cereal. We gleefully dove into the world of bacon and eggs, homemade pancakes, and oatmeal with lots of cream and real maple syrup. These things are good for us?! Yes! And not only that, but they sustain your hunger for longer and taste way better. We were hooked.

It has now been well over five years since I began that journey, and I’ve tried more pancake recipes than I could possibly count. I’ve attempted every sort of eggs, a bajillion oatmeal varieties and recipes, and gone outside the box with oodles of crazy breakfast food ideas. I also finally settled on my absolute favorite granola recipe that I keep on hand for when I want to dump something in a bowl with milk for the sake of speed and convenience (we all have those days, right?).

I honestly can hardly believe the difference it made in my life. When I was eating processed breakfast cereal every day I was constantly hungry shortly after eating it. It was like eating cardboard. (Ahem – perhaps it pretty much was cardboard?!)

These days, breakfast serves to nourish and satiate my body. I have figured out a few tricks for still having real foods on hand to serve on “those days”, and I’ve fine-tuned my very best recipes to tuck under my belt as old standards. These are my day-in-day-out sort of recipes, and our family loves them.

After being asked many times for several of the recipes by friends and family, I decided to write a cookbook so that I could offer them to the world. I want the whole world to join the breakfast revolution, but I’ll settle for one at a time. It starts in your own kitchen. Wanna join me? You can buy a copy of my book to have delicious, easy, tested recipes on hand for the journey.

Bonus! I’m offering a coupon code just for MAM readers! Use “MAMREVOLUTION” to receive 20% off the retail price, valid until November 30, 2013. Join the revolution!

What meal of the day is the most challenging for you?