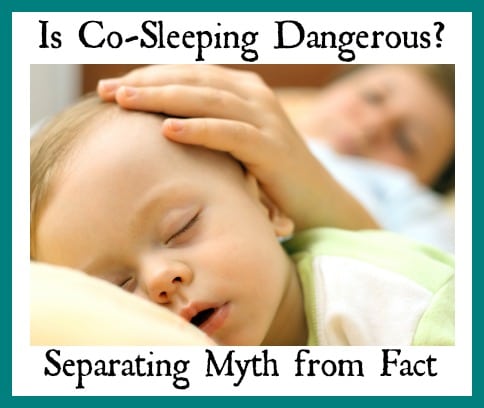 Today we have a guest post from Trisha of Intoxicated on Life.  She’s addressing the recent PSAs stating the co-sleeping is dangerous, and the study that “proves” it.  Read on to separate fact from fiction!

I saw a recent PSA showing the dangers of co-sleeping. A mother lay asleep on a couch, playfully awakened by her husband who is behind a home video camera. She is cradling her infant daughter in her arms. Suddenly alarmed, she screams, “She’s not breathing!” and the man drops the camera to the floor in a panic. The screen goes black, leaving the audience with ominous and predictable warnings: Never sleep with your baby, not even for a moment, because a moment is all it takes.

Co-sleeping advocates will probably never come up with a PSA nearly as effective as this. Nothing quite beats the your-children-might-die fear factor. Still, the question remains: Is this fear based on facts?

I was recently accused of disseminating “dangerous” and “unsafe” information in a post on my site titled 9 Benefits of the Breastfeeding and Co-Sleeping Relationship. The commenter referred to a recent study. This meta-analysis in the British Journal of Medicine sounded the alarm against bed-sharing.

“Bed sharing for sleep when the parents do not smoke or take alcohol or drugs increases the risk of SIDS…A substantial reduction of SIDS rates could be achieved if parents avoided bed sharing.”

This study analyzed the results from five SIDS (Sudden Infant Death Syndrome) studies conducted between 1987 and 2003 to come to these alarming conclusions. The researchers in this study are so convinced of the dangerous nature of bed-sharing that they conclude that nearly 88% of SIDS cases that occurred while baby was bed-sharing could have been avoided had the babies had their own bed.

Wow. If you’re a breastfeeding, baby-wearing, co-sleeping mama like me you might be a bit alarmed by this statement. I had always understood the data to support co-sleeping when parents were non-smokers and sober, to actually be advantageous to baby.

I started to wonder: despite the fact that I love cuddling with my babies all night long, would I forgo bed-sharing if I were to have another baby?

A Closer Look at the Facts

One thing I’ve learned in my years of schooling and research is that you can’t take the conclusions of every study at face value. Some studies are well-designed and some are, well…not. So, I dug into this study more to find out what was really going on.

There was nothing standardized about this analysis. It is wrought with problems and inconsistencies. This was most definitely not a well-designed meta-analysis. In my opinion, using this study you cannot claim co-sleeping is a dangerous practice and increases rates of SIDS.

So, Can You Safely Co-Sleep?

I believe the answer to this question is definitively, yes. In addition to anthropological evidence, there have been many studies which have shown that when you safely co-sleep with your baby it decreases the risk of SIDS. Indeed, in Japan co-sleeping is the norm, yet they also have one of the lowest rates of SIDS in the world.

If you choose to co-sleep, be sure to know the guidelines on how to safely co-sleep.

Just as there can be hazards associated with your baby sleeping in a crib, so too there can be dangers in co-sleeping. As a mother, it’s your duty to make sure you are giving your baby as safe of a sleeping environment as you are able.

Co-sleeping…with an actively breastfeeding mother saves lives, is a powerful reason why the simplistic, scientifically inaccurate and misleading statement ‘never sleep with your baby‘ needs to be rescinded, wherever and whenever it is published. – Pediatric Respiratory Review

Trisha is a Christian homeschooling mom to four boys. She is married to Luke, her best friend. She blogs with Luke at Intoxicated on Life about their families’ pursuit of a healthy home life: physically, spiritually, and emotionally. They aim to present solid research fused with timeless wisdom and personal experiences. Trisha also writes at BreastfeedingPlace.com, a site that aims to encourage and support breastfeeding moms. You can find Luke and Trisha at their blog, as well as on facebook, twitter, Pinterest, Google+