Monday Health & Wellness: Is Salt Good For You? (And A Tour of the Salt Mines!) |
AD 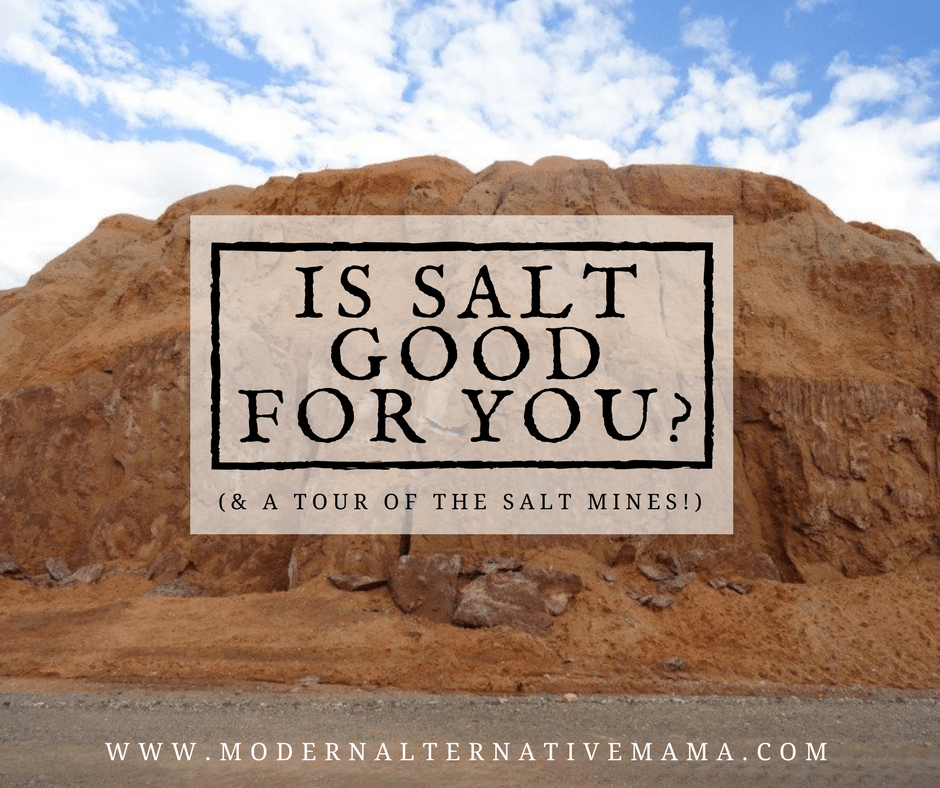 Monday Health & Wellness: Is Salt Good For You? (And A Tour of the Salt Mines!)

Many of us have heard time and time again — don’t eat too much salt, it’s bad for you!

The thing is, the salt most of us are used to is the processed, refined salt with a lot of added ingredients in it.  The salt is bleached, deodorized, and has anti-caking agents added to it.  This salt is 99.8% pure sodium chloride.

Research on whether a low-salt diet is healthy is still controversial, but reducing salt intake does show a modest decrease in blood pressure.  We do need some salt, though — it helps regulate our muscles and nerves, as well as the balance of fluids in the body.  If you’re dehydrated, you need some salt to help you hold onto that water!

Salt can be very beneficial, though.  One study shows bathing in salt high in magnesium (yes, that’s a salt) improves skin smoothness and reduces redness.

Another time I’ll dive into the controversy about salt a bit more.  Today, though, I want to showcase how one company makes its salt: Real Salt.

I first heard about Real Salt from a friend a few years ago.  I thought, okay, sure…good salt.  Whatever.  It can’t be that different than the big cans of “sea salt” sold (much cheaper) next to it in the store, and certainly not different than the pink himalayan salt I was starting to use.

By taste alone it’s clearly different.  It doesn’t taste as salty, if that makes sense.  It is even noticeably different than other good salts.  It was also granulated, more like ‘normal’ salt, and we preferred that.  I began to use Real Salt almost exclusively.

Then a couple months ago, I was invited on a retreat with the wonderful people over at Real Salt.  As part of the retreat, I would get to visit the salt mines, and ask them a whole bunch of questions.  I accepted, I went, and I got to pick their brains and take pictures for all of you.

First of all, it was a gorgeous day.  And that smoke you see in the background?  Well…we were shooting dynamite with some shot guns, for fun. 🙂  Don’t worry, we had an expert showing us what to do and lots of safety equipment.

Just look at those mountains….

Before we got to the salt mines, we passed by the clay mines.  They mine bentonite clay, too.  That gray stuff on the top of the pile, that’s the clay.

Here’s the outside of the salt mines.  This is the industrial grade salt.

Now we’re entering the mine!  I snapped the picture from a moving truck (don’t worry, I wasn’t driving), so it’s not so great.

At this point, everything is salt.  Literally.  The ground, the walls, the ceiling.  Everything.  We are driven back and down a ways, until we get to a current mine area, where they are mining the food-grade salt.  This is Real Salt!

That’s a pile of Real Salt.  There are walls of it too.

What they do is bring in a machine that scrapes the walls.  It gets the salt off, which goes into a special truck in chunks.  The truck takes it out and it goes to a plant, where they sift it and then crush it to the appropriate size, and package it to sell.  That’s it!  They don’t do anything else to the salt.

I’m standing on the salt!

I got to bring home some salt rocks as souvenirs.  I chose one large one and three small ones.  Each of the kids got their own.  They all came from this pile.

Here’s the large rock I got to take home.

You can see the pink color even better when you shine a light through it.  Here’s our guide, doing exactly that.

I asked if they have ever found salt lower than 92% sodium chloride.  The guy giving the tour (a miner with 20+ years of experience) said the lowest they have found is 86%, but they don’t actually mine anything lower than 92%.  They keep a lot of the lower grade salt as walls and ceilings.

So far, they have three levels of the mine, and are about to start on a fourth.  The mine only goes down about 500 feet from the surface.  The salt goes down a few thousand feet.  They’ve been mining for about 60 years and have yet to get 10% of the available salt, so they’ll be able to produce Real Salt for hundreds of years yet!  (If you’re curious, the town of Redmond, Utah, is a little over 5000 feet above sea level, so they really can go down quite a bit further.)

Here’s a picture of our tour group in the mine!  Ben, Nathan, and I are on the far right.

Here’s another gorgeous picture of the salt rocks on our way out.

They make about 15,000 tons of Real Salt each year.  They mine 24/7.  Yet, this is only a small fraction of the salt they actually pull out of the mine.  Most of it is for industrial use.

That is how Real Salt is made!  Very simple, really — minimal processing.  They don’t actually do anything to the salt besides remove it from the mine, sift it, and grind it.

These days, I only buy Real Salt.  I love the product, but I am also impressed with the way the company does business.  They truly care about their employees and in fact, everyone they do business with.  They don’t just say it.  Values like honesty, integrity, are not just buzzwords to them.  They walk the talk.  And it is obvious when you meet their employees because every one of them is excited and motivated and loves their job.  That’s why I’m sharing this with you — they got me excited, too!

This post is in no way sponsored.  Yes, they invited me on their leadership retreat, but I wasn’t paid to write this.

That was my trip to the salt mines!

Do you use healthy sea salt?  Or are you still wary of salt?