To My Sons: How to Be Great Men in a Messed Up World |
AD 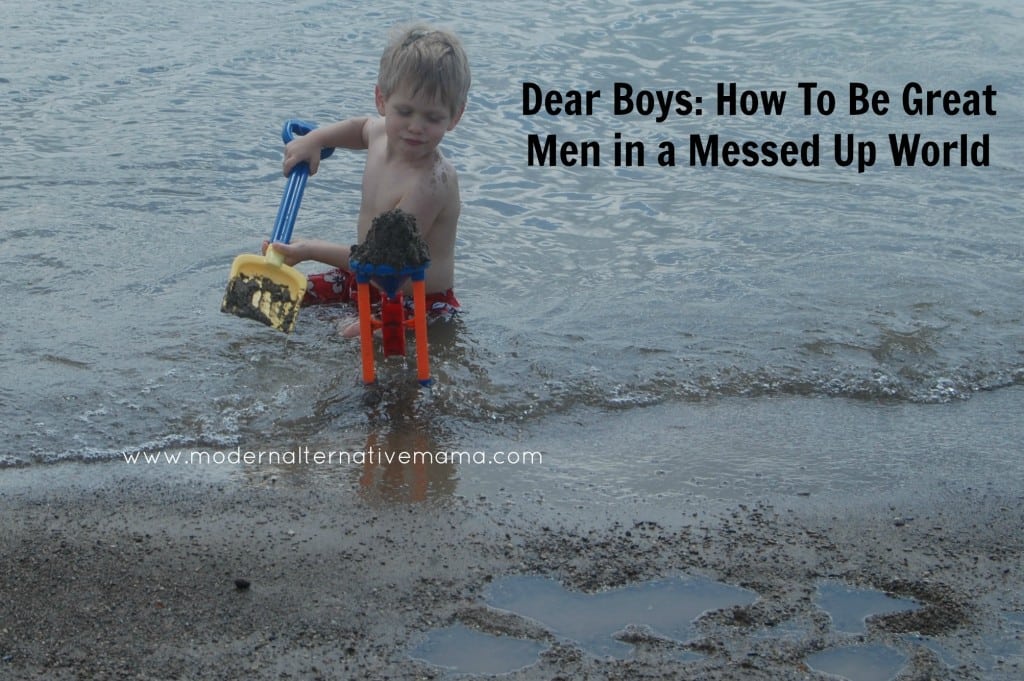 To My Sons: How to Be Great Men in a Messed Up World

There have been a rash of blog posts addressing both boys and girls — mostly girls — since Miley Cyrus’ now infamous twerking at the recent music awards.  I know as little about that as possible (didn’t watch the video, don’t really know what twerking is).  But the instructions to boys and girls and the point about how we’re busy telling little girls not to be immodest while we leave the boys alone struck a cord.

I have three boys.  I have a daughter, too, but she’s so feisty I don’t worry much about her. 🙂  And as independent as she is, she understands modesty.  It’s kind of the perfect combination, really — an independent spirit who will be unlikely to follow the crowd or be taken advantage of but a modest heart.  The boys, though…they’re younger, they’re less independent (in a way) and there are so many messed up messages aimed at boys today.

I have avoided this issue up until now but I have to say something. I hope to actually be able to share this letter with my sons someday when they are older.

Every few months, some celebrity is chastised for immodest conduct.  What prompted this particular letter was a young woman dancing inappropriately while dressed immodestly on stage during a music awards show.  But really, the details don’t matter.

Boys, when this happens, girls are admonished to be more modest.  They’re told that they must dress appropriately, and they must not act like that.  I agree — it’s inappropriate.  But the biggest reason given by many for why they must do this, is because they might ‘tempt’ you into looking at them and thinking inappropriate thoughts.

I love you boys.  And you are all so smart.  You know right from wrong as well as your sister or any girl.  And you should know that if you see a woman dressed or acting inappropriately that you ought to look away.  Or, depending on the situation, maybe she needs some help.  Maybe it’s a cry for attention.  Don’t give in to the temptation to take this behavior as a sexual come-on.  What she needs is a friend, someone who loves her, for her.  Choose carefully whether you should walk away or be her friend.  But don’t tread into those waters.  Don’t get romantically involved with her, at least not for all the wrong reasons.

It’s hard.  Society is going to tell you that you’ve hit the jackpot when you meet women who are ‘easy,’ as they call it.  They mean women who will have sex with you soon after you meet.  You, as men, will be expected to believe and act the same way.  You will be expected to want to sleep with lots of women and to brag about your prowess.  Don’t give in to this.  There’s nothing to brag about in sleeping around, not for men or women.

Unfortunately, you’ll see a lot of double standards.  You’ll see that women are blamed for dressing inappropriately and that men who lust after them are excused.  But in our home, that behavior from you will never be excused.  You are to treat women with all the love and respect that you treat our family and anyone else you come across, no matter what they are wearing or how they are behaving.  That’s what we’re called to.

Sadly, though, you’ll see another double standard.  When young girls are taken advantage of by older men, it’s called perversion, and it is.  But when young boys are taken advantage of by older women, they’re called “lucky.”  I hope you never have to face a situation like this.  I hope an older woman — or any woman — never makes you feel uncomfortable.  You don’t have to give in, you don’t have to do something sexual, and you are not less of a man because you say no.  In fact, a real man can stand up and say “I’m not ready.”  And I hope if you ever felt that someone was hurting you, that you would tell us so that we could help you.

The whole culture surrounding sex and love and respect is pretty messed up.  It makes me sad for the world. Here’s what it should look like, boys.  You’ll have plenty of friends who are both boys and girls, and you should.  Someday you’ll be grown, and you’ll be looking for a wife.  I hope that you find a woman who is lovely and who shares the same values you do, who is willing to wait with you until you are both ready for the relationship to move forward.  I hope that you come to understand that sex, within marriage, is a beautiful thing.  Sex, as a sport, is cheap and lonely.

I believe that you can be just as strong as any woman, in ‘avoiding temptation.’  And this cultural nonsense about how boys just can’t help themselves?  Sure you can.  You may look at a woman and feel lust (and we’ve all had private thoughts like this), but you are capable of saying no.  You are capable of avoiding any action.  You are capable of having respect for her, and for yourself.

If you slip up and give in to temptation, I won’t love you less.  If you do it in a way that hurts another, I will be angry, but I will still love you.  Sex, love, and marriage are thorny issues, boys.  And you may make mistakes, and you may get hurt.  I pray that you don’t, and it’s possible not to — your father never dated anyone but me.  I did date others and I can tell you that it’s not worth it, not until you’re ready to say “I do,” should you find the right person.

Real men know how to control themselves, how to rule in their homes peacefully, how to show the utmost love and respect to others.  They know how to treat women well, and they expect women to treat them well, too.  Don’t ever hurt a woman, but don’t let a woman hurt you either.  You can stand up for yourself respectfully, and you can walk away. I wish I didn’t have to tell you any of this.

I wish it were uncomplicated.  I wish you would not become aware of the mixed up and rather awful messages that the world is sending you.  I hope you know that if you ever feel confused or upset by anything you think, or see, or hear, that you will come to us and ask.  I hope you know that nothing will shock us, nothing will make us love you less.  We’re here to help you sort things out and walk through this world.

I love you, boys.  I know you’ll grow up to be great men.

Do you ever fear for your boys?