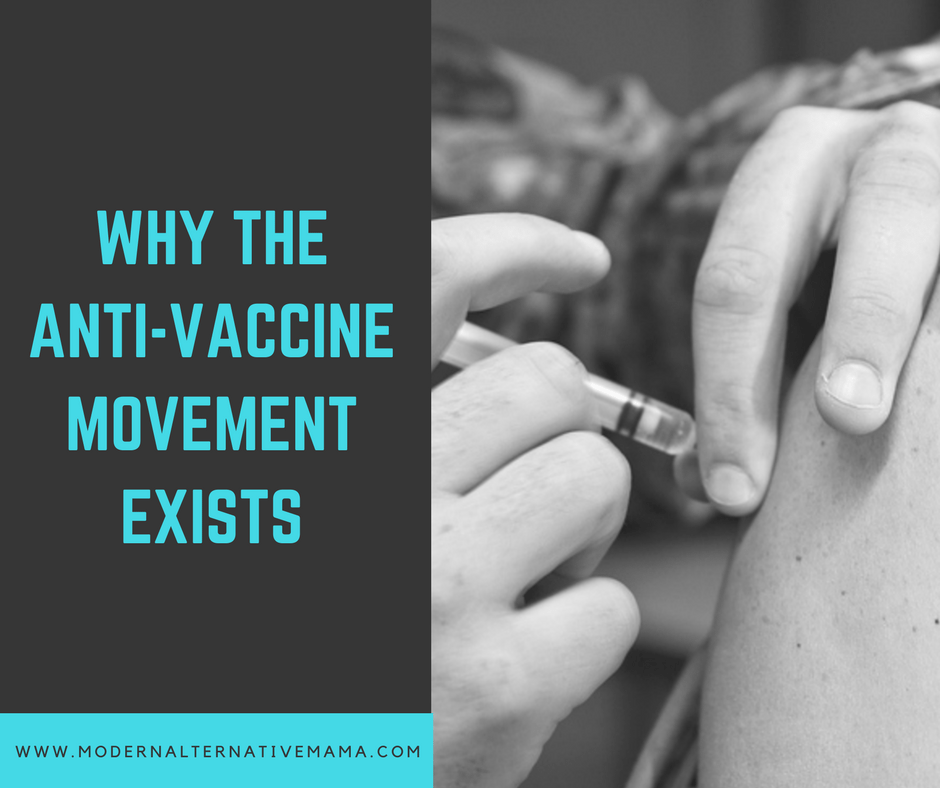 You should know right up front that this isn’t a research-based post.  I’m not trying to sway anyone to believe anything in particular about vaccines.  What I’m trying to do is explain to those who believe strongly in vaccines why there is an anti-vaccine movement in the first place.  It’s often believed that only crackpots and nutjobs who are anti-science could possibly refuse to vaccinate, or even look at a delayed/alternative schedule.  This assumption pretty much destroys any attempt at rational conversation.

I want to encourage rational conversation on this very important issue.  It is not one-sided, as the media has led us to believe.  There are strong reasons why this movement exists.

If you are pro-vaccine, please read this with an open mind.  I don’t expect that you will believe any differently after reading it, but I hope you will have more understanding and compassion for those who have made a different choice than you have.

Let’s talk about this notion that there is an “anti-vaccine” crowd.  This implies that the people who identify with this movement are actively against vaccines in general, and do not want vaccines to be used or available.  The vast majority of people in the so-called anti-vaccine crowd actually believe that people should have a choice on whether or not they want to accept vaccines, and which ones they want to get.  They do not believe in forcing people to vaccinate, nor in preventing them from doing so.

Additionally, a lot of people in the “anti-vaccine” crowd are actually somewhat or even very pro-vaccine, but they question the number of shots, the timing of shots, or the necessity of certain vaccines.  Some of these people will actually get most or all vaccines, on a delayed schedule.  Some actually speak out and say they think vaccines are important, but they have a few safety concerns.  These days, anyone who does not accept the full CDC schedule without question is labeled “anti-vaccine.”

Labeling the entire group of people — from the extremists who do want vaccines completely gone, to those who have minor questions but get most vaccines — as “anti-vaccine” really muddies the conversational waters.  We need to acknowledge that there is a very wide range of people out there, with a wide range of opinions and needs.  We can’t say “You’re for us or you’re against us, and if you don’t accept the status quo without question, you’re against us.”

It’s really important to understand those two points — people have a wide range of opinions, and most of them aren’t actually against vaccines (except, possibly, for their own families).

Why Are People “Anti-Vaccine?”

The popular media thinks that people are against vaccines for a few reasons:

I asked a bunch of people their reasons for not vaccinating.  Not a single one of them said any of those reasons above.  Not one person.  Nobody makes a serious medical decision (yes, it is a medical decision) based on what’s cool.  Do you choose whether or not to give antibiotics or if your child needs surgery based on what’s cool?  Or do you research, get opinions from multiple doctors (if it’s serious) and make a careful decision that’s right for your family?

It’s pretty insulting to assume that parents make the decision not to vaccinate for the reasons above.  Parents feel angry and misunderstood when others say these things.  Let’s look at some of the real reasons parents don’t vaccinate.

Most research shows that parents who don’t vaccinate tend to be educated, upper-middle-class white parents.  This puzzles researchers.  It shouldn’t.  People who don’t vaccinate are likely to have done quite a lot of research and if you ask, can probably cite dozens of published studies to support their opinion.  They are just rarely asked because so many assume they are stupid.

Remember that everyone just wants what is best for their families and that they love their children more than anything.  No one would do anything that they felt would cause or allow harm to their child.

What Makes a Source Credible?

During the vaccine discussion, most people go in assuming the other side is uneducated and they throw around words like “quack,” “woo,” “sheeple,” and so on.  This shuts down the discussion.

It’s really a mistake to assume that just because someone has made a particular decision — on either side — that they haven’t done any research and don’t know anything.  But it’s done all the time.

The next step is then sharing mountains of evidence, while the “other side” criticizes that evidence.  “The study was poorly designed, that researcher has financial ties/is an idiot/etc.”  This is sometimes true but the heart of the issue is that everyone has made up their minds and will not accept evidence that goes against it.

This phenomenon is so exaggerated that I have seen people praise people like Amanda Peet (an actress who is pro-vaccine) as a ‘good’ source of information, while they refuse to believe a word that someone like Dr. Mercola, Dr. Stephanie Cave, or Dr. Sears have to say.  I’m no expert…but I’m pretty sure anyone with a medical degree has probably done more research than an actress, especially if they’re writing books on the subject.  If Jenny McCarthy doesn’t count, then neither does Amanda Peet.

(Not that I think you should take any one person’s word for it.  I’m just pointing out a silly inconsistency.)

Why The Anti-Vaccine Movement Exists

There is such a strong resistance to anything perceived as ‘anti-vaccine’ right now.  It’s being shut down as foolishness.  “Vaccines are safe and the greatest gift of modern medicine, end of story,” is how it goes.

This isn’t being done in the mainstream.  People are being encouraged, there, to shut up, stop asking questions, and “Do what your doctor says because he went to medical school and you didn’t.”  In an age where people do have access to good information and many have been to college and know how to research and read scholarly publications, we should be encouraging them to research, not blindly follow!  This is sad.

(In another post I’ll be sharing a medical student’s answers to what his vaccine training was like.  Hint: not much.  That being the case, it is extra important for parents to be informed!)

So that’s why the “anti-vaccine” movement is really out there.  They’re informed, educated, passionate people who want you to know there’s another side to the story and get all the information you need to make the decision that is right for you.

Are you part of the “anti-vaccine” movement?  Did you know this information?