Why Real Maple Syrup Is Worth It |
AD 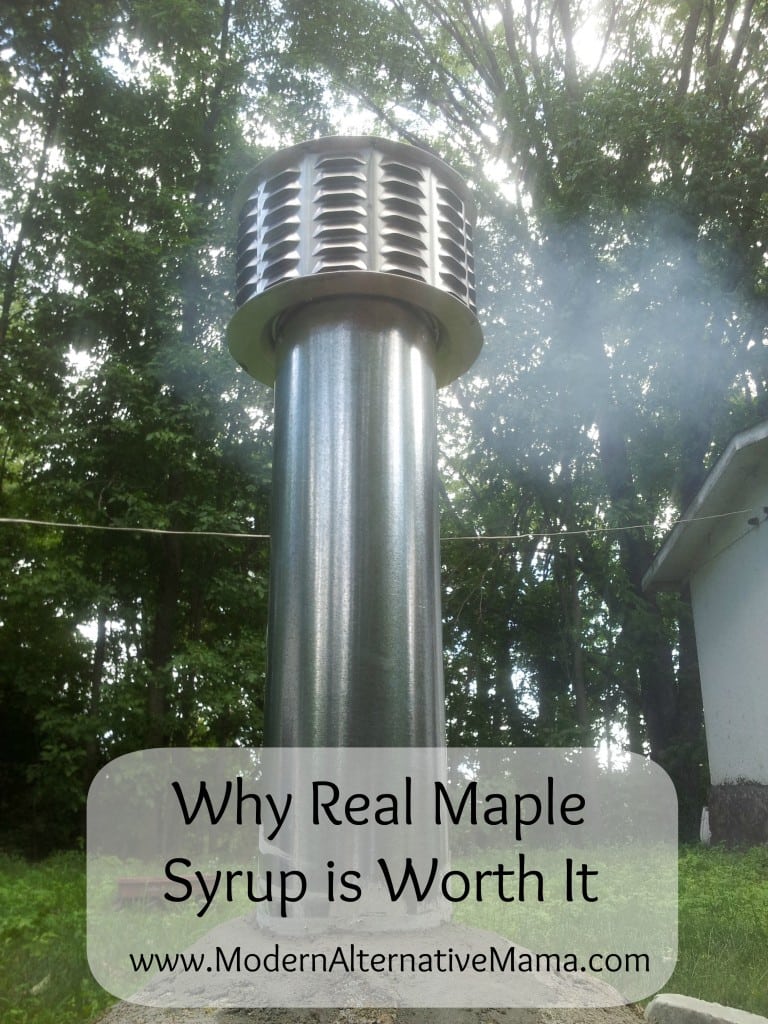 Why Real Maple Syrup Is Worth It

In the Real Food world, we’re used to paying a little more for elements of our food.  We often pay a higher price for pastured eggs and chickens, grassfed beef, and uncured pork because it’s more expensive to produce these nutrient dense foods.  But have you ever wondered why there’s such a difference in the cost of real maple syrup versus the other stuff in the plastic bottle in the grocery aisle?

I talked a little about the nutritional value of maple syrup at Modern Alternative Kitchen last week.  This week I’m going to talk about the history and process of making real maple syrup and why it’s worth the cost.

My grandfather sugared his property 20 years ago, and I have memories of riding on the back of the trailer and collecting syrup.  He had a wood stove he built outside that he used as an evaporator and I think there are still a couple jars of maple syrup in the crawl space.

A month or so ago my husband suggested that this spring we should try tapping the old maples on the hill ourselves.  Since then we’ve spent our time researching the process, digging out my grandpa’s old equipment, and fixing up the wood burning stove.  And chopping wood.  Lots of wood.

No one is sure exactly who discovered that maple sap can be boiled down into syrup.  There are some Native American legends and folk stories detailing the discovery of syrup.  In one story a man sticks his hatchet into a tree.  The next day his wife found a block of ice, or sap from the tree, at the base which she took home to make soup.  She cooked it all day and when they ate the soup, it was sweet.

We don’t know for sure how it was discovered, but we do know Native Americans used syrup and maple sugar for trading.  Thomas Jefferson even marveled at the maple and transplanted maples to his home in Virginia, only to find out that the temperature there wasn’t conducive to the collection of sap.

From Tree to Table

If you haven’t figured it out already, maple syrup is made from the sap of maple trees.  Sap can only be gathered in specific climates during a specific time of year.  When the temperature dips below freezing at night and climbs into the mid-40s during the day, the sap “runs.”  In the US this typically means parts of New England and the upper midwest during a 6-week window in early spring, beginning approximately March 1.

Sap is kind of the lifeblood of the tree.  Picture the tree as if it has tons of tiny straws just under the bark all the way around it.  The sap runs up and down those tiny straws and brings nutrients to the tree.  If a tree that’s too young is tapped it can die.  If a large tree has too many taps put into it, it can be harmed as well, so care must be taken to preserve the health of the tree.  A general rule is that any tree under 10″ in diameter shouldn’t be tapped.

What is “tapping”?  First, a hole is drilled into the tree.  Not so deep as to harm the inner wood, but far enough to cut through those little straws.  A spike is then gently tapped into the hole and the sap begins to drip into a collection bag or pail.  Each day the sap is collected and then boiled down into syrup.  The sap to syrup ratio is about 40:1, so it takes 10 gallons of maple sap to make one quart of syrup.

It’s a very labor intensive project.  Most of the sap boiling is done outdoors or in a “sugar shack.”  We will be using my grandfather’s wood stove outside and then bring it inside to “finish” it.  Maple sap is considered syrup when it reaches about 66-67% sugar.  The easiest way to determine this is to measure the temperature.  At 7*F above the boiling point of water, it is done.

You can then wait for it to cool to about 180*F, pour it into a mason jar, tip it on its side to sterilize the top, and wait for it to seal.  It can be stored in the pantry after it seals but should be transferred to the refrigerator after it is opened.

After all the beautiful history and nostalgia of real maple syrup, it’s difficult to even bring up the “other” stuff.  That stuff in the plastic bottle typically has zero actual maple syrup in it.  I looked at the ingredients of several varieties on LabelWatch.com and the ingredients are almost unanimously:

And what is “natural butter flavor” anyway?  These imitation syrups are a far cry from Real Food.  If you can’t afford real syrup or don’t have access to it, I am a huge fan of apple butter on my pancakes in lieu of syrup, or even jam or fresh berries. When you shop for maple syrup you may be confused by the way it’s labeled.  Grade A, Grade B, Grade B Amber, what does it all mean?  Syrup is graded on its color.  Grade A is lightest and has a milder flavor.  Grade B is darker and more maple-y.  Nutritionally there isn’t a whole lot of difference, but I’ve read that some people prefer to use Grade B because it has a stronger flavor and they can, therefore, use less (and in doing so decrease their sugar intake).  Others prefer Grade A for a light maple taste.

Grade is simply a matter of preference.  So whatever grade you choose, just make sure it’s the real stuff.  It’s nutritionally superior to artificial syrup, it’s a whole food, and it is supremely delicious.  The higher price tag is reflective of the amount of work and care that goes into producing it.  I know we may have to cut corners somewhere, but seeking out real maple syrup is definitely worth it.

What about you? Do you use real maple syrup?