Why Judging Moms Makes Us All Worse Parents |
AD 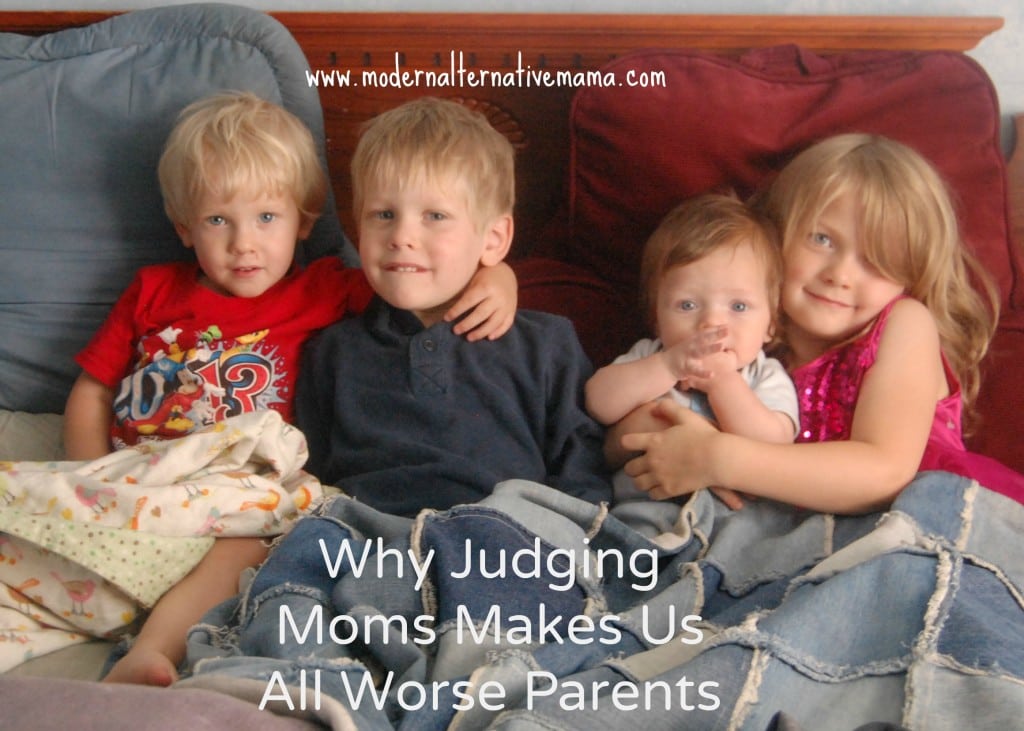 Why Judging Moms Makes Us All Worse Parents

Awhile ago, it was our grocery shopping day.

I didn’t actually have to take the kids.  My husband had taken the day off as a surprise, so I could have left them at home.  But I really don’t mind taking them and decided to give them a choice.  They all opted to go with me, even knowing I wasn’t going to buy them any treats.

Things were going okay at our first store until we hit the bulk bins.  They like to be “helpful” so my then-3-year-old walked over to one bin and grabbed the scoop.  I put it back, reminded him we weren’t getting that food this time and to put his hands back on the cart.  Then I grabbed a bag, walked five feet away, and began scooping up peanuts.  We had been talking for a couple of minutes how we were going to take our peanuts home and soak them so we could make our own peanut butter.

My son loves peanut butter.  And there are machines on the counter near where I was standing that make freshly-ground peanut butter and almond butter.

In the one minute, while I was scooping peanuts, I suddenly heard an electric grinding noise.  I quickly looked up, set my stuff down, and went over to him.  He had turned on the peanut butter machine (probably misunderstood what I meant when I said “we’re going to make peanut butter”) and it was pouring all over the counter.  I shut it off and stood there for a second, trying to think what to do next.  I was embarrassed and flustered and needed a moment to take a breath and think.

Then an older woman next to me said, “You shouldn’t have left them over there.”  Implying that if I’d been watching them, this wouldn’t have happened.  (They were maybe five feet away from me and in full sight.)

I felt even more embarrassed and upset and quickly put my son in the cart, yelled at him, sent my daughter to get an employee, and scooped up the mess myself.  Then I bolted out of there.

It was only after I was out of the store and had a few minutes to take a breath and calm down that I realized what I should have done: told the woman “Thanks, I’ve got this” and ignored her, then walked my son to find an employee together so he could explain what had happened (he was all too eager to tell everyone) and ask for help cleaning it up.  It would have been a great teachable moment for him about not touching machines if you don’t know what will happen and cleaning up messes even if they were an accident.  Instead, I’m sure all he remembers was that mommy was angry.

This isn’t the first time that someone — in both cases, an older woman — has made it her business to publicly comment on my parenting.  In fact, the first time, a year or so ago, was worse.  In that case, we were at the zoo and way at the back, in an exhibit that was basically deserted.  I needed to nurse a then-newborn Jacob, so I settled on a bench and let the kids play nearby.  They found some rocks, which they were tossing gently onto the sidewalk.

A woman walked up to us and told the kids to stop immediately and clean them up, and actually stood there, ignoring me, and waited for them to obey her.  A complete stranger, not a zoo employee.  I was so flustered there, too, that I told them to just do it, then got out of there quickly.

If I had it to do over, I’d have said, “Thanks, but they’re okay.  We’ll clean up when we’re ready to leave.”  They were not throwing rocks near anything or anyone; nothing was getting hurt!  They were entertained in a safe way so I could feed the baby.  We planned to clean up before we left.  What in the world was it hurting?

Had the woman not interfered in the grocery store situation, I would have had a moment to think and remember my son is only 3.  He was not trying to make a mess.  He didn’t know how the machine worked and he misunderstood what I said about getting peanut butter.  That is a mistake, and an accident.  He needed to be reminded not to touch without asking and to clean it up, and it would have been a great lesson for him.  But instead of parenting based on what he needed, I parented based on this woman’s judgment.

Same with the rock situation.  We’d have gathered up our stuff and worked together to put the rocks back — reminding my children that when we’re done playing, we clean up.  Instead, I yelled at them and made them clean up quickly and then sit down (not an easy thing for kids who were then 2 and 3), which was no good.

I am definitely a worse parent when my reactions are tempered by the judgment of strangers — perceived or actual.  (Perceived being glares, sighs, eye-rolling aimed in my direction.)

At what point did we decide it was okay to start judging moms and parenting other peoples’ children?

It is impossible to know what a situation is from the outside.  I remember an old story where a man climbed onto a bus with his three children and sat down in his seat and stared out a window.  His children ran up and down the bus, annoying other passengers.  He did nothing to stop them.  Everyone on the bus watched him, and the kids, and wondered who would say something.  Finally, someone did: “Sir, your children are out of control.  Please tell them to stop this and sit down.”  He looked up with sad eyes and said, “I’m sorry.  We’re on our way home from the hospital.  My wife, their mother, just died.”

No one said another word.  Their perspective had changed once they knew his hurt.  Could anyone say they wouldn’t do the exact same thing in that situation?  Unruly children were the least of his worries at that moment.

We just don’t know what a mama’s situation is.  We don’t know why she’s doing — or not doing — what she’s doing.  When did we decide it was okay to make assumptions and jump right in?

If you see a mama struggling, smile at her.  Tell her she’s doing a great job.  Tell her you’ve been there, too.  Do something to make her feel better.  Or do nothing.  But don’t make it worse!  Struggling mamas don’t need judgment and it will make them worse parents.

Plus, I know not everyone agrees with me, but unless a kid is doing something dangerous or that directly affects you, don’t parent the kid.  It isn’t your job.  If the kid is kicking you or is climbing up something precarious, by all means — say something to keep yourself or the kid safe.  If a kid is throwing a tantrum about something unrelated to you, keep it to yourself.  It’s the mama’s job and hers alone.  I know I feel flustered if others step in, whether they mean well or not.  I’m not an outgoing person and I don’t know what to say.  Let me handle my family and you can handle yours.

Ultimately we all need to forget about the judgment of strangers and just try to do our best.  Most of the time people aren’t watching you to see the ways you fail.  Most of the time they aren’t thinking about you at all.  And when they do notice, mostly they are sympathetic (I get far more smiles and compliments!  These two instances are the only two negative ones in the last two years).

We can’t avoid parenting in public.  So we try to keep what needs to be private, private (step out to discipline your kid, don’t let them have it in the middle of the produce aisle) and don’t contribute to the judging yourself.

What do you think?  Do judgmental attitudes make us worse parents?