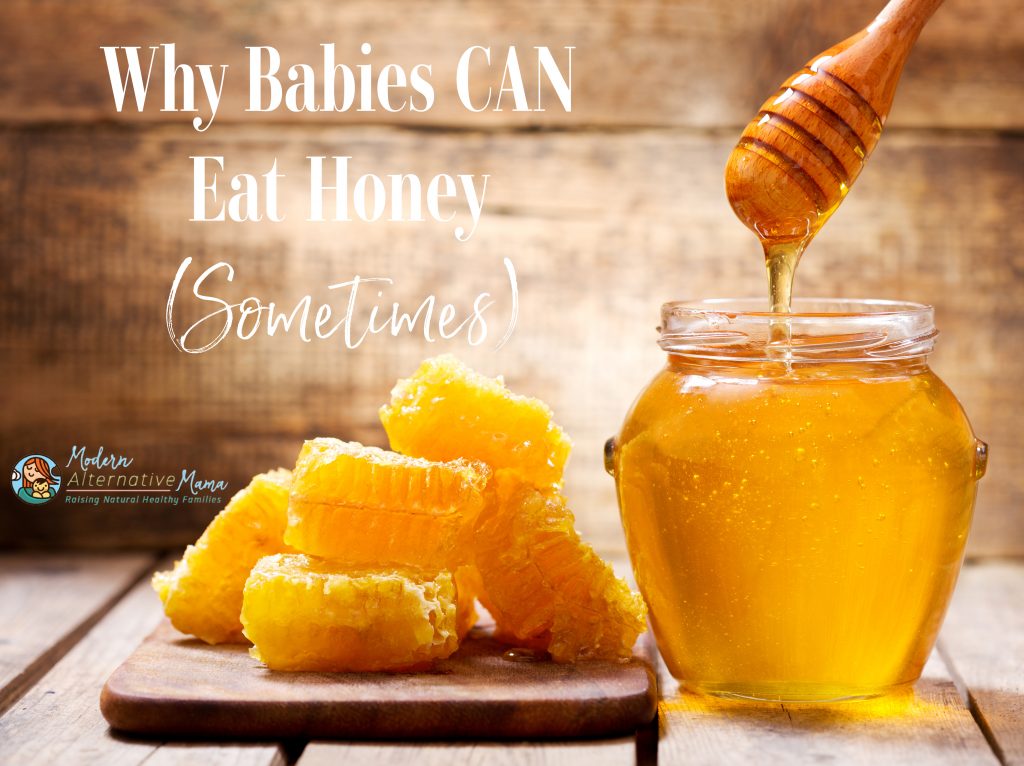 Why Babies CAN Eat Honey (Sometimes)

But — is it true? Where does that recommendation come from?  What does the science show?  At what point is it truly safe to feed babies honey?

I can never just accept what others believe as fact.  I have to do some digging myself to find out what the evidence actually shows.  So let’s dive in and take a look at the honey recommendations.

Why Skip the Honey?

The mainstream tells you to skip the honey because it can contain botulism spores, which an immature gut can’t handle (it could make the baby really sick), but an adult can handle.  Okay, babies do have immature guts — that part’s legit.  But what about the claims that botulism is found in honey or that an adult wouldn’t get sick from it?  What about the idea that one year is the cut-off point where infants can handle botulism? Where did those claims come from, and are they true?

There are no other reasons to skip honey, by the way.  It’s not a choking hazard, it’s not too sweet (obviously it’s sweet and should be used in moderation by everyone), there’s not something magical about it that makes it dangerous.  It’s the botulism concerns alone that drove the recommendation to avoid honey in babies under one year.

Where Did the Botulism Concern Come From?

Botulism is caused by the bacteria clostridium botulinum.  In adults and older children, the bacteria itself is harmless, but when it grows (usually in protein-rich spoiled food, like improperly canned meats) it produces a toxin that can be lethal even in small doses.  In infants, however, the bacteria itself can lodge in the immature gut and can produce the toxin, making the baby sick.

Clostridium botulinum is an anaerobe and is found commonly in dust, dirt, and on produce (from the dirt).  “Anaerobe” means that it doesn’t grow well in the presence of oxygen.

Honey is a thick, viscous liquid where the spores can reside, but not grow (not protein-rich).  Back in 1976, a few infants got sick with infant botulism, and it was ultimately traced back to honey in about half of the cases.  In a 1979 study, 9 out of 90 honey samples (all commercial) were found to contain low levels of botulism spores.  Only one of the 9 samples contained higher levels, more easily detectable.

It is important to note that infant botulism from honey was never noted prior to 1976, and in European countries, wasn’t reported until the early 90s.  Even then, there is an average of about 1 case per year in Europe, while the U.S. sees about 75 cases annually (U.S. data includes all cases of infant botulism; perhaps 20 or fewer are due to honey).  Most cases occur in babies around 3 months old, but have been reported from about 1 week to 14 months of age.

Interestingly, most cases occur in babies born to fairly wealthy, well-educated white mothers who are otherwise healthy and are likely to be breastfed.  In the majority of cases, the source of infection is unclear.

What changed in 1976 that led to botulism being present in honey?  This study explains that honey is highly likely to be contaminated by pesticides, herbicides, heavy metals, antibiotics, and more.  Unlike other foods, honey is not regulated very well and has no legal limit set on contaminants, including antibiotics.  The lower quality of honey may have led to the presence of the botulism spores.  A lot of honey is imported, too, and isn’t really pure honey.  It’s been filtered (honey is supposed to retain some of the pollen; that’s where its beneficial effects come from) and in some cases, adulterated.

Ultimately, the thought is that honey can become contaminated from dust and dirt which contain botulinum spores and this is how it gets to the babies.

Is It Really Dangerous?

The samples in the study cited above (where 9/90 samples were contaminated) largely contained tiny amounts of the spores.  Another study notes that about 10% of all honey contains botulinum spores prior to being brought into a home (where it could get contaminated due to use, such as from unwashed utensils).

On the other hand, the same study notes that about 65% of infant botulism cases are not related to honey.  Some sources note that corn syrup may also be contaminated.

The vast majority of infant botulism cases occur in babies who are 6 weeks to 6 months of age, although they have been reported rarely up to one year.  (Interestingly, another risk factor for infant botulism is having fewer than one bowel movement a day for a period greater than two months — this can suggest disturbed gut flora and greater susceptibility to the clostridium botulinum spores.  No, it is not normal for babies, even exclusively breastfed babies, to have infrequent bowel movements.)

Raw honey is known to have many benefits, as well.  One study shows that it is an effective antibiotic against staph bacteria, e. coli, and others.  Others note its effectiveness as a wound dressing or to treat burns.  Still others have had benefits from reduced allergy symptoms, improved cold/cough symptoms, and more.

Why Babies CAN Eat Honey (Sometimes)

Babies under 6 months should not get honey.  Their immature digestive tracts make it so that honey could be dangerous to them, if they were to receive one of the 10% of contaminated samples.

With babies over 6 months, I believe it is a judgment call.  If they are eating solids and need honey medicinally, a small amount from a trusted farmer may outweigh the potential danger.  The older a baby is and the more established his/her gut flora, the less dangerous it is.

Be aware of where you are purchasing your honey.  Don’t offer it to a baby as “food” due to the high sugar content, but a tiny amount in a 10-month-old to calm a cough and help the baby rest may be worth it.

The point here isn’t to tell you what you should do. If you feel safer avoiding honey until past a year, do so. It’s best to know where the recommendation came from and think critically about it.

Do you give babies honey?  Why or why not?