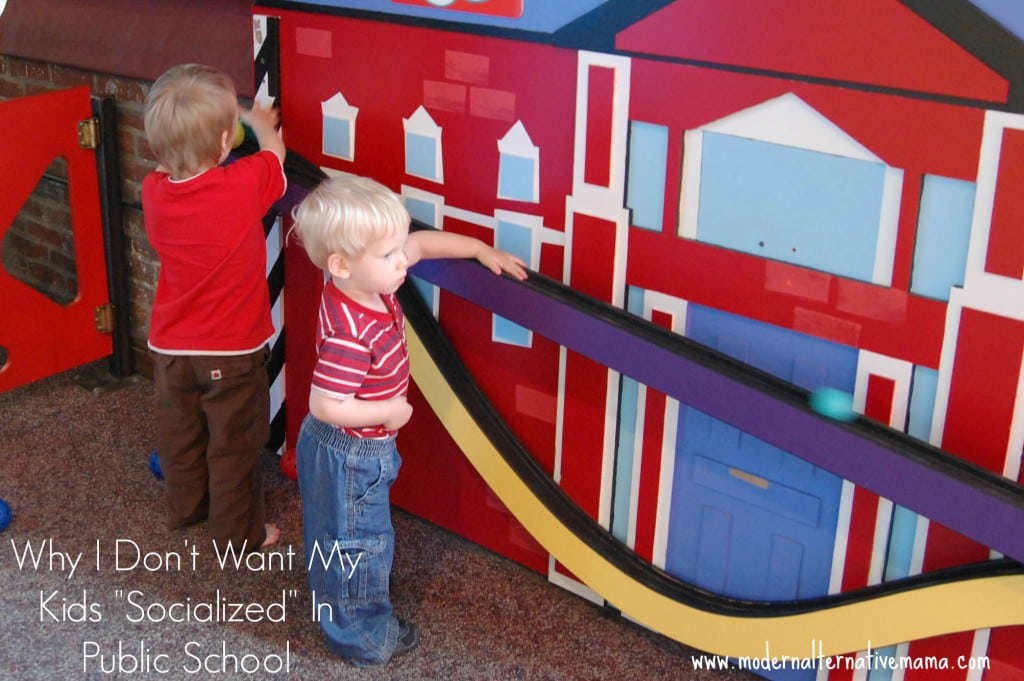 Why I Don’t Want My Kids “Socialized” in Public School

Probably the first and most popular “complaint” that homeschooling parents hear is “What about socialization?”

Now that my oldest is 5 and would be going into kindergarten this fall, people I meet have started to ask: “Is she going to school?  Where is she going?”  And then I answer, “We’re homeschooling…I’m not sure what school she would have gone to.”  (In my city there are many districts and many schools within each.  I really have no clue.)  Then I feel like that parent.  Oh, those weird homeschoolers who think they are better than others.

Totally not true.  Everyone chooses the type of schooling that works for their family.  This post isn’t about why homeschooling is a better choice (except, for us.  It’s totally better for us).  This post is why the socialization myth is one I absolutely have to bust.  It’s totally wrong that my homeschooled kids don’t socialize; there are lots of ways to accomplish that.  And I don’t want my kids to be socialized in a public school anyway.

I Went to Public School

I went to public school myself, K-12.  I know what it is like there.  I know that the kids can be curious about other ways.  I know for the first 3 – 4 years they overlook familial differences and don’t form any sort of “social classes” and they’re generally pretty inclusive.

But then, it changes.  Somewhere around the 4th grade, they start to figure it out.  Some people are “better” than others.  Some people are “weird.”  And weird is bad.  You can’t stand out.  Differences are not appreciated, especially if they are of the slow, nerdy, ‘strange’ (think, dresses in all black/enjoys reading encyclopedias for fun/would rather hang out with the lunch lady than the other kids) variety.

There is no way to avoid this.  Kids are naturally curious about what makes them different from others.  They are beginning to pick up on the attitudes of the adults around them, including their parents.  I don’t know a single adult who, in private, is 100% non-judgmental and inclusive.  And even if they are, there’s that little thing called peer pressure.

So many people grow up to hate those who tormented them in school.  Some never outgrow wanting to “show the bully” how successful they are, how they rose above the poor treatment they received.  There are entire books, movies, and TV shows dedicated to these issues.

Look at the wildly popular show, The Big Bang Theory.  How often do the characters on that show discuss how they wish their bullies could see them today, how nerds “really” run the world, and how the character Penny (who is of average intelligence and is considered beautiful, and was very popular in high school) used to be a bully and the fully grown Bernadette and Amy characters, both of whom have Ph.D.s and successful adult lives are “lucky” just to be her friend?

It’s not just fodder for TV.  It’s a reflection of the real world, in this case.  Schools are cracking down on bullying, working under a so-called “zero tolerance” policy (that is an issue for another day…).  Young boys and girls are committing suicide over teasing and torturing they receive in school because they are too stupid, too smart, too fat, too poor, too rich, too…something.

Having been on the receiving end of it the majority of my school years, I know what it’s like.  I know the feeling of being on the “outside” and wishing to fit, wondering why I didn’t, wondering how I should or could change.  I wish now I could go back 15 years and tell myself it doesn’t matter, that they don’t set the standard for what is good or right, and that there are many ways to be that are perfectly good and fine, even if they’re not common.  But this isn’t about me.

I do not want my children to pick up on “the way the world works” when they are still young and fragile.  I do not want them to think there is something wrong with them because we make different choices in religion, food, medicine, and so on.  They are fully well aware that we do make different choices — I am very honest with them that most other families vaccinate because they believe it is best for them, that they eat processed food because they don’t know it is not healthy, that their babies are born in hospitals, and so on.  They know that what we do is not that common outside our circle of friends (where most are a lot like us).

It’s not about hiding the world from them.  It’s not about pretending “all that other stuff” doesn’t exist.  That’s foolish, because someday they will realize and they will wonder, unless you tell them.

What it is about is letting us set the standards for them.  Letting us teach them what is right and what is wrong.  Letting us allow them to be who they are and grow confident in it.  It’s about keeping them away from this ridiculous peer pressure and impossible peer standards at a time when their identities are still forming.

It does not bother me now if someone thinks I am weird for canning food or not vaccinating.  I feel confident I’ve made the right choice for my family and I know that I don’t have to live to others’ standards.  Because I am an adult.  Kids just don’t have those solid convictions yet.  They can’t until they reach a certain age and learn to think abstractly and form their own sense of identity.  I want to help them realize whoever they are is okay, and help them figure out what that is, without the input of their peers.  They don’t need that sort of nonsense.

Maybe part of this is in reaction to what I experienced as a kid, but as I’ve noted, it’s only too real today — bullying is a huge topic in society.  The problem hasn’t gone away.  If I can save my kids from that, I will.

Living in the “Real World”

My kids still live in the real world, and so do I.

And yeah, they’re socialized.  They’re not shy at all (I tend to be) and they love to run up to people they meet and introduce themselves and start a conversation.  It does not matter to them if the person they meet is old, young, fat, thin, black, white, etc.  They are equally interested in all people.  They don’t care about differences.  They’re not going to be taught that one person is better or worse than another, because I’m not going to teach them that, and they’re not going to be in school to learn it the hard way.

The other day we went to the playground.  A woman stopped walking and turned off her music device to talk to all of us.  The kids introduced themselves and Nathan and talked to her for awhile, then she left.  Another woman and her two kids came along awhile later.  They introduced themselves to her, and started talking to the kids.  When the little boy (2) ran his tricycle into the playground and got it stuck on the ledge, my kids rushed to help him.

When the mail man drives by our house, my daughter begs to go outside and talk to him.

When we go to a playground or to the zoo or any other larger gathering of people, my daughter will pick up the baby and go introduce him and herself to a random stranger, then ask the stranger to hold Nathan for awhile, because she is so proud he is her brother and wants to share him.

When we visited my husband’s office, my oldest son offered to shake hands with every adult he met as he introduced himself (we didn’t teach him to do that, either — he’s picked up on it from observation).

My 22-month-old waves to people as we take walks.  If someone he doesn’t know should pick him up, he just smiles.

The kids run across people of all ages, races, religions, genders, and more every single day.  We also get together with friends fairly often and they have plenty of semi-supervised peer-to-peer time.  (What I mean by “semi-supervised” is like us moms sit on benches at the edge of the playground and chat.  We can see them, but we’re not micromanaging their interactions.)

They’ll grow up just fine, with a pretty good idea about what you might find in the world.  What they won’t grow up with is doubting if they are good enough.  Wondering if their peers are right, after all, and they’re too weird.  Wondering if making choices outside the mainstream really is “wrong.”  That’s the way I want it.  When they come across that first “bully” who would tell them they are too weird to fit in, I want them to laugh and say “There’s nothing wrong with me.  We’re just different people.  How do you know you’re just not cool enough to hang out with me?”

How do you feel about kids being socialized in public school?  If you are sending your kids to public school, how are you combating the bullying issue?