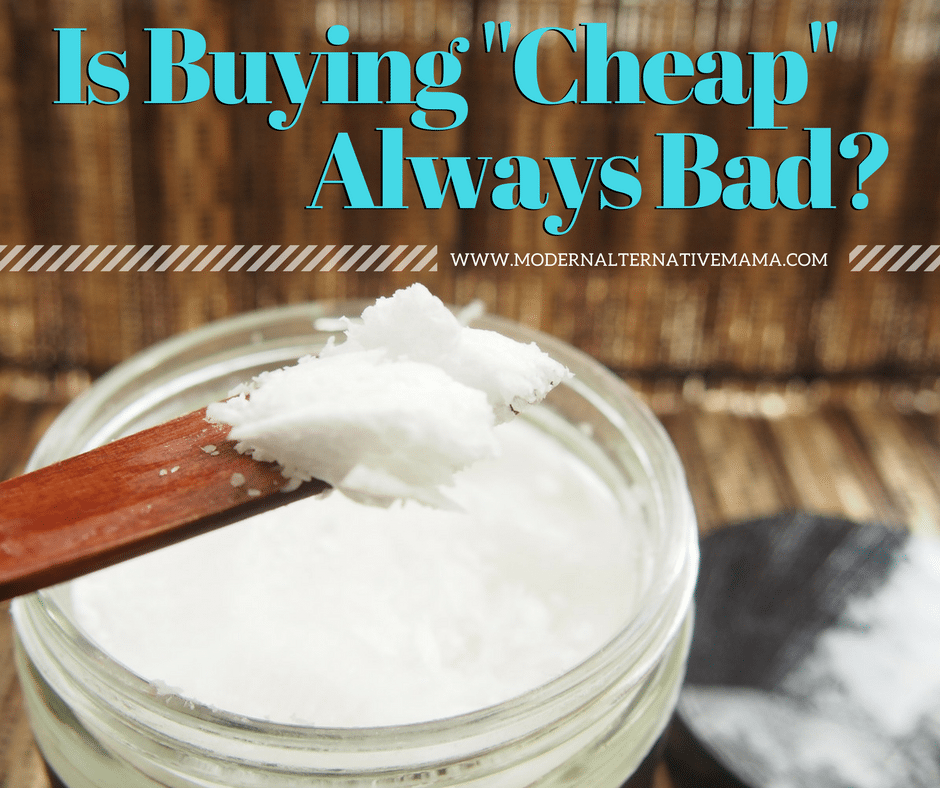 Last week, I read a post by The Healthy Home Economist about why buying coconut oil at Costco is bad.  It seems that someone had emailed her to ask if her coconut oil, which had an “off” smell, was truly bad and if so, why.  It just so happened that the woman had purchased Carrington Farms brand at Costco, which sells for around $15 per 54-oz. jar.  This is far cheaper than most other places, so based on the woman’s experience and the price alone, Sarah (the blogger behind The Healthy Home Economist) concluded that buying “cheap” was the problem.

Concerned, I immediately looked up the brand in question.  I haven’t bought it yet, but my coconut oil is almost gone and I had been thinking about doing so.  I wanted to know what I was getting into.

I found that, unfortunately, the original post had been rather poorly researched.  It appeared that when the email came in, it corroborated something the author already believed, so she simply wrote the post to warn everyone else, without looking into the matter further.

It is so important to do your research on anything and everything.  Even if you only spend 5 minutes searching google to see what others are saying (that’s really sufficient in a case like this, where we’re talking about a simple food item).  I did exactly that.

The company in question, Carrington Farms, produces virgin, cold-pressed coconut oil.  It is organic, unrefined, and free of BPA and hexane (a solvent used to extract oils sometimes).

One criticism levied against the company was that they labeled the product “extra virgin,” a term which doesn’t apply to coconut oil.  However, many of their packages (like the ones on Amazon) do not say this.  They simply say “virgin” (which does apply).  Many other companies also use the term “extra virgin” to refer to coconut oil, including Nutiva, Nature’s Way, Barlean’s, Jarrow Formula, Vitacost, Artisana, and more.  In fact, almost all the brands listed on Amazon — including ones that are known to be reputable — use this term.

The reasoning behind the use of “extra virgin” is that people are familiar with it from olive oil, and associate it with “top quality” oil.

Another criticism was that the company must use an inferior process, or cut the oil with other vegetable oils.  There is no evidence for this.  The company states that it is 100% unrefined virgin (or extra virgin) coconut oil.  There is no reason to believe it is anything else.  I checked several blogs and websites for reviews of the product and the only “negatives” I could find related to cost of the product in one place vs. another, and none had anything negative to say about the quality of the oil.  Not a single review mentioned any “off smells” or tastes in the oil.

It would be hard to add another oil to it because coconut oil is pretty unique.  It’s clear when liquid (most oils are yellowish), it’s white when solid, and it solidifies until it reaches 76, while other oils are liquid even while refrigerated.  The oil, if blended, would behave drastically differently.  If little shreds of coconut were left in the oil, this would be evident at the bottom of the jar — and I have seen no one mention this.

It is probably likely that this particular oil went “off” from having been in a very hot garage for several months, or perhaps it was an odd bad jar.  Regardless, it seems to be an isolated incident and certainly not worthy of warning people off the brand entirely!

Is “Cheap” An Indicator of Quality?

While price is generally correlated with quality, it is certainly not always the case!

Costco is known for being able to offer high-quality items for lower prices.  They can do this because they sell such a high volume.  I personally shop there every couple of weeks and can find excellent deals on fairly high-quality items.

In addition to the coconut oil (some Costcos sell Carrington Farms; some sell Nutiva; both appear to be good brands), they also carry Tillamook cheddar, which I recently learned is mostly grass-fed and raw (as raw as you’re going to get outside of small artisan cheesemakers, anyway), for only $3.35 – $5/lb. depending on style.  They have an imported raw Romano cheese as well, and Kerrygold butter.  These are just a few of my favorite items!

It’s true that Costco carries Kerrygold, for example, for around $4.50/lb., which is about what I pay for regular old organic butter (not grass-fed).  Any other store carries Kerrygold for $7 – $8/lb.  That doesn’t make Costco’s Kerrygold inferior; it means because of the volume they sell, I get a really good deal.

If you see an unusually cheap price on an item, go home and look it up.  See if it’s cheap because it’s lower quality or because it’s an awesome deal.  I haven’t yet found an item at Costco that I would otherwise consider that was low-quality.  (Now, they also sell plenty of items that are not “real food” that I wouldn’t consider, but we’re going to ignore those.)

You know what?  We all have food budgets and we all have to be realistic.  Sometimes, we’re not going to be able to afford the absolute top quality.  Sometimes we need to go with “good enough.”

If Carrington Farms coconut oil is nothing but coconut oil, then perhaps the rest doesn’t matter.  I could pay $45 for a gallon, or $15 for just under 1/2 gal.  Guess what I’m going to do?  It’s still real coconut oil.  I don’t know the the quality isn’t the same.  And even if it’s not, my food dollars stretch further when I get food that’s “good enough” even if it’s not “perfect.”

We have enough guilt over what we feed our families and what we do with our dollars without needing to worry that what we can afford to buy from stores like Costco “isn’t good enough.”  I’m happy that I’m feeding my family coconut oil and Kerrygold butter instead of margarine and soybean oil!

Don’t feel guilty.  Don’t look at the price tag and think “this can’t possibly be good enough, I have to spend an arm and a leg to feed my family.”  Don’t get caught up in that silly nonsense about “pay the farmer now or pay the doctor later.”  While there’s some truth to it, we can’t feel guilty about what we can’t afford!  We live in the real world here, and any “real foods” are better than none, even if not perfectly sourced.

No guilt here, and go ahead — buy your coconut oil at Costco!  🙂

What do you think — is cheap always bad?