10 Lessons I Learned from my Home Births |
AD 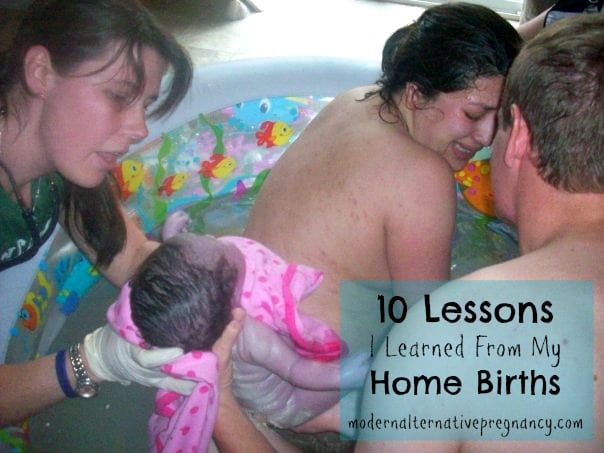 10 Lessons I Learned from my Home Births

When I was pregnant with my third child, I made a life-changing decision: I switched from my OB who told me “I had no choice” to a home birth midwife. I’m very grateful for the decision I made and had two amazing, redemptive home births with that midwife that I’ll never forget. I’m also on the path to becoming a home birth midwife with the goal of empowering mamas to make their own birthing choices. Mamas, not doctors (or midwives, or politicians) are the ones who choose how they give birth.

Reflecting on those two home births, I realized that I learned several lessons not only about pregnancy and birth, but about myself as well:

Women were created to give birth. Period. Everything about our design is optimal for bearing children, so we should trust our bodies to do what they were made to do. They can do it. We can trust that birth is safe.

My doctor never once talked to me about nutrition, however, it was one of the main things my midwife addressed. After my midwife helped me make changes to my eating habits, I felt much better and my elevated blood pressure went down to normal.

There are a lot of fears and misconceptions about birth that many of us need to unlearn. I know I did. I did a lot of preparation for my home births. I read books, watched videos, even attended a doula training workshop. I needed to know what was normal and what I should expect so that I could approach my births confidently, not fearfully.

Humans are animals. And if you look at how other animals birth, you will see that instincts certainly come into play. Other animals seek out quiet, dark places to give birth, places where they feel safe. The same was true for my home births. My instincts were to get in water. I took baths daily through every pregnancy as it was so soothing. I also rocked instinctually, on a birth ball, using the rhythmic motion to help me through contractions.

Breastfeeding is natural, but not necessarily easy

My first two attempts at breastfeeding were not good. And I know now that a lot of it had to do with my own misconceptions. I thought that I would just get it. After all, breastfeeding is natural! But I was woefully unprepared and had no support to help me with troubleshooting problems. So, like my last two births, I also went into breastfeeding those kiddos with lots of information and support.

Women need to be in control

I was blessed to have a hands-off midwife who let me be in control of my birth (she also gave me many options during pregnancy and helped me make informed decisions, rather than making decisions for me). Rather than making me move for her convenience, she quietly checked baby heart tones wherever I was most comfortable. When I felt ready to push, she quietly donned gloves and guided my husband as he caught our babies. She never made it her birth – she helped me to make it my own.

Hands off and out, please

With my first two births, I had my cervix checked so many times by so many people that it makes me blush thinking about it. With my last two babies, the only time my midwife did an internal exam was when I asked her to (and thankfully I was almost full dilated with just a little lip of cervix left). I never felt pressured to be examined (which, thinking about it, seems like that should be the norm, not the exception – they are our private parts, after all).

Sadly, my oldest kids were whisked away from home when I was in labor with my third child. Thinking about it now, I wish they would have stayed. When I gave birth to my last child, my husband woke up our oldest as I got close to pushing. He had asked if he could watch his little brother be born, and even though it was the middle of the night, we knew we wanted him to be there. I’m so glad he was. Our normally hyper, always-moving boy was calm, sweet and so gentle toward me as he watched his little brother come into the world.

With my first two births, I labored mostly in bed. I was allowed to sit in a rocking chair while the pitocin got to work, but after the doctor insisted on breaking my water to “speed things along” I was stuck in bed. I was even scolded for not being still enough for them to monitor the baby and threatened with more drastic measures.

My home births were such a stark contrast. I moved around as I pleased, instinctually, getting in the most comfortable positions I could. When it came time to gave birth, I got on my hands and knees and let gravity help me. Doing that opened up my pelvis much more, making for some fast deliveries.

I’m a huge fan of water birth. I’m sure a lot of it has to do with my love of warm water, but I know many women feel the same. Water birth has been found to speed up labor, give moms more feelings of control, reduce perineal trauma and even speed up labor. When I finally got in my birth pool, I was able to relax even more, making my intense contractions much more bearable (my labors are hard and fast).

Did you learn any lessons from your birth(s)?