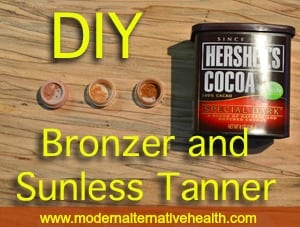 I have been experimenting lately with making my own sunless tanner. Why would I want to do that? I don’t like the chemicals that the commercial ones are made with. Many self-tanners contain parabens which are chemical preservatives, dioxane  a reported carcinogen, and synthetic fragrances. These chemicals have been linked with cancer. So, in my opinion, it is best not to put them on my skin. If I want to be anything other than pasty white this spring, my only other option is to make my own sunless tanner.

I decided to try a few different things and see what worked best for me.

First, I used some lotion (Burt’s Bees) that is white in color. Next I chose 4 different ingredients to try to make a sunless tanner (which turned out to be more like a bronzer). The first ingredient was powdered dark chocolate, and the other three ingredients were three different shades of mineral makeup. Next, I applied each in spots on my clean shaven and exfoliated leg.

Result: I didn’t like the chocolate at all! It was very streaky, and made my hair follicles stand out more. One of the colors of mineral makeup was so light that it didn’t make a difference at all. Another of the mineral makeup colors turned out to be too red. And the other was just about right. I decided to put on pants and wear them all day to see what the verdict was at the end of the day. What happened? Each one was still there at the end of the day, but had worn off a little and was slightly lighter in color. Also, I discovered that my white socks had touched the bottom of one of the spots it tanner and the makeup had rubbed off on them. So, that means that I won’t be wearing white or any light colors when I do this in the future.

Here is a different method: Staining your skin with tea.

I used 6 bags of black tea, boiled in 1 quart of water and allowed to cool. Then, I poured the tea into a small spray bottle. With my leg in the bathtub (it is pretty messy), I heavily sprayed the bottom of one leg. I soon discovered that the tea ran everywhere and if it had been allowed to dry that way, it would have been streaky and splotchy. I decided to rub that in with a sponge to make it more even. I allowed that to dry, and applied another THIN layer with very light sprays. I then allowed that to dry and repeated those steps 8 times to achieve a very light tan. In the end, I was pleased with the result. I think this method is probably the best, but I am concerned that the stain would rub off on my clothing, and would come off if I got wet for some reason. I circled the area that has the tea on it. It isn”t extremely dark, but you can tell a difference. {I had an idea, why not put some of the “bronzer” I made with the makeup and lotion on top of the tea? I chose the color that I like best with the brown colored mineral makeup and applied it to the top of the tea stain. It made it slightly darker, and more shimmery. I like the combination look the best of all. (Sorry I didn’t get a photo!)} Do you have any experience with DIY sunless tanner? If so, what worked for you?