Is Formula Ever “Better” Than Breastfeeding? |
AD 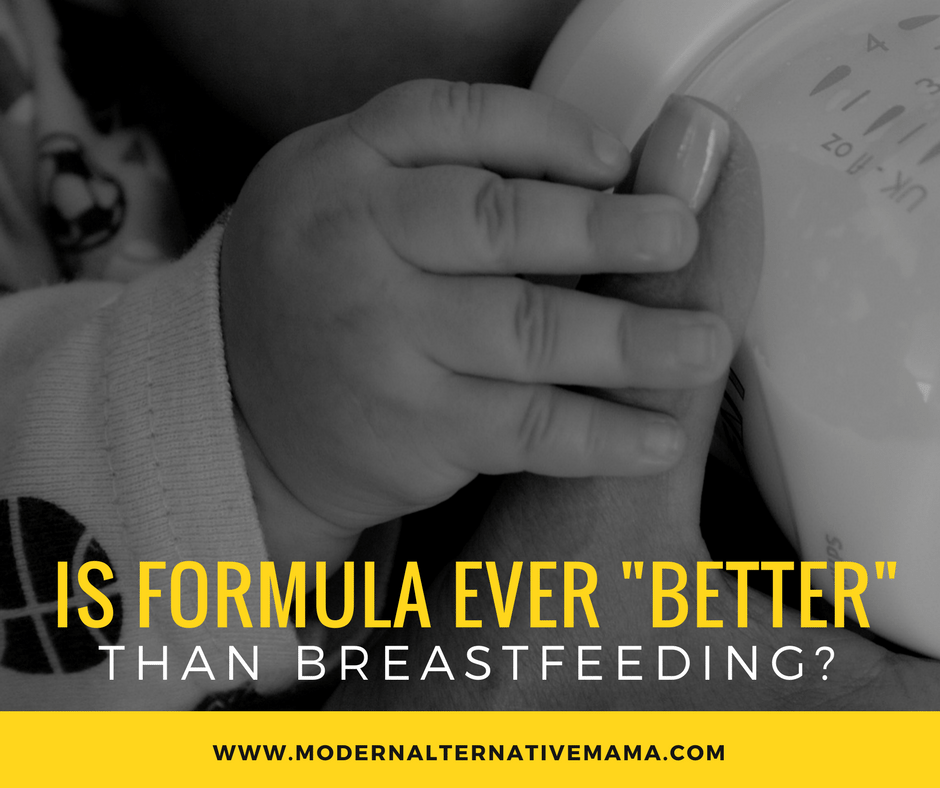 Is Formula Ever “Better” Than Breastfeeding?

First — please take note.  I am not writing this to insult formula-feeding mothers.  This isn’t a debate about what is “best” for any individual mother or child.  There are a lot of social and emotional factors that go into making the decision on how to feed your baby as well.  This post is intended to address the issue from a nutritional standpoint and as a response to the controversy stirred up recently by the Weston A. Price Foundation’s stance on breastfeeding.

Recently, the Village Green Network sponsored the “Healthy Living Summit.”  One of the most controversial talks to come out of this series of podcasts was a talk by Sarah Pope, The Healthy Home Economist, on breastfeeding.  She, and the Weston A. Price Foundation have officially recommended that breastfeeding is optimal only if the mom is well-nourished.  Otherwise, donor milk or even formula are preferred.  Here is their official statement:

This was originally posted to the Debunked Facebook page.

Many mothers have taken great offense to the idea that formula, whether commercial or homemade, could ever be better than breastfeeding.  Sally Fallon Morell claims to have scientific evidence to support this recommendation.  But what does the evidence really say?

The Recommendation to Breastfeed…Or Not

What is this recommendation based on?

Without having read Morell’s new book, I am just guessing, but it appears that the recommendation is based on possible micronutrient content of breastmilk.  For example, vegan diets can easily be deficient in vitamin B-12 and A, which are two critical nutrients for growth and development.  If the mothers are seriously deficient, then their breastmilk will be as well (especially if they are long-term vegans with little to no stores left in their bodies).

This seems to be WAP’s concern.  But, is this concern in and of itself founded?

A study of moms who fast during Ramadan showed that certain nutrients were affected by their restricted diet.  Zinc, magnesium, and potassium decreased significantly during the period of fasting.  And the researchers did recommend for optimal nutrition for both mom and baby, that lactating mothers be excused from fasting.

Yet another study shows important omega-3 fatty acids, including DHA, were higher in vegans than omnivorous mothers  (B12, also critical, was lower in vegan mothers).  On the other hand, this study showed that DHA levels were significantly lower in vegan mothers as compared to omnivorous (less than half).  Essential fatty acids are critical to infant’s development, so this is important.  Since DHA and other omega-3s were associated with a lower risk of allergy and asthma, this is important.

Still another study shows that despite no differences in diet, a group of mothers consisting of three different ethnicities showed marked differences in fatty acid composition of breastmilk, suggesting that there is more than just diet that plays a role in milk composition.

So what we know is that the composition of breastmilk varies from mother to mother for many reasons, diet being only one of them.  We also know that the diet of different women may be vastly different despite how it is labeled.  An omnivorous mother could eat lots of veggies, whole grains, pastured meats, etc. or she could eat largely processed foods with few veggies.  The same goes for a vegetarian or vegan mother, minus the meat (i.e. whole grains, nuts, seeds, coconut oil vs. refined grains).

A processed diet is not optimal regardless of what it contains and the mother’s health can suffer — we know this.  It is also possible that certain diets are not exactly optimal for baby, either — as shown by the fact that some breastmilk from vegan mothers is low on essential fatty acids and B12.  And this does matter.

But…should this be the primary consideration?  If we are looking at only nutrient content, we might be able to cherry-pick data and make the same recommendations that WAPF made.  Breastfeeding, however, is more than just nutrients.

The Importance of Breastfeeding

Breastfeeding has so many other benefits besides simply essential nutrients.  These benefits come from both additional characteristics in the milk itself, and the actual act of breastfeeding.

Breastmilk itself contains immunities that are crucial to a baby’s immune system development.  This includes important IgA and TGF-alpha (immunoglobin A and Transforming Growth Factor alpha, respectively).   IgA protects the immature, open gut from allowing proteins to leak into the blood (possibly leading to allergy development) and helps the gut to mature.  It also helps to protect the baby from infections.

Breastmilk contains probiotics, which influence the immune system as well.  New research shows it contains over 700 different species of probiotics!  (And by the way, this study shows that using probiotics rather than antibiotics is a more effective treatment for mastitis.)  Breastmilk also contains stem cells!

Interestingly, fresh breastmilk (ideally directly from the breast) is best.  Thawed breastmilk led to more stress responses in preterm infants than did fresh breastmilk.  Preterm infants given donated breastmilk (which is pasteurized) had lower levels of inflammation and cholesterol as teens than did formula-fed babies.   In another study, though, infants given donated (pasteurized) milk or preterm formula did not show a significant difference, while those fed their own mother’s milk did better.  These were severely premature infants (less than 30 weeks’ gestation).

Breastmilk contains 50% of its fat as saturated fat, suggesting that higher levels of saturated fat are beneficial and necessary for growth and development.

Besides these benefits to the immune system and development, breastfeeding has many other benefits.

Breastfeeding — the act of, not the milk itself — reduces an infant’s pain response.  Of course, it promotes bonding between mother and baby and may help the mom to get more sleep.

The Bottom Line on Recommendations

There’s a lot of research that still hasn’t been done.  We don’t know how, exactly, the nutrient content of breastmilk varies from mother to mother, both based on diet and other factors (like ethnicity or health status), or even how it varies from day to day or month to month in the same mother. Since we don’t have solid data on this, we can’t logically conclude that a particular, specific diet is “best” for all mothers or that it produces superior breastmilk.

We can conclude that breastmilk is better than formula because of its many constituents that formula lacks — and that’s only including the ones we know about.  The 700 strains of probiotics were only mapped in early January of this year!  A few short years ago, we didn’t know that breastmilk contained any probiotics at all.  It’s only been in recent years that we’ve discovered the stem cells and RNA in breastmilk as well.

We don’t know yet what else we will find in breastmilk, but it’s far more than “food” for infants.  It is a living fluid that helps them to grow and develop optimally.

What we also know, however, is that diet does appear to have some influence on the nutrient content.  Mothers who consume foods high in omega-3s or who supplement with them tend to have greater levels of these beneficial fatty acids in their milk.  Mothers who take probiotic supplements tend to have greater levels of probiotics (not always the same strains as they are taking) than mothers who don’t.

It’s also important to note that despite what some say, the amount of fat in breastmilk is highly variable, and is likely at least partially related to diet.

Formula should never be recommended over breastmilk, regardless of the diet of the woman (this is for general recommendations — not specific, individual situations).  There are too many constituents and benefits of breastmilk that cannot be matched in formula, no matter how healthy the formula is.  Good formula options should exist for those who cannot or choose not to breastfeed, but formula should not be considered “superior” nutritionally.

We need to be able to have a conversation about how diet impacts breastmilk and that while a “special diet” is by no means required, women should take care to nourish themselves as well as possible during pregnancy and breastfeeding.  A perfect diet isn’t needed or even realistic.  The fact remains that diet does impact the nutrient quality of breastmilk cannot be ignored or avoided in order to avoid women feeling like they can’t “meet the requirements” to breastfeed.

The perfect diet is not a requirement to breastfeed.  Women who “fail” to eat a nourishing diet can still breastfeed and it will still be the best option for most.

Women will feel better (since breastfeeding will pull from their own nutrient stores) and their milk will be positively impacted if they eat a healthy diet.

Salmon, greens, pastured meats, and eggs, grass-fed butter — these foods will nourish women (and babies) better than donuts, fries, and frozen dinners.  But since breastmilk contains so much more than “just” nutrients, breastmilk will be superior to formula on either diet.  (But please don’t live on donuts and fries!)

That’s the bottom line — yes, maternal nutrition impacts breastmilk.  No, maternal nutrition (excellent or abysmal) does not mean that formula is ever the “overall” better option.  (And yes formula might be better for individual women, but not for a sweeping recommendation.)

My order of recommendations:

What do you think about this controversy?