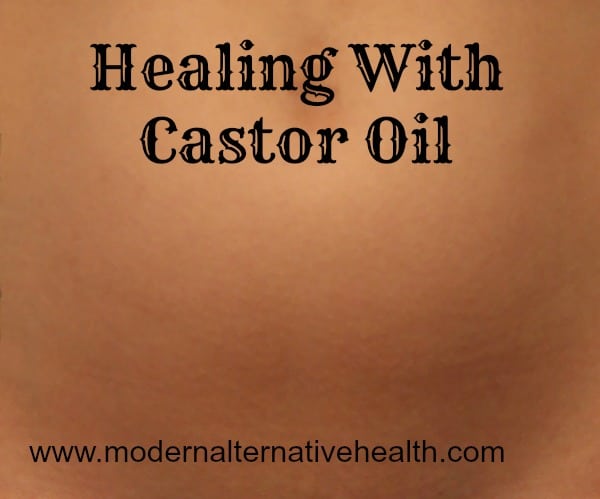 Christened “The Hand of Christ” in the Middle Ages because of its miraculous healing power, castor oil is one of the most amazing healing substances.  Castor oil has been used since Ancient times to cure a wide range of diseases and boost immunity.  What”s so special about this unsaturated, omega-9, triglyceride of fatty acid?

How The Body Works

The lymphatic system works hand in hand with our circulatory and digestive systems to move nutrients to our cells and carry toxins away to be eliminated from the body.

When our individual cells assimilate the food and oxygen delivered by the blood, they work like tiny little factories expelling excess fluid and large protein molecules.  Due to the impurities and toxins in the food we eat, and the process of changing our food into sustaining nutrients, there are waste byproducts released into the surrounding tissues.  If we didn’t have a system in place to remove this waste, we’d soon swell up and die of toxic poisoning and asphyxiation.  That’s where the lymphatic system comes into play.

The many miles of lymphatic vessels and glands move these excess fluids, proteins and waste back to the blood so they can be reused or eliminated.  The Thymus gland, the spleen, and Peyer’s patches are also part of the lymphatic system.  The lymph nodes found all along the vessels act like little filters and produces antibodies when foreign proteins are encountered.  You’ve probably had tender, swollen lymph nodes in the past when your body is fighting an infection.

We”ve been talking about how the lymphatic system works with the circulatory system but I also mentioned the digestive system.  Part of our lymphatics includes areas in the small intestine called Peyer’s Patches.  Their job is to absorb about 90% of fat molecules which are generally too big to pass through the intestines directly and pass them along the lymphatic system releasing them in to the blood.

So what happens when our lymphatic system isn’t doing its job?  A simple test for excess fluid can indicate that our system isn’t working properly but the problem is that by the time this test is effective, our fluid levels are 30% higher than normal indicating a serious problem.  At this stage the individual cells are pushed apart and away from the blood vessels limiting their ability to absorb nutrients and oxygen and causing them to live in their own waste and toxins.  Some cells die and others begin to deteriorate causing organ function to suffer.

When castor oil is absorbed through the skin, lymphocyte counts increase, lymph flow increases.  As you can imagine this has huge positive impact on our tissues and organs as they begin to function more normally.  We feel more energized, saliva pH alkalizes and our general feeling of well being increases.  Fats, which are the foundation to hormones and other building and repair components, are more easily absorbed.  Our body can actually “breathe” at the cellular level allowing everything to function better.

Nearly 90% of this fatty acid is ricinoleic acid; a substance unique to castor oil and thought to be the reason for its effectiveness in preventing the growth of many bacteria, viruses, yeast and molds.  Although castor oil is famous as a digestive aid, its  real value comes from topical application.  Applied to various areas of the skin, it works by being absorbed into the tissues and organs beneath.

How can castor oil be used?

Castor oil packs or fomentations are the next step in applying castor oil transdermally.  It’s a little messy and time consuming but very effective at delivering a fast, deep dose of healing ricinoleic acid to tissues by heating a castor oil soaked cloth applied to the body.

Earth Clinic had this to say about castor oil packs:

“A castor oil pack is placed on the skin to increase circulation and to promote elimination and healing of the tissues and organs underneath the skin. It is used to stimulate the liver, relieve pain, increase lymphatic circulation, reduce inflammation, and improve digestion.

Castor oil packs are a traditional holistic treatment for a range of conditions, such as: cholecystitis (inflammation of the gall bladder), poor eliminations, epilepsy, various liver conditions such as cirrhosis and torpid liver, scleroderma, headaches, appendicitis, arthritis, incoordination between assimilations and eliminations, colitis, intestinal disorders such as stricture and colon impaction, incoordination between nervous systems, neuritis, and toxemia.”

Castor oil packs are made by soaking a piece of flannel in castor oil and placing it on the skin. The flannel is covered with a sheet of plastic, and then a hot water bottle is placed over the plastic to heat the pack.

A castor oil pack can be placed on the following body regions:

Safety precautions: Castor oil should not be taken internally. It should not be applied to broken skin, or used during pregnancy, breastfeeding, or during menstrual flow.

Place the flannel in the container. Soak it in castor oil so that it is saturated, but not dripping. Place the pack over the affected body part. Cover with plastic. Place the hot water bottle over the pack. Leave it on for 45-60 minutes. Rest while the pack is in place. After removing the pack, cleanse the area with a dilute solution of water and baking soda. Store the pack in the covered container in the refrigerator. Each pack may be reused up to 25-30 times.

It is generally recommended that a castor oil pack be used for 3 to 7 days in a week to treat a health condition or for detoxification.

Earth Clinic also offers lots of testimonials from folks who’ve tried their remedies and provided empirical evidence to their effectiveness and the nice thing is they give both sides to the issue.  I can speak for the healing power of castor oil from my own experiences, too.  It has been very effective in treating perimenopause issues surrounding cysts, fibroids and irregular bleeding that has led to my anemia.  During a period of gallbladder pain, I applied a castor oil pack to the area for several hours and the next day I actually passed several gallstones and the pain subsided.

Note:  when applying heat to the castor oil pack, I’ve found that a heating pad set to the highest temp tolerated seems to work best.  That may be for a couple of reasons including better absorption due to open pores or the viscocity of the thick oil thinning but it could also have to do with the bodies ability to rid itself of pathogens at higher body temps.  Using a heating pad is also recommended in several places where castor oil packs are discussed.

How do you use Castor Oil for healing?

You can learn more about preparing these preparations at home by visiting The Woodwife’s Journal @ Herbal Medicine Chest ~ Compresses, Plasters, Poultices and Fomentations