Why Breech Isn’t the End of the World |
AD 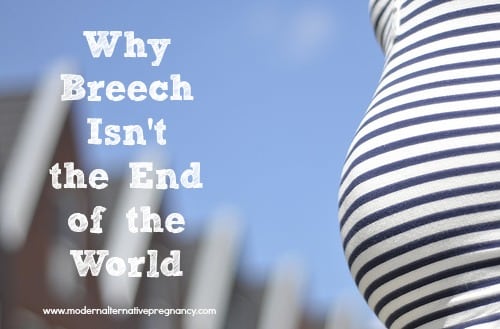 Why Breech Isn’t the End of the World

You’re pregnant, and your baby is breech. Breathe. It’s not the end of the world.

As babies develop and grow, they freely move around inside a woman’s belly. Up until about 30- 32 weeks, the baby is swimming all throughout the mother’s belly. By about the 32nd week in pregnancy, the baby has grown, and the space in which the baby moves around has become limited; therefore, the baby doesn’t move as much. At around 31-32 weeks of pregnancy, one in three babies present as breech. By birth, that percentage diminishes drastically to 3-4%.

The problem with our modern society is that there are very few professionals that are skilled in breech delivery. Therefore, it makes having a vaginal breech birth very difficult to carry out. For instance, there are only two doctors in the Los Angeles area that are open to delivering vaginal breech births. One delivers in the hospital and the other delivers at home births.

Breech delivery is no longer taught as a skill in medical schools in the United States. Even thoughDr. Karin Blakemore, of Johns Hopkins in Baltimore, Maryland, said, “There are well-known criteria for a safe vaginal breech birth,” the real negative tone-setter for the breech situation came from the Term Breech Trial.

This study, published in 2000, concluded that it’s better for a women to have a planned cesarean than a vaginal breech birth. This study was conducted only by ObGyns in a hospital setting. There were no midwives, no home births, and far too much drug and machine intervention. The women were wired up and flat on their back in a bed. Not a desired situation to give birth if you ask me.

Why do babies turn breech?

About 96%-99% of babies turn head down prior to birth. That percentage increases when just looking at full term babies. When a baby does not turn head on his or her own, the reason is placed in one of two categories- structural or functional.

Structural reasons could be things like uterine malformations, fibroids, fetal abnormalities, multiple births, or even the location of the placenta.

Functional causes can include fixated lumbar spine and/or sacroiliac joints, hypertonic hip flexors and gluteus muscles that are not allowing the pelvis to expand naturally, and any other musculoskeletal issue that does not allow the pelvis to function dynamically.

What to do when your baby is breech

If your baby presents as breech, the worst thing you can do is stress. Meditate, let it settle, and then take action. There are numerous healing modalities in our world that have been available for centuries to encourage the baby to flip and to support the woman during a vaginal breech birth.

As a chiropractor and biomechanical specialist, functional causes of breech babies are where we can be of great help. A chiropractor can balance the muscles, release ligament tension, and deliver specific adjustments to put the body in an optimal structural alignment. This can allow your pelvis to open and function dynamically while walking and even during labor and delivery. An optimal environment gives your baby a little more room to move around.

Acupuncture offers a treatment called moxibustion in which you burn an herbal incense around your little toes. This stimulates movement in the baby almost immediately. Reiki and other energy healers can bring the energy fields and chakras back into harmony.

Chiropractic treatment, coupled with acupuncture and home inversions, have offered great success to women in our office. You may be asked to return four times in one week or once a week until delivery. This depends on your body and what is going on.

When a baby presents breech, slow down and take a look inside yourself. Be calm and check out of the fast-paced life for a few days. There are numerous healers out there. Be open to what the world has to offer. And remember, there are such experiences as vaginal breech births, and they are safe and normal.

There are numerous techniques and movements utilized during labor to help the woman maneuver her body and give birth safely to her baby. Find the practitioners that you love and trust. Here’s what you can do:

Have you experienced a breech birth or thought you might have to?