Why This Attachment Parent Let Her Baby Cry It Out |
AD 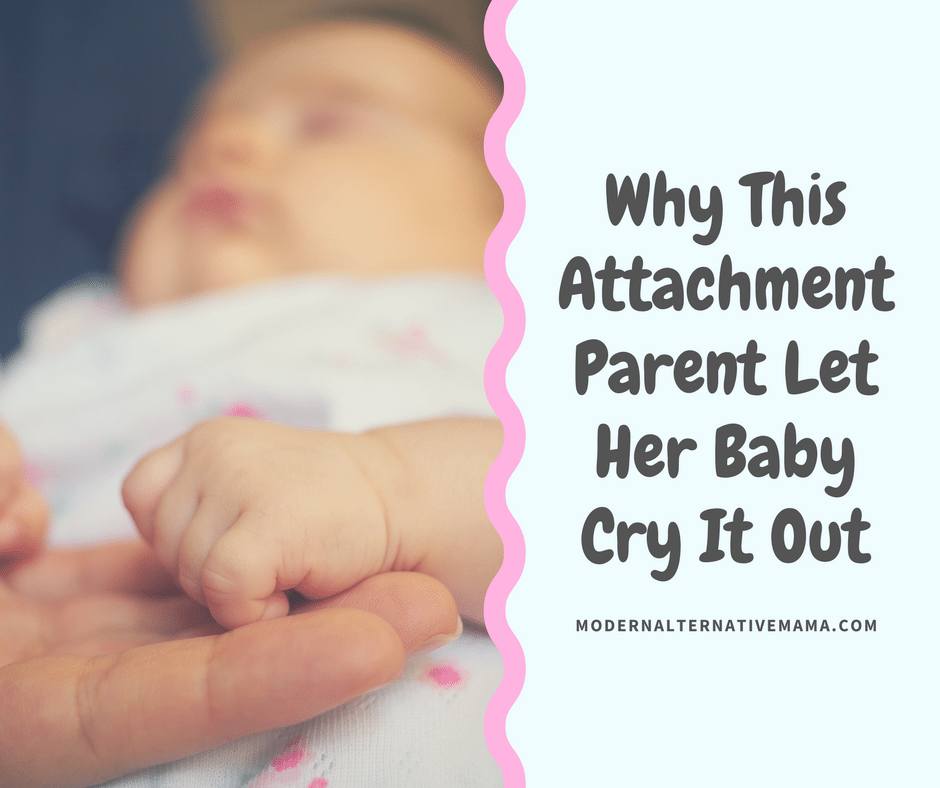 Why This Attachment Parent Let Her Baby Cry It Out

I love attachment parenting. Co-sleeping, nursing on demand, baby-wearing, baby-lead weaning…it all just makes so much sense to me. Or at least it did. Until my daughter was born nine months ago.

Our Son: The Perfect Candidate for Attachment Parenting

I was about as gung-ho as an attachment parent could be with my son, Caedmon, who is now three. From the start, his strongest need has been for physical contact. He slept with us, on us, or near us for every nap and nighttime until he was two. He nursed to go to sleep, nursed back to sleep, nursed to wake up, nursed when he was healthy, nursed when he was sick. He didn’t want solid food until he was one, because his on-demand nursing was filling him up plenty. Even now, he says several times a day, “Mommy, I need you,” which really means “Pick me up and give me a hug, mommy.”

He is and was the perfect candidate for an attachment-style of parenting. I think now that he was also what Dr. Sears describes as a “high-need” baby. Thank you Dr. Sears, for giving me the perfect tools to parent a child like Caedmon!

Our Daughter: A Different Story

As much as we love our son, we were hoping, maybe, that #2 would be a little less demanding of physical contact. I didn’t want to throw AP completely out the window, but I knew that with two children I just wouldn’t have time to wear her and lie down with her all the time.

It did not take us long after meeting our daughter to realize she was a completely different kind of baby. From the start, Esther did fine with a little more personal space. She would go to sleep on her own, some of the time, just by being swaddled and laid down in the co-sleeper. She even slept “through the night” (I hate that phrase) without any “sleep training” (I hate that phrase too) at 6 weeks of age! We were thrilled!

But a couple months into her little life, things started to break down. She would not fall asleep easily on her own anymore, so we tried walking, patting, rocking, swinging, and wearing. She would eventually fall asleep, but not until our arms and backs were ready to collapse. We pulled out all the tricks in our attachment parenting bags, with the assumed knowledge that we would not leave her to cry. Nothing was working and we were exhausted.

I called my mom crying one day when Esther was about 4 months old. “Mom, I can’t do this anymore! She just won’t nap. We’ve tried everything. She eventually falls asleep and then wakes up after five minutes. I’m exhausted!” My mom, a wise, wise woman, said, “You just haven’t figured her out yet. Every baby is different. You just need to figure out what works for Esther.”

Exhaustion. Desperation. And Letting Her Cry.

One sleep-deprived day soon after, out of desperation, we laid her in her crib and let her cry. It was hard. Dr. Sears was in the front of my mind, telling me that she needs me. That babies need to be parented to sleep. That I was doing her harm. That she has a need that is not being filled but rather is being pushed further down into her, to a place where she will no longer hope for it to be filled.

I tried to ignore that voice. It didn’t work. So I argued with it instead: “But we’ve tried everything! We’re exhausted! We can’t do this anymore!”

While this internal dialogue was going on, Esther was learning how to fall asleep by herself. The first night, it took about 20 minutes. And then she slept for 8 hours straight.

The next day, I felt like a new woman! I was not a weepy, sleep-deprived emotional mess anymore. I could do this mom thing, oh yes I could! So we kept at it. The next night she only cried for 5 minutes, and her crying was not “the bad cry,” as I call it, but more of a whimper. She was just calming herself down. This pattern continued, and Esther can now put herself to sleep for naps and nighttime, usually quite easily.

It Hasn’t Been Easy

Now, I am not about to tell you that it has been smooth sailing the whole time. Every time Esther’s sleep gets on track, either someone gets sick or we go out of town to visit family, and everything gets thrown off. She is a child of routine and familiarity: she loves her own space, with her white noise and dark curtains, and does not sleep well away from home.

After a sleep setback, we sometimes hear a little more crying than we would like while she re-familiarizes herself with her sleeping space and normal schedule. If the crying is going on for longer than we feel comfortable, or she’s crying hard instead of whimpering, we go in and see what she needs. Sometimes she hadn’t nursed enough, or she has a dirty diaper, or her room feels cold. We make sure all her physical needs are met, give her a hug and a kiss, and leave the room again. And she goes to sleep.

We have also found that she does best in her own room. If we sleep in the same room with her, she does not settle easily. This resulted in co-sleeping for awhile, which resulted in no-sleeping for me. She is not attached to me in the same way Caedmon was: he just melded right into my body. No, she is her own presence and we really cannot sleep well together. Since we only have two bedrooms, for now this has meant that we share a room with our son, instead of Esther. He loves having us close by at night, so it’s a win-win. (Though we are looking with longing toward a potential move in a few months to a home with three bedrooms!)

It has been odd, and surprisingly difficult, to realize that what Esther really needs sometimes is for me to step back and give her some space, instead of snuggling, comfort nursing, and baby-wearing her. I had to throw away some of my one-size-fits-all notions of attachment parenting. I thought all babies slept better near their parents. I thought all babies could be comforted by the breast. I thought all babies loved being worn for many hours a day.

And I thought making babies cry it out and having them sleep all alone was cruel.

She has taught me all this, and she is only nine months old! Imagine what I will have learned from her by the time she is eighteen.

What have your children taught you about parenting? Have they ever forced you to question your parenting philosophy?