How I Went From "I Can't Keep My House Clean!" to "I Got This" and You Can Too.... - Modern Alternative Mama
AD 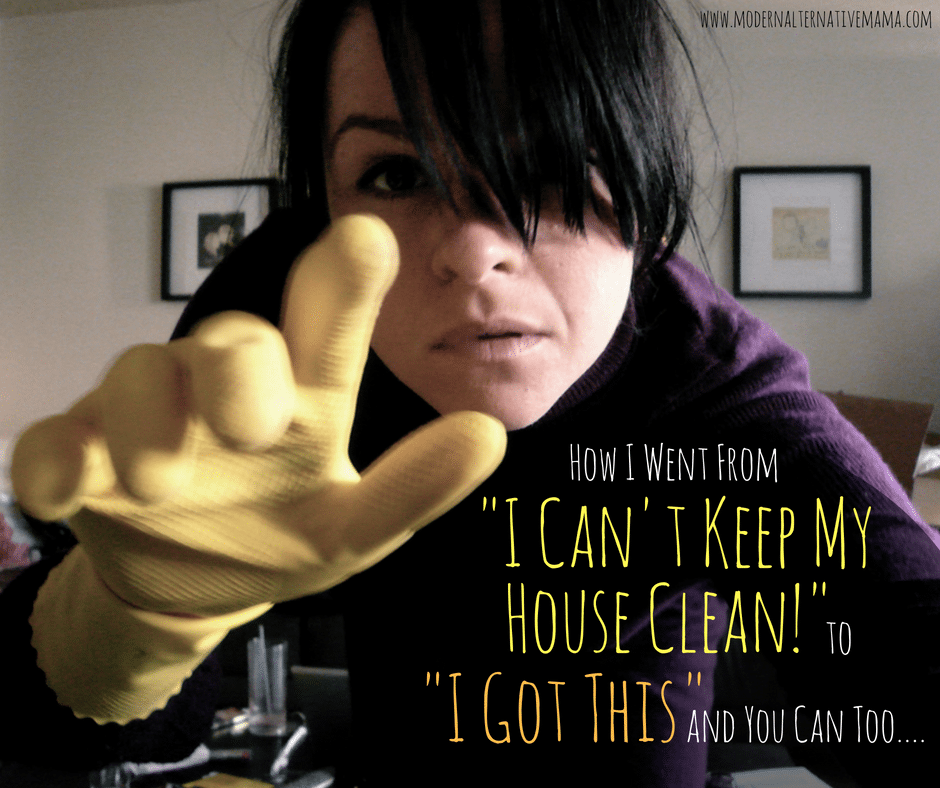 If you told me three weeks ago that I would be writing this post I would say that either you were lying, or that I was being overly ambitious.  You know, that I had grander ideas in my head than would work out in real life.  I’m not the world’s greatest homemaker and I have struggled to keep my house clean (though I’m learning and improving) and this is a scenario that played out in my home too many times to count:

Ben and I spent all.day. cleaning the entire house — scrubbing and vacuuming and sweeping, until it was spotless.  And I declared — “This time I will keep it clean.  I will.  I will not let that happen again.”  Three or so days later, I stood in the middle of a disaster of a house.  Again.  And I moaned, “How did I let this happen?!  Why does this keep happening?!”

Does that sound familiar?

I decided that I was tired of it.  For real this time.  And that I was going to step up and take responsibility and make sure that it did not happen again.

It’s been over two weeks, and you know what?  It hasn’t.  Even with my insane week of no heat, a broken stove, and tons of stress — I did not let my house fall into chaos.  It is just as clean as it was when I started.  Are you curious?

The biggest change was simply my mindset.  See, I have this problem.  I like to leave things until “later.”  I walk by and see a toy on the floor and I think “I should really pick that up…well, later.”  Or I see some dishes on the counter that have some stuck-on food on them, something that will take more than two seconds to shove in the dishwasher.  I leave it till “later.”  I’d set my plate down after eating in a room other than the kitchen, figuring I’ll take it to the kitchen “later.”  I’d drop my clothes on the bathroom floor, and tell myself I’d pick them up “later.”

Well, as I’m sure you know, by the time “later” came, stuff had really piled up and I was pretty disgusted with myself.  What is wrong with me?  It would have taken two seconds to do…and now look at this mess.  Sometimes it was especially annoying if I had decided to leave something that had spilled until “later,” because instead of five seconds to wipe up the mess, I had to scrub it for a few minutes.  This was really a waste of my time….

I decided that I was going to stop waiting until “later” to do things.  I was going to do them immediately, and make cleaning up a priority.  I was going to see the mess for what it was and just take care of it.  When I encountered a task that I thought “I’ll do that later,” I would ask myself, “Is there a reason for waiting until later?  Or would it be simpler to do now?”  In rare cases ‘later’ might be better — for example, if I wanted a dirty pot to soak awhile so it would be easier to clean.  For the most part, though, I was done with “later.”

Right, well, we can be done with “later” all we want, but what does that actually look like?  How do I really keep my house clean? I feel almost silly even saying some of these things, but since it took me, oh, 27 years to catch on, maybe others are still struggling too!

Some more clarifying on the “it’s your job” part, which I know some of you might not like: if you see it as your job, then you won’t feel so angry that others aren’t pitching in!  You can’t control them, ultimately…you can only control you.  (By the way, my husband *does* help quite a bit when he can.  He often helps me catch up on laundry over the weekend, does the dishes on the weekend/if I’m busy, cleans our room, etc.  Any time I am busier than he is, he picks up the slack.  So don’t think I’m suggesting husbands should just sit around and do nothing.  But if you’re home and he’s not, you get to do the majority.)

Those are my major points.  And I know…the explanations are long!  Sorry about that.

The biggest part of this is that you have to make yourself actually do it.  Nothing works unless you do it.  Sometimes I am tired and the kitchen is kind of messy and I think, I really don’t want to do this now.  Instead I make myself spend 5 minutes to make it look better — just five minutes, if I’m really tired — and then I get to the rest after I eat or sleep or whatever.  But I don’t let it go long.  Never more than overnight. 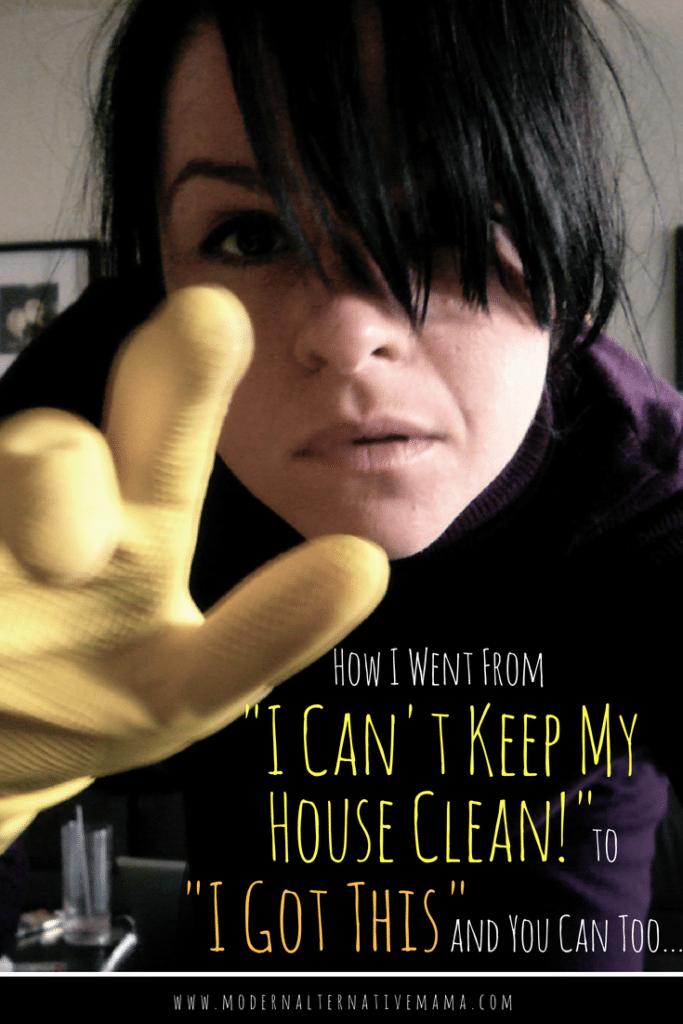 Make It Work for You

Everyone’s home and routines are going to be different.  I have certain chores I do at certain times of the day.  I wrote about our general schedule a couple weeks ago.  That’s still true — except I pay a little more attention to the details now.

The biggest thing is to decide you are going to keep your home clean, and start tackling one area at a time.  Once it’s done, make yourself keep up with the maintenance.  It will ultimately save you time, I promise.  It’ll take five seconds instead of two minutes to wipe a spill that’s fresh.  It takes a few seconds to rinse a newly-used plate and stick it in the dishwasher, vs. scrubbing dried-on junk for several minutes.  Many dishes that I wash immediately, I don’t even bother to wash, just rinse.  (Measuring cups used for dry things, knives used for fruits or vegetables, cutting boards used for fruits and vegetables or bread dough — really anything that isn’t meat.)  It’s so much easier when I just do it immediately.

I suggest starting with the kitchen, because you’ll be in there all the time and you want to make sure that you’re not looking at a mess.  Plus you can’t cook in a messy kitchen!  Scrub it down then make a point to keep it clean — dishes done after every meal, everything put away, counters wiped down.  Sweep the floor every couple of days or as needed.

Find a schedule that works for you then stick to it.  Self-discipline is really the biggest key.  Not especially fun, I suppose, but it really does save you time and it makes me feel much calmer and more patient to walk through a mostly-clean home.  I feel angry and anxious when I walk through a messy home and I’m way more likely to yell at people.  Isn’t it worth it just for the peace?

So that’s my big “secret” system.  No secret really besides self-discipline and (not-too) hard work.  🙂

How do you keep your home clean? 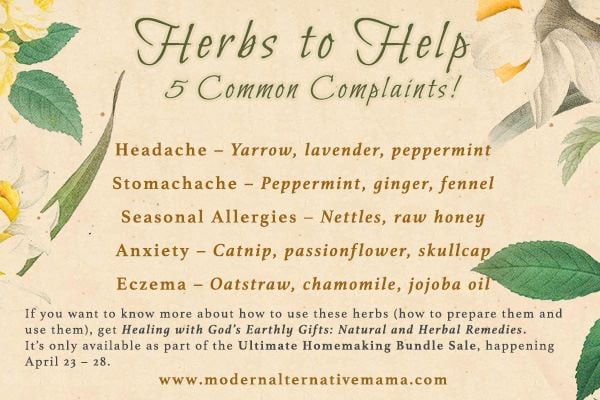 Find out how you can get a set of 10 herbal remedy printables, like the one above, FREE — click here.