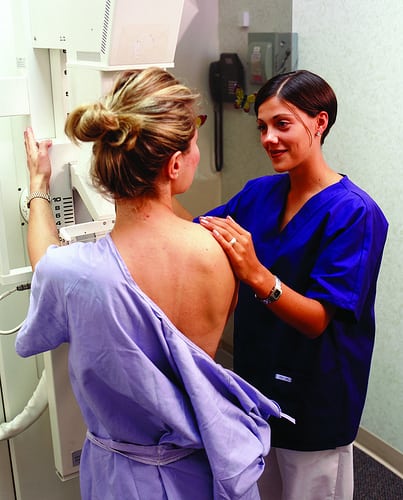 My mom told me that she had breast cancer in late 2011.  She said that she noticed a red spot on her right breast that was tender to the touch.  A few months later she felt a lump in that same breast.  She went to her doctor who promptly did a mammogram followed by an ultrasound and biopsy.  The ultrasound tech, on the day of the scan, said that she needed immediate surgery to remove the breast and asked if she would like to have both breasts removed just in case.  She was stunned.  I was not happy for reasons which I will talk about later but for now let”s discuss mammograms.

What Is A Mammogram?

Mammography involves taking multiple X-rays of the breast tissue using “low-dose” ionizing radiation in an attempt to detect cancer.  During the process, a woman”s breast tissue is compressed in order to get a clearer picture.  A “screening mammogram” is often followed by a “diagnostic mammogram” if any suspicious findings are seen by the radiologist.

How Accurate Are Mammograms?

Dense tissue, like that typically found in women under 50 years old, is notorious for producing both false negatives and false positives.  The false positives result in anxiety, more mammograms and often painful surgical procedures.    In 2009 the U.S. Preventive Services Task Force recommended mammography every 2 years for most women from the ages of 50-74 to reduce the incidence of anxiety, unnecessary surgery and the small but real possibility of breast cancer induced by excess radiation from the mammograms themselves.  They concluded that the evidence did not substantiate routine mammograms in women under 50 or over 74.  The recommendations mean a woman would undergo just 13 mammograms by 75, rather than the 35 she would experience if she began annual testing at age 40.  This created an uproar from many mainstream doctors and cancer organizations like the American Cancer Society (ACS) and the National Cancer Institute (NCI) who were recommending mammograms starting at age 40.  They claimed that such messages were putting womens” lives at risk.

In 2011 the  concluded that mammograms reduce mortality from breast cancer by a absolute amount of only 0.05%.  According to their analysis, 1 in 2,000 women will have her life prolonged by 10 years of screening, however, another 10 healthy women will undergo unnecessary breast cancer treatment.  Additionally, 200 women will suffer from significant psychological stress due to false posivitive results. They questioned whether mammography screening does more good or harm and stated that universal screening may not be reasonable.  I”m sure you can guess the reaction from the ACS & NCI.

How Safe Are Mammograms?

If a cancer is already present, the compression from the procedure can rupture vessels and cause the cancer cells to spread.  Doctors used to be instructed to avoid over-manipulating suspected tumors to avoid this possibility but somehow this advice doesn”t apply to mammography.  The amount of radiation to one of the most sensitive tissues in the body can also be substantial.  I have seen research that a single mammography screening can result in the equivalent amount of radiation given in 1000 chest X-rays.

Are They Saving Lives?

Women whose breast cancer was detected by screening mammography before the appearance of a lump or other symptoms commonly assume that the mammogram saved their lives.  Most cancers found by mammography fall into 1 of 3 categories:

1. Cancers that are not very aggressive and later detection would have resulted in the same outcome.

2. Cancers that are casino are so aggressive that even “early” detection doesn”t save her life.

3. Cancers that would have receded on their own or are so slow-growing that the woman would die of other causes before the cancer produces symptoms.  Ductal carcinoma in situ (DCIS) is now being seen and diagnosed as early stage breast cancer in women (stage 0).  DCIS is in fact not cancer & simply a calcification of the milk ducts that often does not progress to cancer.  A diagnosis of DCIS often leads to unnecessary invasive treatments.   This is skewing the cancer survival rates as these women as being counted among the “survivors” of breast cancer and used by cancer societies as “proof” that screening works.

That being said, there are a small number of breast cancers that are detected by screening mammography and whose treatment outcome improves as a result of earlier detection.  Data suggests that between 3-13% of breast cancers fall into this category.  In other words, mammography produces no benefit to any of the remaining 87% to 97% of women. Can we do better?

MRIs are one option that don”t involve ionizing radiation, however, these are not practical for large scale screening due to the high costs involved.  Thermography, on the other hand, which involves the use of thermal imaging,  is a great option that doesn”t involve ionizing radiation or compression and can detect abnormalities years before mammography.  Also, unlike with mammograms, breast tissue density and surgical implants don”t affect the ability to interpret the scan.  Unfortunately, because this imaging isn”t covered by insurance, few women hear about or seek out what many, including myself, consider to be a superior imaging option.  The cost is typically a few hundred dollars.

So why was I so upset about what had been done to my mom?  Well let”s put the stupidity of the tech”s comments aside and talk about the procedures that were performed.  The mammogram was, in my opinion, completely unnecessary.  An ultrasound could have been performed from the start particularly since she already knew exactly where the lump was located and a skilled technician can view other areas of the breast for possible tumors. Ultrasound does not emit ionizing radiation or compress the breasts which can potentially spread cancerous cells from a existing tumor.   Additionally, an ultra-sound is also more specific when it comes to deciphering between a solid mass (more suspicious of cancer) vs. a fluid filled mass (more likely a benign cyst).  I understand that mammograms are the standard of care, however, I would very much like to see that change.  Women should know that they have options and shouldn”t let their health-care be dictated and limited by an insurance company.

Do you have any stories that you would like to share related to mammograms and breast cancer?