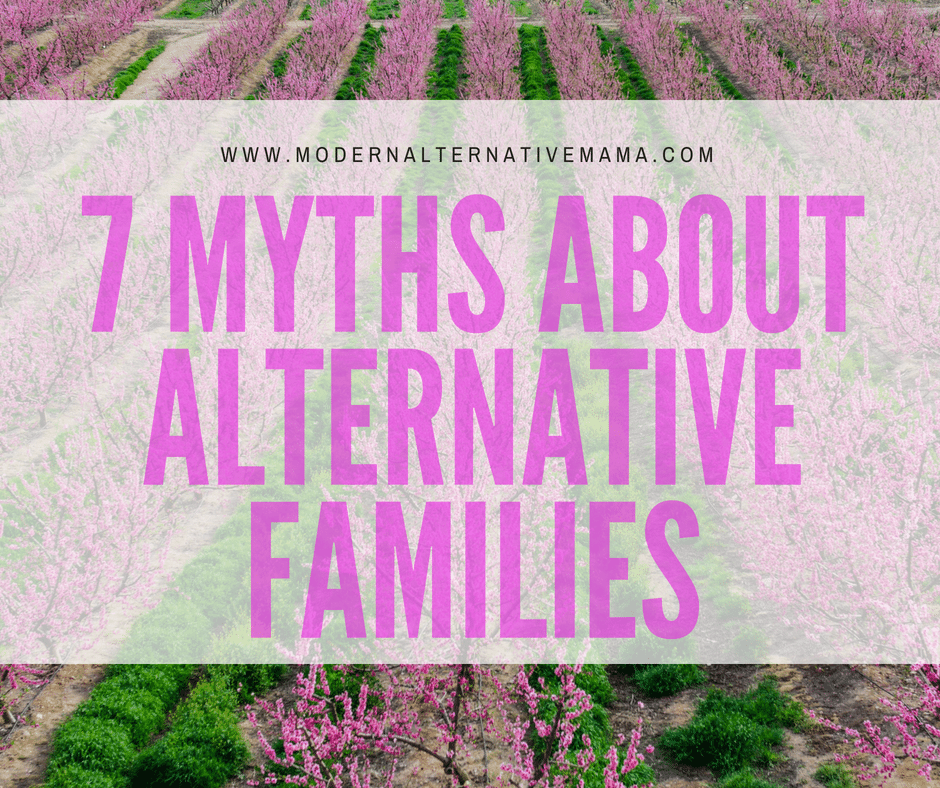 If you haven’t noticed, we’ve been focusing on “myths” this month.  There are a lot out there to bust!

I figured I’d end the month with a subject near and dear to many of our hearts: myths about “alternative” families.  Myths many of us hear every day!  I’m hoping that for this post will address the concerns of those who are very new to or even unfamiliar with why someone would choose to live an “alternative” lifestyle.  This is a post that (hopefully) you can share with family and friends who have concerns about your lifestyle because it will be “neutral ground,” so to speak.

So without further adieu…myths about ‘alternative’ families!

Truth: There are many different ways to be alternative.  ‘Alternative’ families are just as different as any other family.  Some homeschool; some send their kids to public or private school.  Some vaccinate fully; some vaccinate on a delayed/selective schedule or not at all.  Some don’t eat meat, some don’t eat grains, and some don’t have any special restrictions on diet.  Some co-sleep with their kids until they’re elementary-aged, and some put them in a crib from day 1.  Each family makes different choices, depending on what’s right for them, and there really is no stereotypical “alternative” family.  There are certain things that are more likely, but each family is unique.

Truth: This myth stems from the fact that many alternative families don’t necessarily trust “official” sources of information on diet, child-rearing, education, and so on.  They look to various alternative sources.  However, they are not “conspiracy theorists.”  They look for solid research to support their choices, and this can be found within the mainstream!  It is just not as talked about.  The best way to know why a family has made a seemingly ‘weird’ choice is to simply ask them, with an open mind, rather than assuming that they are into weird internet conspiracies.  You never know what you might learn!

Truth: Well, I can’t say none are. 🙂  In general, though, alternative families aren’t making choices because of what anyone else thinks about them.  They’re not saying “No thanks” to those cookies because they think that you shouldn’t be eating them.  And they’re not telling you how amazing ginger is because they think that you’re crazy for not using it.  Most alternative families feel like they “woke up” and suddenly found all this new information.  As they’re exploring these new ways of doing things, which are often very successful for them, they get excited.  They want to share.  They want all the people that they love to be able to know these things too!  It is *not* a judgment, it is just eagerness and excitement.  If you’re not ready to hear it yet, just say, “Thanks, I’m glad that’s working so well for you!” and change the subject.  Most will take the hint and nobody needs to be upset.

Truth: Every family is different and their needs are different.  While it can be hard to accept certain choices that go against the status quo, please know that families have thought long and hard about their choices.  They love their children and only want them to be healthy, safe, and happy. If you are strongly against not vaccinating or homeschooling or home birth, it can be hard to know that someone you love is making the choice to do one of those things.  Please know that families do not make these choices lightly!  Families think, pray, research until they feel totally satisfied that what they are doing is really, truly best for them.  The best way to handle it is to say, “I don’t really understand or agree, but I love you no matter.”  Believe in your hearts they are doing what is best for them, even if it’s not what you would do.

Myth #5: Alternative families are forcing their kids to miss out

Truth: Everybody makes memories in a different way.  For some, it might be important that children go to public school, or be allowed candy freely around the holidays, or whatever.  Others make different memories.  Most alternative families don’t really make their kids “miss out,” they just do different things with them.  Maybe instead of being in school during the day, they’re exploring a museum together!  Or instead of candy they’re baking healthy cookies together!  There are so many different experiences to be had out there, and none are necessarily “better” than others.

Myth #6: Alternative families are all hippies

Truth: Well, some are.  Most don’t define themselves that way, though.  There are as many different motivations for making alternative choices as there are for making other choices.  Some are doing it due to health concerns.  For some, it’s religion.  For others, concerns for the environment.  The list goes on.  Just like there’s no standard set of choices that an alternative family makes, there’s no standard reason for doing so, either.  The best way to know why families have made the choices they have is to ask!

Truth: This seems to be what people say when they feel so strongly different that they can’t figure out another family.  So, they write them off as ‘crazy.’  In truth, alternative families have strong, personal reasons for being alternative.  Their worldview might be very different (it probably is).  That does not make them “crazy” though.  Alternative families have to face a lot of negative attitudes from people who don’t understand their lives, who feel judged, and who judge them.  It can be hard sometimes, and many have resorted to simply refusing to discuss their choices and taking a firm stance.  A zipped lip and a firm stance can make them seem “crazy” to those who strongly disagree.  However, it’s always best to think that even if you don’t understand, they have their reasons.  They do. 🙂

Hopefully this clears up some of the common myths about ‘alternative’ families!

What myths have you heard?