Stand in Love, Not Judgment: Food Choices are Not an Issue |
AD 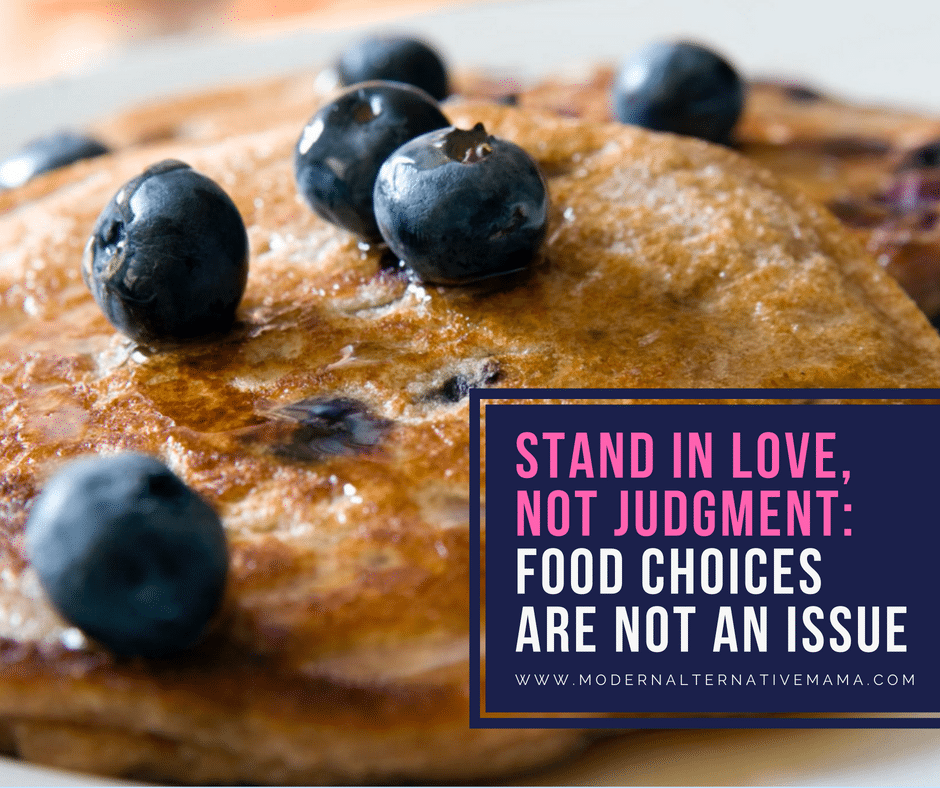 Stand in Love, Not Judgment: Food Choices are Not an Issue

The other day I was curious how much other peoples’ kids were eating, because mine always eat a lot.  They are constantly eating!  They all beg for meals and snacks constantly.  I posted a few examples of meals they had eaten in the previous few days at random, to show the sheer amount of food that they consume.

What I expected was to hear a variety of “Oh, my kids eat that much too!” and “Mine don’t really eat a lot, no.” and “My kids go through phases where they eat more or less.”

Instead what I heard was:

There are 21 meals eaten in the average week and toddlers are known for going on “streaks” where they will want a lot of one food or type of food, and then after a few days they will want something else.  It all balances out over time, usually over the course of a week or so — which means throughout all 21 meals + snacks, toddlers should have a “balanced diet.”  (Which doesn’t look like what the mainstream thinks it does, anyway.)  I post three very brief examples, with no details about ‘what’ the food contained, and that is what I hear??

I’m very surprised.  I thought my readers knew better than to issue judgement like that.

(Just as an example, I mentioned my kids ate a lot of “pancakes.”  Some readers jumped to the conclusion that this meant lots of refined grains!  Umm, no.  Have you read the blog?  In this case they were gluten-free pancakes, a recipe I haven’t posted yet, but they were a combination of brown rice flour, coconut flour, eggs, raw milk, sucanat, and sea salt.  No refined grains here, quite a bit of protein, plenty of healthy fats from the milk, eggs, and the butter they were cooked in.  On other occasions it would have been soaked whole wheat pancakes, possibly with pumpkin or squash added.  Or coconut flour and banana pancakes.  I typically do not make things with white flour.)

Really, though, this brought up a bigger issue, and one I was also thinking about earlier in the day…judgment.  We have an awful habit of judging people, and often doing so unfairly.  Let me explain.

Friday afternoon around 1:30, we were at our very last stop on our shopping trip (our fourth store).  We had been at it for 2.5 hours, and everyone was tired and ready to go home for lunch and nap.  Because of this, the children were climbing around in the car instead of getting into their seats like they were supposed to.  After repeatedly reminding them what the rules were, I finally snapped, “I need children in their seats now.”  They climbed in.

Suppose you walked by my van at that moment, to hear me raise my voice and order the children to sit that way.  And suppose that you (of course) had no idea that this was the very last bit of a very long morning, coming after two very long days with late nights.  Tempers were short and it was an unusual moment.  But for a stranger walking by, none of this is obvious.  A stranger would only see that moment as it was –– and it was really only the “tip of the iceberg,” so to speak.  A stranger might think, “Wow, she’s a bad mom, if that’s how she talks to her children!”

(And if I *always* talked to them that way, maybe I would be!  Then again there are worse things to do to your children than raise your voice slightly.)

When we are out in public, we see — and do! — all kinds of things that draw judgment.  We judge based on the information and situation in front of us, often harshly.  We make assumptions that the situation we are seeing is “normal” and “typical” for the people involved, and that it is somehow representative of who they are.

It is not, in many cases.

I’ve learned, personally, that when I see a mom yell at her children or grab one by the arm and pull him/her that that mother is probably just at the end of her rope after an unusually long or bad day.  She is not a bad mother.  This is not necessarily (and in fact, probably not) representative of how she typically treats her children.  When I see this, I just smile sympathetically — we’ve all been there.  Yet many would judge the mom harshly…based on that one moment in time.

When we judge someone else in small snapshots like these, whether it’s the mom yelling at a child in public or the brief examples of meals I posted, we’re being too harsh.

Before judging someone, we need to step back and think:

It is so important to stop and think about this before judging someone.  Almost always we are too quick to judge and we do so too harshly.  We jump to conclusions based on a very small amount of information.

In my own example, I also heard: “You must not give them enough water.” (They drink it all the time, whenever they want.)  “You must serve them too much food and force them to clean their plates.”  (Nope, they eat on kid plates and ask for seconds and thirds if they are truly hungry.  Sometimes they don’t eat much or don’t ask for seconds at all.)  “They will probably become obese if you don’t limit their portion sizes.”  (Actually most adults in this country under eat, and that contributes to their weight issues.)

The examples above have to do with “world view.”  That is, the frame of experience, ideas and beliefs through which a person interprets the world. If someone has struggled with being overweight themselves and has always been told that it is because their portions are out of control, then they will read that bit of information into anyone sharing that they eat a lot.  They will worry that the person will struggle with the same thing they have.

People react to situations entirely differently depending on their world view.  When a world view is ingrained staunchly enough, a person literally cannot understand and accept information which counters their world view.  Some even react violently to it.

For example, on every “controversial” post I’ve ever written or posted (like Lindsey’s post on dental myths a couple weeks ago), there are some people who simply refuse to understand or agree with any part of it.  They reject it outright and treat it as it is extremely offensive to them.  Most of these type of comments never get published because the people are personally offended and can get downright nasty!  They do this because the information goes strongly against their deeply-held world view.

It is important to remember that if someone does something differently than you do, or shares new information that contradicts what you believe, that they are not doing it to offend you or to spite you.  And if someone gets angry with you because you do something differently or have shared new information, it has to do with their own deeply-held convictions, and not because anything that you have chosen or believe is actually wrong.  Worldview shapes how we understand and react to everything…and it’s important to consider this in any controversial situation. It is not okay to judge someone else for their food choices.

Most all of us on here are somewhere on the path to real food.  Or hope to be someday.  And there are plenty of others yet who are not even aware that there is a difference between “real food” and “food.”  It is fine and good to help educate people who are open to learning and walk with them as they make changes.  That is not judgment (as long as the attitude is one of love!).

But to look at someone’s current food choices and think “That is wrong because…” is not okay.  It’s impossible to tell why a family makes the choices they do.  (Special diets, allergies, budget restrictions, etc.)  Plus, frankly, everybody’s family has a different set of tastes and needs.  One family could eat heavily ethnic food, another very meat-and-potatoes.  Or one family could eat almost no meat, and another could eat largely animal products.

We all eat in a way that works for us, in this season of our lives.  And just as in the situations above, there’s a lot that others don’t know about a family’s food choices.  It’s easy to look at what someone is eating and think, “I would eat ___ instead” or “Maybe they wouldn’t have health problems if only they didn’t eat ____” or even “Hmm…they think that’s healthy??”

We must stand in love when we approach others.  There’s just so much we don’t know about someone’s circumstances.  We should assume the best and reach out to help if needed, but never in judgment.  Only if we have a true intent to help another.

What do you think?  Do we judge people too harshly sometimes?