A response to the AAP Statement on Circumcision |
AD 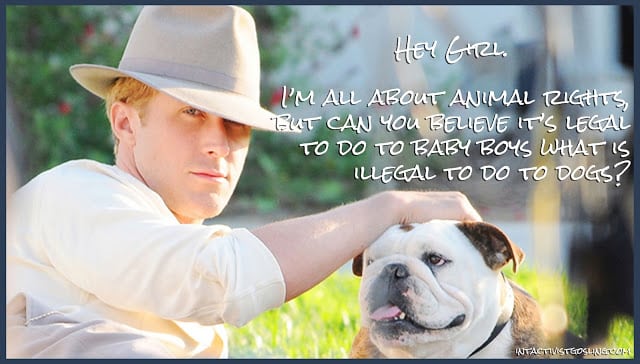 A response to the AAP Statement on Circumcision

You’re pregnant, and you’ve found out you’re having a baby boy. You’ve likely talked about circumcision by now. Maybe you’re for it, maybe you’re against it, or maybe you don’t know how you feel yet. So, you start looking around. You ask your doctor or healthcare provider. And, you find a lot of information about the American Academy of Pediatrics’ stance on circumcision. You had heard that they didn’t recommend it at all, but all of the sudden, now…

On August 27, 2012, the American Academy of Pediatrics released its revised statement on its male circumcision policy. The last statement released in 1999, stated that the “Existing scientific evidence demonstrates potential medical benefits of newborn male circumcision; however, these data are not sufficient to recommend routine neonatal circumcision.” This year, the new statement reads, “Systematic evaluation of English-language peer-reviewed literature from 1995 through 2010 indicates that preventive health beneﬁts of elective circumcision of male newborns outweigh the risks of the procedure”, yet ultimately leaves the decision to the parent on whether or not they feel circumcision is best for their child.

So, Why is This Change in Policy so Important?

Parents look to organizations like the American Academy of Pediatrics for trustworthy advice on how to best care for their children. When a large organization, which we expect to be looking out for the best interests of our children suggests that we are doing a service to our babies by cutting healthy tissue because it will provide them health benefits in the long term, parents tend to listen. Because preventative health benefits sounds scary, and no parents want to hurt their babies right?

Conversely, the AAP “opposes all types of female genital cutting”. I can only assume that if the AAP endorses the cutting of male genitals and not female, there must be some great inherent danger in having a foreskin, whereas the labia and clitoris are inherently riskless.

Or, could it be that the AAP hasn’t told a complete truth? Is this simply scare tactics that still didn’t leave parents with any valuable information regarding the best practice when it comes to their son’s genitals.

Let’s examine some of the risks the AAP outlines in the statement:

The AAP statement suggests that the risk of acquiring a UTI is reduced in the first year of life.

And, where is the recommended prevention technique for females at birth? Being that females are at a greater risk than males as a general rule, I would expect a similar preventative technique for them as well.

That’s right, there isn’t one.

One can only assume this is so, because UTIs don’t require some extreme and surgical preventative measure. So, then, for the AAP to use this as a reason to endorse the surgical removal of healthy penile tissue seems extreme. Reduction in the Risk of Penile Cancer

According to the American Cancer Society, penile cancer makes up less than 1% of male cancers in the US, but is significantly higher in other parts of the country (accounting for about 10% of cancers in males). 95% of these cancers are in squamous cells, and can develop anywhere on the penis, but most are on the foreskin or glans. The risk of acquiring penile cancer in developed countries is about 1/600 in uncircumcised males.

Some of the risk factors for penile cancer are:

Since we’re interested in how circumcision affects penile cancer rates, we’ll leave age, psoriasis treatment, and smoking alone, and touch on STDs in a bit. For now, let’s focus on the top three.

In older research, it was suggested that smegma caused penile cancer, but it is now more widely accepted that excessive build up of smegma may irritate the penis, which may increase the risk of cancer. Since phimosis can make the penis hard to clean, the theory is that it can contribute to this build up.

These are both easy to deal with. To reduce the build up of smegma, boys need to be taught proper hygiene, which, by the way, consists of retracting the foreskin and rinsing the head of the penis off with water. If phimosis is a concern, there are many non surgical options. The foreskin can be stretched either manually using an array of stretching tools like the Glansie or the TLC Tugger.

Now – what about the female external reproductive cancers? Surely the risk must be very low? According to the American Cancer Society, 1 in 406 women will develop vulvar cancer. That’t right – women are at higher risk of being affected with genital cancer, and more likely to die from said cancer, yet the AAP does not deem this a worthy cause for removal of healthy tissue at birth.

Reduction of Risk of STDs

The AAP statement argues that circumcision reduces the risk of certain STDs, including HPV, genital herpes infections, and heterosexual HIV. The idea is that by removing the mucosal lining of the inside of the foreskin, it is harder for germs to permeate through the tougher skin left around the head of the penis. This conclusion was made from a 2009 study connecting male circumcision to increased HIV and other STD infection in Ugandan men.

Female genitals also have mucosal lining. The studies regarding male circumcision consistently state that the benefits to the male throughout his life will be passed on to his female sexual partners through his life. If the concern is with female infection as well, why are similar ‘preventative health measures’ not also taken for them? Forgetting, for now, that the study is based on adult males in an entirely different culture than our own, the AAP statement does not once mention the word condom. In the aforementioned study, 60 circumcisions were required to prevent one case of HIV infection. In other words, circumcision had a .016% effectiveness rate in prevention of HIV. This study from 2000 shows that condoms have an 85% success rate in preventing HIV infection. Another study found similar results of 80-95%. In short, a more affordable, less invasive solution exists to a problem that you may or may not be exposed to.

It stands worthy of addressing that there is a general stigma against wearing condoms, mostly for reasons of fit and discomfort. There is a cool company addressing these issues called They Fit , begging the question ‘Why didn’t I think of that!?‘

What the Statement Does Not Address Ultimately, the AAP leaves the choice of whether or not to circumcise in the hands of the parents. And, I agree. The decision of whether or not to circumcise is a deeply personal one – a decision that requires a lot of thought. The people who are at the forefront of the medical community shouldn’t be doling out advice based solely on fear. The information should be broad spectrum and cover all possible outcomes of the procedure, not just those that are at a low risk of happening or preventing.

What do you think? Was the AAP’s recommendation in favor of circumcision skewed in its presentation? How did you make the decision on whether or not to circumcise?