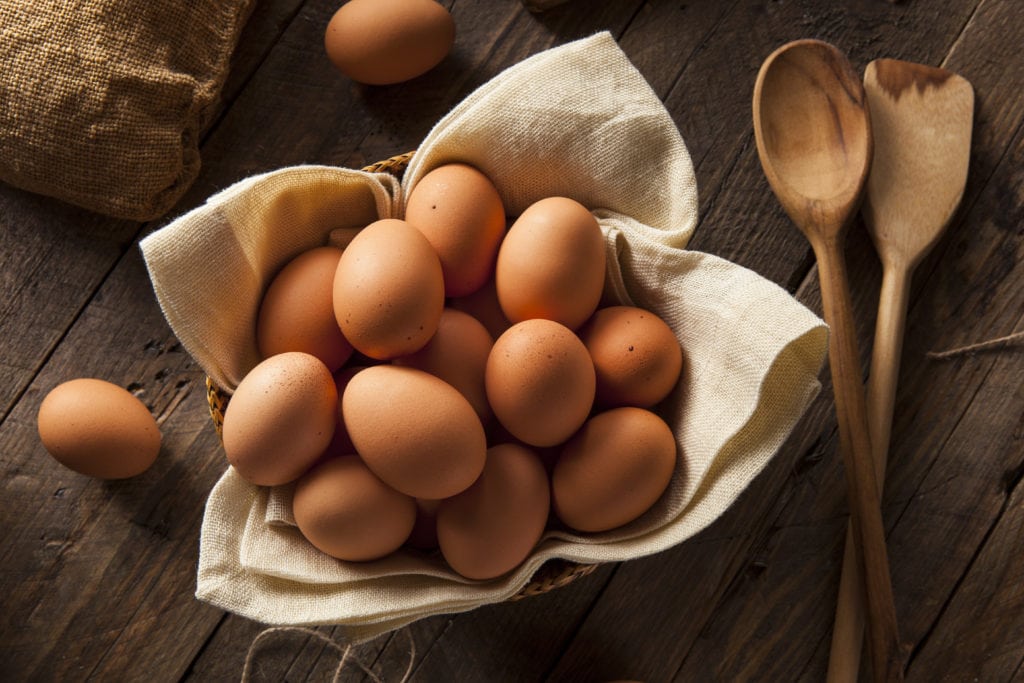 When women get pregnant, then suddenly hear about tons of “rules” they must follow while pregnant!  “Don’t eat this!  Don’t do that!”  It can drive a woman crazy, trying to keep straight what’s safe and what’s not.  Especially when there’s conflicting information out there!  What’s a pregnant mom to do?

Let’s explore some of the common concerns, so that we can see why they’re often said to be unsafe, and whether they really need to be avoided or not.

The Concern: Raw eggs can harbor a bacteria called salmonella, which can be especially serious in pregnant women, causing anything from vomiting and diarrhea to hospitalization, miscarriage, and maternal death (serious effects are rare).

Is It Realistic?: If we’re talking about store-bought, factory-farmed eggs, then yes!  The risk of contamination is fairly high, depending on the exact farm they came from (which can be hard to determine) and the risk is real, if mothers catch salmonella.  However, eggs that are from local, pastured chickens are very different.  If you trust your source and the chickens were raised outdoors, there is almost no risk of contamination.  In this case, consuming raw egg yolks is very healthy (and something I personally did almost daily through my third pregnancy).

The Concern: Unpasteurized dairy products (including soft cheeses) may harbor listeria, campylobacter, salmonella, brucellosis, or other harmful bacteria which can make the mother very sick, including miscarriage or maternal death (rarely).

Is It Realistic?: Store-bought unpasteurized products should not be consumed because their original source may be difficult or impossible to identify.  Milk that is raw but intended for pasteurization should not be consumed (this is a major cause of ‘raw milk’ illness).  However, raw milk from a local, grass-fed farm is typically safe.  Any illnesses, which are quite rare, are usually caught quickly and all customers are informed.  Raw milk from a local farm is an extremely beneficial food.

The Concern: Raw honey may have some botulism spores in it that can cause illness in pregnant women (and young infants).  However, people very rarely become ill from honey.

Is It Realistic?: Since illness is so rare and the botulism found in honey is easily overcome by those with a fully-functioning, healthy immune system (hence why most experts say it is fine to give honey to babies starting around 1 year old, but not before), raw honey is fine to consume during pregnancy (unless you are immuno-compromised or your health professional has advised you not to).  It may be a beneficial remedy for allergies or colds during pregnancy that are far safer than OTC drugs.

The Concern: Caffeine may cause minor birth defects in the baby, such as intrauterine growth restriction.  Consuming a lot of caffeine also makes dehydration more likely, which can cause preterm labor and other complications.  Caffeine can also deplete magnesium, a nutrient that is already low in many people, especially pregnant women.

Is It Realistic?: Some say cutting back is just fine, and if you choose to consume it, you should definitely go for moderation (no more than 2 cups a day).  Some even say that cutting back too drastically is bad for the baby.  I’d err on the side of caution and look for more beneficial energy-boosters, if that is your concern.  B vitamins, magnesium, and probiotics can help increase energy levels (and decrease some of the caffeine withdrawal) more safely and naturally.

The Concern: These may contain listeria from sitting in a not-properly refrigerated deli case.  Also, they often contain nitrates, nitrites, and other potentially dangerous food additives.

Is It Realistic?: Buying lunch meat from a traditional deli is probably not a good idea for all of the above reasons.  Same with most commercial brands of hot dogs or bacon.  However, uncured hot dogs or bacon or healthier deli meat (in packages, not from the deli) should be fine in moderation.

The Concern: Kombucha, if home-brewed, has a tiny chance of becoming contaminated, and the large amount of probiotics can cause serious detox in those who are new to drinking it.

Is It Realistic?: As always, take care in your brewing not to allow a brew to become contaminated (use wooden spoons, wash your hands before handling the SCOBY, keep it covered at all times so flies don’t get in, add plenty of brewed kombucha to the new brew to lower the pH, etc.).  Contamination is highly unlikely if you are careful.  Starting kombucha in pregnancy can be rough because of the probiotics, but it only means you need to start very slowly.  An ounce or two per day until you know how you will react.  If it’s going well and makes you feel good, there’s no harm in drinking it.  In fact, probiotics in general are very good for you!

The Concern: Seafood may be contaminated with mercury, something that is dangerous for pregnant women (anyone) and could affect a baby’s brain development.

Is It Realistic?: Select wild-caught, smaller fish.  Salmon is a good choice.  Limit other fish and don’t choose farm-raised.  It’s a legitimate concern, but fish has so many beneficial properties that it is worth it in moderation.  (Think a couple servings a week.)

The Concern: Soy is high in phytoestrogens, which can affect the baby’s hormonal make up.  There have been some studies done showing that especially boys who are exposed in utero have permanently lowered fertility.

Is It Realistic?: We don’t know exactly how bad soy is.  What we can say is that industrial soy should be avoided, especially GMO.  That means soy milk, soy “meat” and so on.  A small amount of fermented soy sauce or natto is probably not an issue.

The Concern: Mint can cause contractions, which may lead to miscarriage or preterm labor.

Is It Realistic?: For women who are at high risk of miscarriage or are especially sensitive to the effects of oxytocin, mint family herbs (peppermint, spearmint, lemon balm, catnip) are best avoided.  For most healthy women, the effect will not be strong enough to cause a problem.  If you have been advised to avoid sexual stimulation or are high risk, skip it.

The Concern: Fetal Alcohol Syndrome is a real condition that can cause mental retardation and other problems in the baby.  Alcohol can, however, also stop preterm labor.

Is It Realistic?: In general, you should avoid alcohol during pregnancy.  There is no known safe amount.  Plus, metabolizing the alcohol can put a strain on your liver (even if you can’t “feel” it) which is already working harder during pregnancy.  With the guidance of a health professional, alcohol could be used to slow preterm labor if safer methods weren’t working, but these days there are several safer methods available.  If you suspect preterm labor, see a doctor immediately. The Concern: Some essential oils can cause contractions and lead to preterm labor, miscarriage, etc.

Is It Realistic?: Yes.  Know your essential oils (which are incredibly potent) and don’t use ones that are contraindicated in pregnancy.  Here’s a good list of which ones to avoid.

The Concern: This can place strain on your round ligaments and abdominal muscles, which are stretched out during pregnancy.  It can lead to injury, especially late in pregnancy.

Is It Realistic?: There are some things you should avoid.  For example, lifting objects over 40 – 50 lbs. or whatever you are normally comfortable doing (the limit is only that high because many women have to pick up children who weigh that much — I wouldn’t advise lifting things that are much over 25 lbs. that you don’t have to lift).  In general, avoid any lifting that would engage your abdominal muscles, especially late in pregnancy.  This means even if you’re getting up off the couch, don’t use your abs like you would normally — push yourself up with your hands.  (My senior midwife explained to me that this is very important late in my third pregnancy.)  Bottom line?  If it doesn’t feel right, don’t do it.  If you feel okay with it, go ahead…just be careful.

Side and Back Sleeping

The Concern: That sleeping on your back or your right side could restrict blood flow to the baby, potentially causing serious problems.

The Concern: Most versions of the flu shot still contain thimerosal (a form of mercury).  Also, they haven’t been tested or approved for safety in pregnant women.  They are currently recommended (and so is the Tdap) to try to protect pregnant women from the flu while their immune systems are naturally slightly compromised.

Is It Realistic?: In my opinion, the flu shot is not safe or recommended in pregnancy (or ever).  Taking fermented cod liver oil, elderberry syrup, vitamin C (if you get sick), and probiotics can naturally and safely boost your immune system and ward off any serious illnesses.  Echinacea is also safe as an immune booster.  These methods are also extremely beneficial for pregnancy in general.

Hopefully this clears up at least a little bit of confusion!  What’s safe and what’s not safe in pregnancy can be crazy-making, and we all are trying to do our best.

What have you been concerned about being safe or not safe in pregnancy?