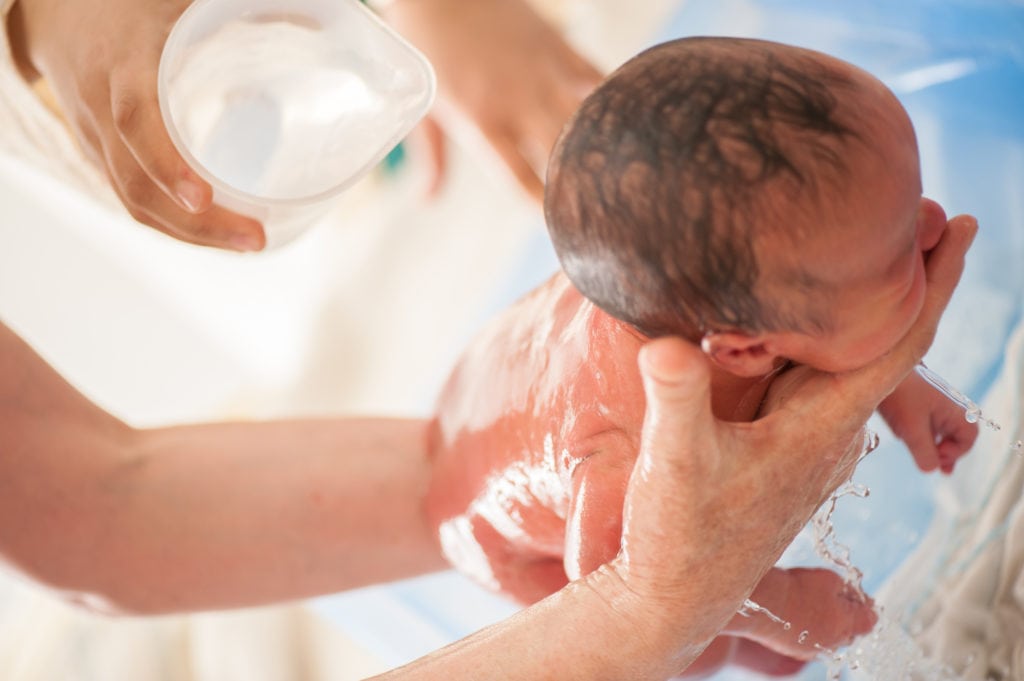 I started feeling a little sick to my stomach on the evening of the 12th. The next two days were spent feeling ill, but just thought I probably had a stomach bug or had eaten something that didn’t settle well.

I had a midwife appointment that day at 5 pm, and everything seemed normal, although I still wasn’t feeling well.  Neither of us thought much of it, though, because I had felt similar to that at my last visit.  However, when I returned home at 6:30, I was feeling like something was going on.  Within an hour, fairly regular but mild contractions had started.  We ate a late dinner around 8, but I didn’t feel much like eating.  Almost as soon as I had eaten, the food made me sick.

Contractions continued, but remained sporadic, with some lasting only five seconds, and others lasting nearly 30, but they were still very close together.  The next time I went to the bathroom, I saw that I was beginning to lose my mucus plug!  This was the sign I was hoping for!  I knew I was in labor, but I wasn’t sure David believed me!

I called my midwife around 10 pm , Kelly, to let her know what was going on.  We decided I would keep her updated and call if I wanted her to come.  I told her I would check in with her after we got Camden and Maddox to bed.  At 11 I talked to her again and decided David and I would try to rest for a little while.  David went to sleep, but my contractions got much harder and I couldn’t rest.  I let David sleep for the next couple of hours while I walked around in the house and listened to and sang praise music.

Finally, I knew I needed him, so I went to wake him up, admittedly, a little mad that he had been asleep, so I woke him up with a shout: “I can’t do this alone anymore!”  He told me later when he woke up and saw my face, he knew I was serious and was actually IN LABOR!

Things picked up a little quicker then.  It was about 1:30 am and I decided it was time to call Kelly.  She listened as I had a contraction over the phone and then said she would pack up and head my way! Then I called my mom and told her “If you want in on the action, you better head this way!”  So she and my dad said they’d be there soon.

Meanwhile, David and I began to prepare our room, covering the bed in a plastic sheet and getting the birthing pool ready.  While David blew it up, I took a warm bath.  While I was in the bath, both my parents and Kelly arrived.  Later, Kelly’s assistant, Samantha also arrived.  I got out of the bath and David started filling the birthing pool.

As my contractions intensified, I would stop with each one and rest my arms down on the bed while David applied counter-pressure to my sacrum and tailbone.  This went on for about half an hour before I decided to go ahead and get in the pool.  When I got in the pool, the contractions intensified even more, and with each one, I would lean over the side of the pool and grip David’s hands.  He was such a trooper even though I found out later I was hurting his hands terribly!

(Although in my defense, there is no way his hands felt nearly as much pain as my body!)  I was in the pool for about two hours when I started feeling little urges to push.  While I wasn’t actively pushing, the contractions were definitely doing a lot of work.

I knew the baby was almost here.  We knew we wanted the boys present for the birth, so I asked David to have my parents go and wake them up (this was about 5 am).  When Camden got good and awake, he sat on the couch with my mom. She said his eyes got wide when he heard the sounds I was making from the bedroom and asked “WHO is in there?!” She explained it perfectly to him, telling him that it was mommy working on bringing our baby into the world. He seemed to understand and wasn’t worried anymore. My parents and the boys came into the room just as I was getting ready to push.  I could sense it was time, and with one small push, felt my water break.  With the next contraction, I pushed and Everett’s head came out.  However, I wasn’t done!

Once I felt the pain of pushing him out, I decided I didn’t want to wait for the next contraction, so as I reached down and felt his little head and tiny little ears, I continued to push and didn’t stop until he was completely out!  I noticed right away that he was a boy (we had waited to find out)!  We immediately brought him to my chest, and while I was so glad it was over, I could not get over how bad it hurt!  (The first two had been hospital births with drugs and epidurals!)

After a little while, I delivered the placenta and we brought Camden in to cut the umbilical cord.  He thought that was pretty neat and didn’t have any qualms about it!

Afterward, Kelly helped me out of the bath while David held Everett, then the two of us got into bed with our three boys for some meet and greet and cuddle time.  Everett did a great job of breastfeeding once he got going.  Then he went to see Grandma while I got into an herbal bath.  In a little while, he was brought in to join me.  He loved the relaxing bath and just completely enjoyed it.  It was a nice and peaceful time for us.

Finally, we all settled in.  My mom had made breakfast for everyone, so I got to eat a yummy breakfast burrito and bowl of fruit before getting ready to rest.  While I ate, Kelly and David weighed the baby (7 lbs) and she measured his height (20.5”).  After that, everyone started cleaning up and heading out.  My parents took the big boys to spend the day with them and David and I went to sleep for a couple of hours with our sweet little Everett.

God was so purposeful throughout my entire pregnancy.  To begin with, I just happened upon a pamphlet from Kelly’s midwifery practice before I was even pregnant, then remembered it after I became pregnant.  When I suggested to David that we do a homebirth, he thought I was off my rocker.  After a few days, however (and many prayers!), he had changed his mind.

Then, after filling out a simple form, we got our insurance to cover the birth!  God really used the time during my pregnancy to draw me nearer to Him than ever before.  I know as I began to go into labor, the devil was trying to steal my joy and cause me to not feel peaceful, but after those months of faith building, I had not one hesitation about having our sweet boy at home.  Never once did I consider something may go wrong, nor did I have any fears.

Even His timing was brilliant!  I did not start hard labor until after Camden and Maddox were asleep, and I was able to withstand labor on my own for a while, while David, my midwife and parents slept.  Once it became too much to bear on my own, the timing was perfect to call my parents and Kelly.  By the time they arrived, it was only a few short hours until our baby was here.  It took us until that night to decide on a name, but once we figured it out, we were so happy to announce the details of our third son, Everett Jackson, to the world!