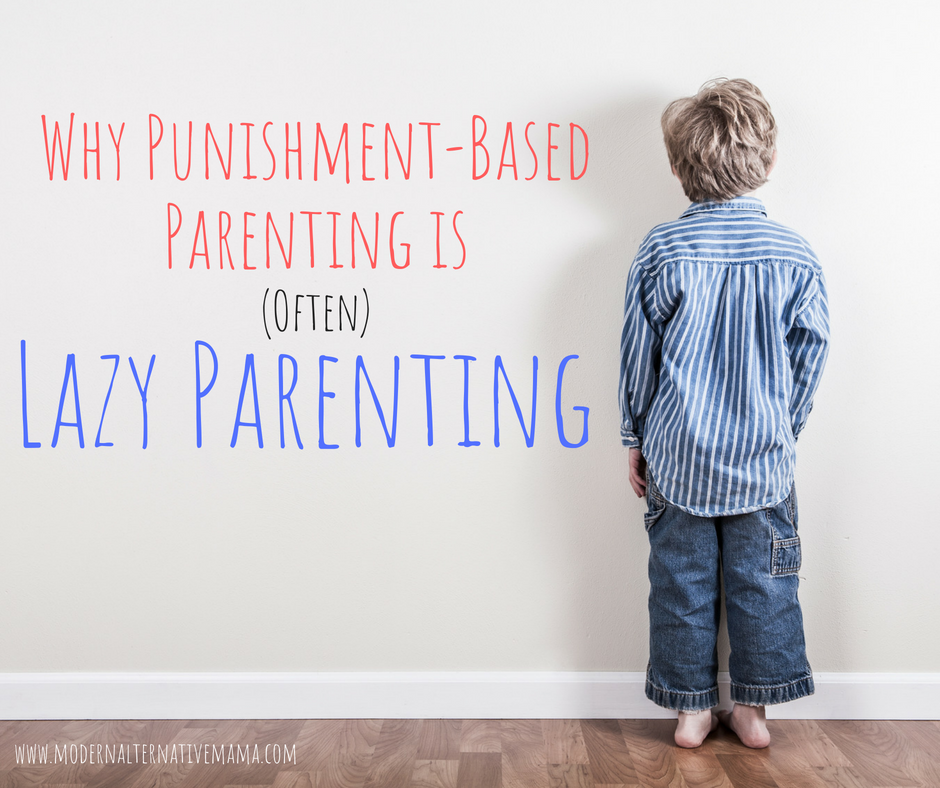 Plus, sometimes I punish my kids too…and I know it’s because I was too lazy to do it the right way.  Curious?

We Are All Lazy Sometimes

Ever have a day when your kids are nutso, off-the-wall crazy (like you seriously wish you had a padded, sound-proof room to stick them in?) and you just want them to stop, like right now?  I bet we all have.  And on those days…have you ever screamed at them, sent them to time out, or spanked them?  Because you were losing your mind and didn’t know what else to do?

We all do it.  Because we are human and we have bad days and we say and do things we should not.  It’s okay, in the sense that we should forgive ourselves for doing the wrong thing and acting out towards our kids because of our own bad moods.  But that doesn’t mean we won’t call it what it is: it’s lazy.  And it’s not good.

It’s my own lazy behavior, and my own desire to remain lazy (because, you know, it’s easier) that prompted me to write this.

What is Lazy Parenting?

When I say “lazy parenting,” I mean that the kid has done something wrong — disobeyed something you asked him to do, mistreated a friend, etc.  And your response is a half-hearted “Go sit in time out!” and you set the timer.  Or, you spank him in anger because you are at the end of your rope. There’s no discipline here.  There is just punishment from a disconnected, frustrated parent.  The child does not learn anything.

I do believe it is possible to use punishment, even spanking, in a non-lazy way.  If you calmly warn your child about inappropriate behavior, you get down on his level and make eye contact and really engage him, you administer the discipline in a loving and connected way, and your attention stays on him until the situation is complete — that’s not lazy.  It isn’t really about the style of discipline used, or if discipline is used at all.  It’s about whether or not you are truly connected or engaged with your child during correction.

But the thing is, a lot of parents who rely on a punishment model tend to get distracted.  They’re dealing with other children, trying to cook dinner, or even talk to a friend.  Their attention is divided.  It seems perfectly okay to stop for the few seconds it takes to march a child over to the time-out spot, look him in the eye briefly and say “We don’t hit!  Now sit here for two minutes and think about how you should treat a friend,” then walk away and continue whatever your previous activity was.

Those of you who are new to the idea of positive discipline, are you listening?  No correction at all is not parenting.  It is certainly not positive parenting.  Children with positive parents are given guidelines and are corrected for inappropriate behavior.  They are just not “punished” in any traditional sense. 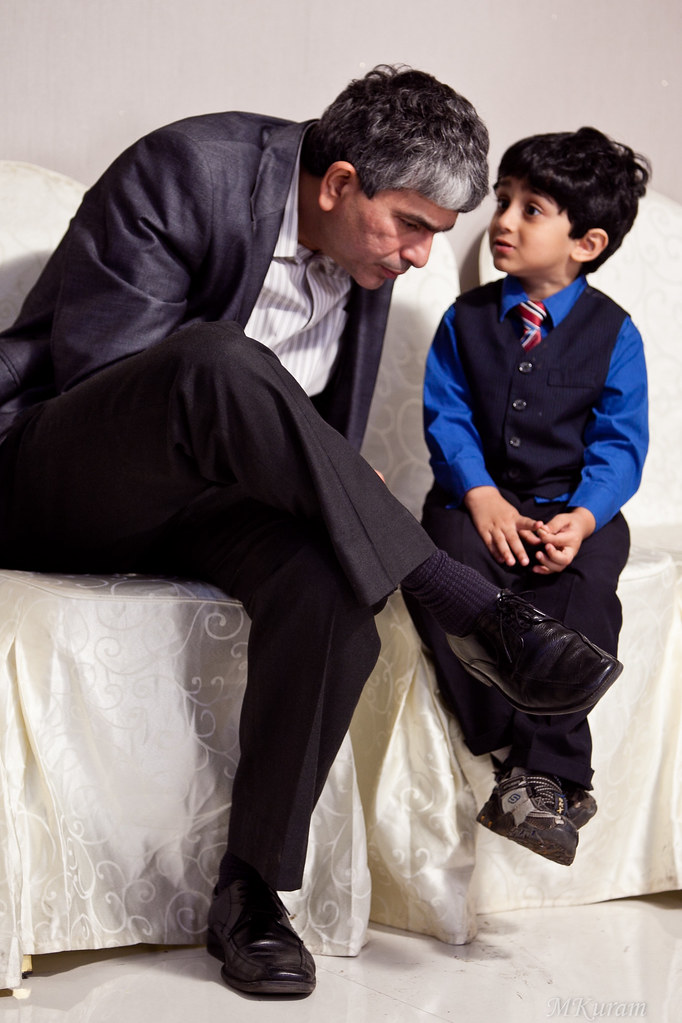 Why Laziness Doesn’t Solve Anything

I told you I’m writing this because of my own laziness.  Sometimes I’m so exhausted by a child’s behavior that I just want it to stop, already.  Especially if I feel like I’ve addressed it calmly and gotten down on their level already.  Out of sheer frustration I march a child over to time out and say, “If you can’t stop hitting people, then you can sit over here by yourself for awhile.”  Gets the child (temporarily) out of my way, but it doesn’t actually solve the problem.

That’s right, there’s a problem.  And it isn’t, for example, that my child keeps hitting someone.

The problem is that small children often don’t know how to get their needs across to us.  They don’t know how to say “I’m too excited!” or “I’m too tired!” or whatever.  They act out because they have a need that has not been met.

Notice that children who are older — say, 5, 8, 12 — do not hit people, generally.  Whether they were punished for it or not, they no longer do it because they have words to explain their feelings.  I’m really not sure what the point of punishing a child for hitting is, anyway.  Does it make a 2-year-old stop doing it?  Or do they continue to do it when upset until they have outgrown the phase, 2 or 3 or 4 years later?  In my experience, the latter is true.

What To Do Instead

When a child is acting out, we need to figure out why, instead of just saying, “Don’t hit.”  Instead, try, “Hitting people makes them sad.  Are you feeling sad right now?  How can I help?”  This usually results in my son (3) crying and saying, “I’m sad!  I need a hug!” and sometimes explaining what’s wrong.  Hitting is a way for a small child to say “I need some help but I don’t know how to tell you.”

Although punishment isn’t the answer, that isn’t to say the child shouldn’t be corrected.  They will learn faster to stop hitting if you provide them with a better way to express their needs. “Hold on a minute.  Hitting hurts people and makes them sad.  Tell me what you need.  Are you hungry?  Tired?  Did the other kid take your toy?” and then walk them through the interaction as needed.  “Oh, if someone takes your toy, you say, ‘That makes me sad.  Can I have it back?’  If you need help, come ask Mommy.”

This requires getting down on their level and being ready to respond to any inappropriate behavior.  It also means being ready to end a play date, have an early lunch or nap, switch activities, or otherwise meet your child’s needs even if it is not what you would prefer to do.  If your child is tired but you want to keep talking to your friend, don’t be surprised if he melts down, and don’t punish him for it.  2- and 3-year-olds do not have tantrums to annoy you.

When children are listened to and supported and not punished through ages 1 – 3 or 4, they become much more reasonable and capable.  They being to stop acting out with tantrums and hitting and biting because they can speak well.  They develop some self-control and the ability to wait (a short amount).  These behaviors cease when they are developmentally ready…and punishing them doesn’t make this happen any faster.  Punishing them just makes the parent feel like they are “doing something” about the child’s inappropriate reactions.

My oldest (who, admittedly, was not parented positively during the majority of her 1 – 3 year old years) can now talk to me at length and rarely ever cries or throws fits.  She still whines some…which is probably because I don’t listen as well as I should.  She’s very confident and generally mature, though.  She just spent her first time away from me — 4 days!  And it was her own choice, too.  She’d never been away from me longer than 12 hours previously but decided she was ready to stay with her grandparents.  We talked to her nightly and she’d tell us what she had done that day and that she was not ready to come back! 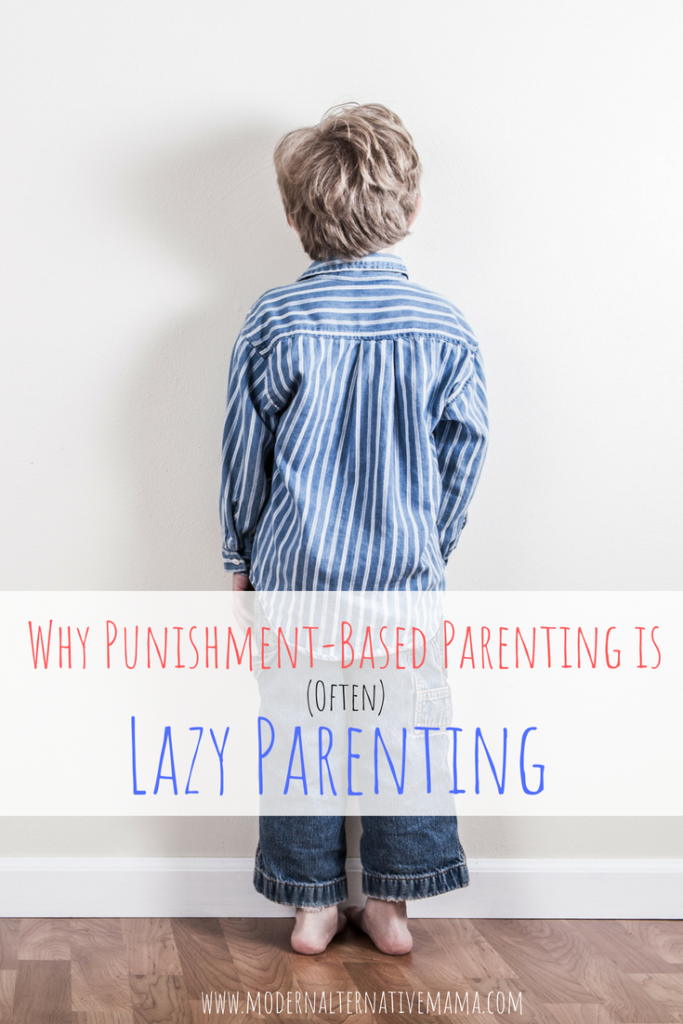 What if It Doesn’t Work?

There are times that positive parenting doesn’t work.  If, for example, it is just not your style, or you fall into the trap of not correcting your child at all.  Believe me — it’s worse, ultimately, not to correct or teach your child at all than it is to punish him (especially if you’re not doing it in anger).

The most important thing is that you are engaged with your child, knowing his needs, meeting his needs, loving him, and teaching him.  Exactly how you accomplish that will be a bit different from home to home.

So why write this?  And why the provocative title?

I also wrote it because I know that when *I* am not trying really hard to be involved and positive that *I* am being a lazy parent.  I assumed I wasn’t alone.  I know that sometimes I just want the kids to be calm and nice and not fight anymore and do what I tell them, already.  I know sometimes I yell at them or stick them in time out because I am just so over the disobedience and creativity that small children are so good at.  I really have to shake my head and think How do they come up with this stuff?!  And how do they do it so quickly and make such a mess?!  But that’s what small children do.  I needed to remind myself that when I am frustrated and I just want them to “behave” that I am being lazy.

(Again…not that children shouldn’t be corrected.  But parents need to understand that learning to “behave” is a process that takes years, lots of love and grace, etc.  Correcting a small child today and expecting him to remember tomorrow or next week is just not going to happen.)

Understand?  I’m writing this to myself, and to other parents who say “I’m in your shoes.  I want to do a better job.  I want to understand how to help my children grow into wonderful young men and women.  I want to get past my own selfishness and laziness.”

In case you’re wondering “How in the world is this Biblical?  The Bible clearly says we are to spank,” I don’t believe that.  The “rod” is figurative and many of the passages regarding the rod are written about teens…not small children.  There are absolutely no passages that advocate striking a small child for normal, developmental behavior.  This article explains it all nicely.  The core thing we are to impress upon our children is their need for the Lord and to help them love Him and follow Him, and to love all other people too.  We do not need to physically (or otherwise) punish them to help them achieve these goals.

What do you think about positive discipline?  Does it work in your home?