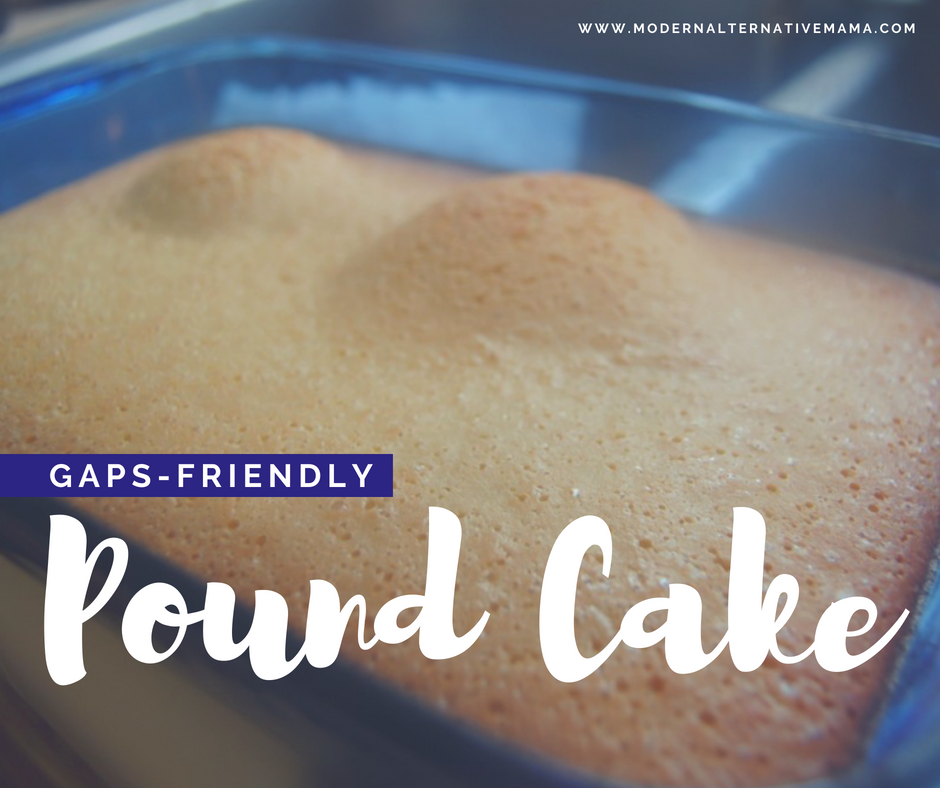 Recently I experimented with a traditional pound cake (which is equal parts butter, eggs, sugar, and flour).  I used sucanat and sprouted flour.  It was pretty darn yummy, and I really like that texture.  It is very high in sugar, though!

Then, several days later, I was inspired to bake something with almond flour.  The way I create recipes now is that I kind of get an idea, and I go by feel/inspiration.  I just have a ‘sense’ how many eggs I should use, or how much baking powder, or whatever.  So, I was inspired and I mixed some things together.  I knew I would get a cake (as opposed to blondies, another idea I’d had), but I wasn’t sure just how it would come out.

How it came out was delicious.

It is like a pound cake in texture — very dense, but with a very fine crumb.  Obviously it’s not real pound cake, just reminiscent.  It’s only lightly sweet so it’s actually made a very healthy breakfast for us.  It would be perfectly paired with my real buttercream frosting.  You could have a birthday party and serve this cake and frosting and no one would even know it was part of a special diet!  It’s that good.  Are you ready?

(And yes this sort of counts as part of my ‘lunch’ series…I would encourage you to make this and serve it for a quick breakfast or part of lunch because it really is so healthy.  You’ll see Cheeseballs and Philly Cheesesteak Pockets really soon though.) Melt the butter, then add the honey and stir together. Add the eggs. I apparently I forgot to take a pic of adding the first three.  Beat this very well, because the texture largely comes from the eggs.  Add the sea salt. Beat this well.  Then add your almond flour and vanilla. Stir until combined.  It should be a thick batter, but not too thick.  Definitely still liquid. Pour this into a cake pan.  8×8 would work, but I used 7×11 (I think).  I would probably double this if you wanted a “real” cake because this will be fairly thin when baked.

Bake at 350 for 30 – 35 minutes, until the edges are golden brown and a toothpick inserted comes out clean.  Allow to cool, then frost if desired and serve.

You could also choose to simply butter it, or cover it in nut butter, and it would really make an excellent on-the-go lunch.  It’s a great balance of fat-protein-carbs so despite it being a “cake” it could be a main dish.  Or dessert.  Whatever. 🙂

How do you serve pound cake?