What About Alternative Vaccine Schedules? |
AD 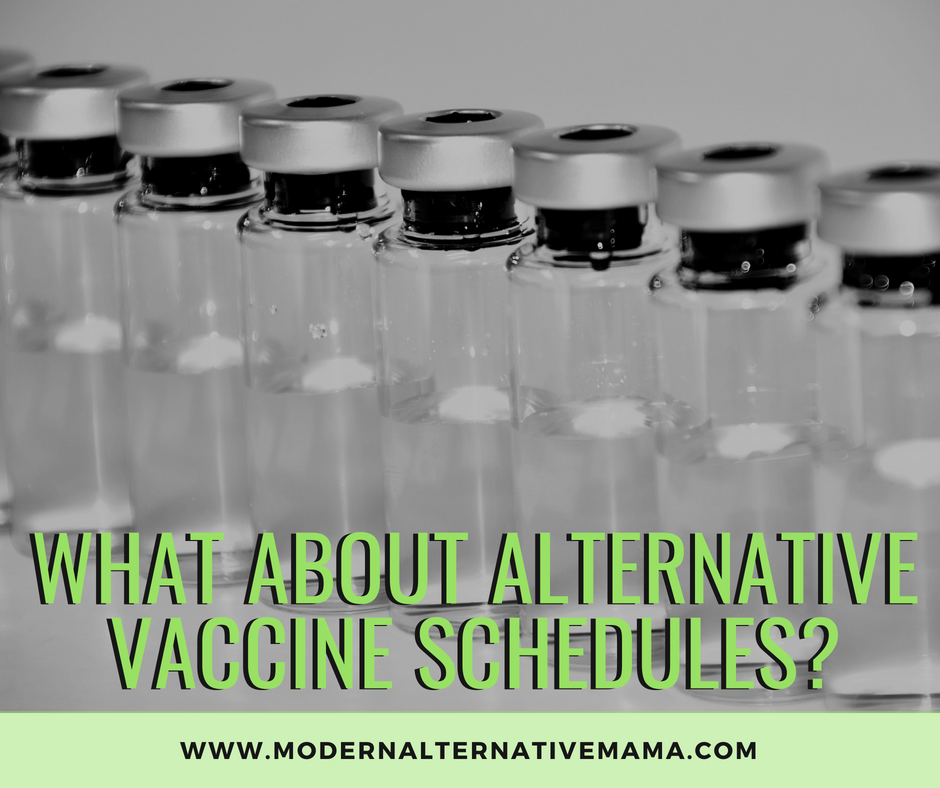 What About Alternative Vaccine Schedules?

If you were as disturbed as I was about some of the vaccines on the schedule, you may have decided to skip certain ones, or at least want to wait until your baby is older before offering some or all of them.  What are the options with alternative schedules, and why do certain doctors recommend against them?

What are Alternative Schedules?

When concern over vaccines become mainstream almost 15 years ago, a lot of parents began saying “It’s too much, too fast.”  They were seeking a way to protect their children without overloading their immature immune systems.  This led to parents choosing the “most important” vaccines only, and/or choosing to begin a more or less complete vaccine schedule at a later age, usually after age 2 years.

How do Schedules Differ?

That is a lot, with babies receiving up to 7 shots in a single visit for up to 9 diseases.  Many parents feel overwhelmed by this and think their babies’ systems are not able to handle it.  Some parents do choose to follow this schedule, but may eliminate Hep B (at least so early), rotavirus, varicella, and flu.  These seem to be most “opted out” of vaccines.

In contrast, the Dr. Sears’ (alternative) schedule looks like this:

All of the same vaccines are on this schedule as on the original CDC version, but there are no more than two shots per visit, and no more than four antigens.  The shots start at two months instead of birth (unless the baby’s mother or immediate caregivers have Hep B) and there are many more visits on this schedule.  The baby receives shots nearly every month.  Dr. Sears does have a delayed/selective schedule but I couldn’t find a copy.

In this version (which I made up based on conversations I’ve had with parents), the schedule is pared down to closer to what the 1980s schedule looked like, and polio is delayed until an older age since it is not a serious threat at this time.

This gives two options: to offer polio or not.  Some parents may opt for polio but not MMR.  Shots are not started until age 2 years to allow the blood-brain barrier to close, and only a couple doses are needed.  Some parents who start out thinking they won’t get any vaccines ultimately end up on a severely limited schedule like this one because they believe that ultimately, when kids are older, vaccines are protective.

Reasoning Behind the CDC Schedule

Some doctors are absolutely against any alterations in the schedule.  There are even doctors who will kick parents out of their practices for not following the exact CDC schedule, with no room for discussion.

Their reasoning stems from a few major points.

The Schedule as Is is “Carefully Studied”

Doctors and researchers state that the current schedule, as written, has been carefully studied to be optimal.  However, there are no studies that actually look at the effects of the full schedule on a developing child’s system, and certainly no double-blind, placebo-controlled studies.

Vaccines are Given When Risk is Greatest

It’s true that pertussis risk is greatest in very young babies, under 6 months of age.  Babies are vaccinated as early as they possibly can be (when they are supposed to develop sufficient antibodies) for each disease.  MMR isn’t offered until a minimum of 9 months because it fails to afford much protection before then; but it is offered as soon as it is considered effective.  Older children are not as nearly as high a risk of most of these diseases as babies are, which is why many doctors feel that it is best to vaccinate as early as possible and protect them when they really need it.

An opposing perspective is that breastfeeding and choosing carefully how and when to expose baby to the public may help protect them at very young ages, and that by the time they are older, they will not really need the vaccine(s) because they are no longer at serious risk.

One source I read claimed that babies ought to get all their vaccines at once because they actually respond better to more when their immune systems are immature.  This is a highly suspect claim, however.

There is a concern with alternative schedules that if the shots are spaced out to do one or two a month that the sheer number of visits required would mean that parents wouldn’t want to bring their children in as often as required.  There are co-pays to think about and the time to make and attend each visit with the baby.  Doctors are worried parents would simply stop vaccinating or stop doing all the vaccines or doses.

Of these fours claims, only one — that diseases are most risky in very young babies — is worth considering in this argument.  The final claim is a minor concern, but for parents who are determined to space out the shots and still feel they are important to get, they will find a way to make the number of visits work.

Parents are concerned about many issues when they are looking for an alternative schedule.

The blood-brain barrier doesn’t close until around age 2, meaning that it’s much easier for the toxic ingredients in the shots to cross this and cause neurological damage.

Quantity of Aluminum in Shots

Infants on the CDC schedule may get as many as 1225 mcg of aluminum in one visit, according to Dr. Sears.  Although no safety studies have been completed on aluminum in vaccines, he estimates that babies can probably handle around 30 – 50 mcg at once depending on weight.  He also notes that although babies do consume aluminum through breastmilk (and formula — soy formula has an incredibly alarming amount), that aluminum that is consumed by mouth is not the same as that which is injected.  Aluminum can lead to neurological damage, especially in younger babies.

Many parents believe that a lot of the newer shots on the schedule simply aren’t necessary, like flu, varicella, Hep B, Hep A, etc.  These shots have been added in the last 10 or so years and these diseases usually were not much of problem for children prior to adding these vaccines.  (See the individual risk-benefit analysis posts for more on that.)  They feel that their children do not need these shots at all and that offering them may do more harm than good.

Some parents trust shots that have been on the market for twenty years or longer (shots from the 60s, 70s, and 80s), but do not trust those that have been created and approved in the last 10 – 15 years.  They feel that they have not been tested as well or proven safe over time.

Too Much, Too Soon

Some parents are concerned about the effects of so many vaccines at once on the baby’s immune system, which has never been completely studied.  There remains concern about vaccines being related to autoimmune disease.

One area we haven’t talked about in detail is the very real and very scary adverse reactions that can occur after vaccination.  For parents who personally had a bad reaction, or whose parents, siblings, or other children did — the possibility is too real not to consider when making choices about future vaccines.   Vaccine injury isn’t to be taken lightly.  Although many doctors would have you believe that it’s “incredibly rare” or even “never happens,” this is simply false.  It happens.  Don’t use scare tactics or individual stories to make your decisions, but be aware that injuries can occur, especially in sensitive individuals (those with immune system disorders, mitochondrial disorders, multiple allergies, etc.).

There are legitimate concerns about the vaccine schedule, and in not vaccinating young babies.  It is up to each parent to decide which shots they feel are most important, if any.  The risk-benefit analysis posts can help you decide which you feel are important.

Talk to your pediatrician about this, too.  If the doctor says “CDC or nothing,” walk out.  Find a doctor who will treat you like an intelligent person and have a conversation with you, and find a way to meet your needs.

No one else can tell you what to do.  Read through all the material and talk to a medical professional you trust, and come up with a schedule that you feel fits your family’s needs.

How do you handle vaccines?  If you do an alternative schedule, what do you do and why?