Risk-Benefit Analysis: Hep A, Hep B, and Rotavirus |
AD 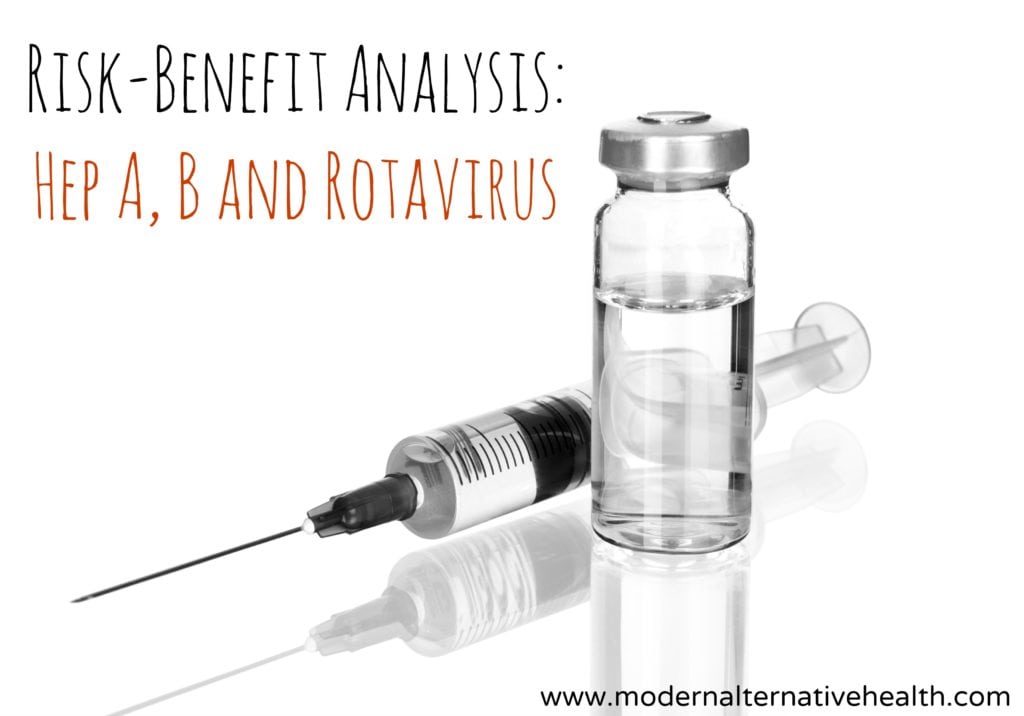 Risk-Benefit Analysis: Hep A, Hep B, and Rotavirus

Today we do the last in the risk-benefit analysis posts, concentrating on Hep A, Hep B, and rotavirus.

What is Hep A?

Hepatitis A is an infection of the liver.  It is spread infected feces, getting into the mouth.  (It would be spread through unwashed produce potentially, employees who don’t wash their hands after using the bathroom in restaurants, etc.)  Pre-vaccine, it caused about 100 deaths per year.  It is asymptomatic 70% of the time in children and 30% of the time in adults.

Interestingly, WHO has no position paper on Hep A.

There is approximately a 28-day incubation.  Early symptoms are abrupt and include fever, fatigue, nausea, loss of appetite, stomach discomfort, dark urine, and jaundice.  This usually persists for about 2 months, but may last up to 6 months.

The greatest “complication” was loss of productivity, as adults lost an average of 27 days of work from hepatitis A infection.  No illness-related complications are mentioned by the CDC.

Case fatality rate is approximately 0.3%, but may as high as 2% in certain populations.

There is no treatment for Hep A, but the infection usually clears in a month or two with no lasting damage.

A 2-dose series is recommended starting at 12 months of age, with the second dose coming at 18 or 24 months.  Two doses are recommended for anyone over age 2 who has not yet had the vaccine series yet, especially those at high risk.

There were 1867 adverse reactions reported to VAERS in 2011.  132 of these were considered “serious,” or about 7%.  These include itching, rashes, localized pain, redness, fainting, fever, severe headaches, nausea, vomiting, fatigue, dizziness, seizures, death.

Hepatitis A is not very common and often causes no symptoms.  When it does, symptoms are generally mild and resolve without lasting damage.  Those who are not at “high risk” should not consider this vaccine (strong words — but there is so little risk from this disease).  It is possible that with natural liver supports (kombucha, dandelion root, etc.) that any potential Hep A infection could be cleared more easily (possible, I am not a medical professional).  The vaccine, on the other hand, presents a very real risk.

What is Hep B?

This is another strain of Hepatitis, and it has made news recently because the vaccine has been recommended for newborns for a few years now.  It is another form of liver infection, and it is one of the leading causes of both acute and chronic hepatitis and cirrhosis (liver failure).

There is approximately a 90-day incubation period for this illness.  Early symptoms include fatigue, loss of appetite, nausea, vomiting, abdominal pain, fever, headache, joint pain, dark urine, etc.  3 – 10 days later, this is followed by jaundice (yellowing of the skin caused by bile, which indicates the liver isn’t functioning normally).  This lasts 1 – 3 weeks before resolving, typically without incident.

Most cases result in complete recovery and immunity to future infection.  Up to 50% of cases are asymptomatic.

Interferon is used to treat chronic cases, and is successful 25 – 50% of the time.  Otherwise there is no treatment, only managing the symptoms.

Hep B vaccines are given to 12-hour old babies before they leave the hospital.  Doses are also recommended at 2 and 4 months, and occasionally again at 12 months.

There were 1133 adverse events reported to VAERS in 2011.  152 were serious, or about 13% (this is on the high side).  Symptoms included severe pain, nausea, vomiting, fainting, redness, swelling, fever, inconsolable crying, dizziness, headache, diarrhea, seizures, death.

One study notes that Hep B vaccination in newborns “triples the risk of autism.”  Another study found that the full 3-shot series lead to a 9-fold increase in autism.

Hep B can be serious, especially in at-risk populations (like newborns born to infected mothers).  Vaccination of all newborns, however, is clearly dangerous.  This is a vaccine where the child’s relative risk needs to be carefully considered vs. the risk of vaccination.  Most newborns probably would do better without it.

Rotavirus is a common virus that causes diarrhea illness.  Most babies will have had it at some point before age 5.  It is usually not serious in developed countries with access to clean water and medical care.

The CDC says: “The immune correlates of protection from rotavirus are poorly understood. Serum and mucosal antibodies against VP7 and VP4 are probably important for protection from disease. Cell-mediated immunity probably plays a role in recovery from infection and in protection.”  Which means they are ‘not sure’ about any of these things (how immunity to rotavirus occurs).

One rotavirus infection is not usually considered to confer permanent immunity.  However, subsequent infections are milder and may be asymptomatic.

Normal Course of the Illness

Incubation is usually about two days.  This is followed by fatigue, nausea, mild fever (in some), and watery diarrhea for 3 – 7 days.  Other infections can cause the same symptoms, so rotavirus can only be diagnosed via laboratory test.

Infection is rare in infants under 3 months of age, and is most likely to be symptomatic in children 3 months to 3 years.  Older children and adults are often asymptomatic.

In young children (especially), rotavirus can lead to severe diarrhea, dehydration, electrolyte imbalance, and acidosis.  This is especially likely in those with compromised immune systems.

Rotavirus accounts for up to 70% of all hospitalizations due to diarrhea.  Rotavirus caused 20 – 60 deaths per year before the vaccine (in the U.S.).  Another “notable” complication is the up to $1 billion in lost productivity from parents having to miss work to care for sick children.

Rotavirus is a live-virus, oral vaccine that is recommended for use in children at 2, 4, and 6 months.  Infants 15 weeks or older who have not received a dose cannot be vaccinated, and the final dose must be completed before 8 months.  (The risk of intussusception increases with age, and the danger of rotavirus itself decreases).

In studies completed in third world countries, severe disease was prevented by the vaccine in roughly 2.5 out of 100 vaccinated babies.  The overall efficacy ranged from 49 to 77%.  “Efficacy” clearly increased in countries where the disease was not a great threat anyway (suggesting that, in fact, it was not the vaccine that was responsible).

About 25% of babies shed the live virus for a couple weeks following vaccination.

There were 905 adverse events reported to VAERS in 2011.  254 of these were considered serious, or about 28% (this is off the charts high!).  These included intussusception, fever, fatigue, inconsolable crying, vomiting, diarrhea, high-pitched crying, swelling, blood in stool, seizures, death.

All together, all vaccines (not just rotavirus) caused 94 deaths in 2011.

This is an incredibly dangerous vaccine.  Average rate of “serious” effects is 3 – 7%.  “High” is 10 – 15%.  28% is simply unacceptable.  The vaccine also sheds the live virus in about 25% of cases.  The vaccine also doesn’t appear to work all that well; the “increase” in efficacy in areas where rotavirus is not much of a threat is clearly not due to the vaccine, but to the other environmental changes responsible for the lowered likelihood of infection.  The illness is not very dangerous if a child has access to breastmilk and medical care, and a relatively clean environment (such as in a developed country).  This is a vaccine that many “alternative” pediatricians don’t even offer.  I would never give this one, personally, even if I were doing others.

We’re done with the risk-benefit analyses!  That was quite a lot of work. 🙂  There is clearly a greater argument for some vaccines than others.  Always, always read the links provided within the text and always ask questions at the doctors’ office.  Ask for the package inserts.  Make sure you are making an informed choice!

Coming up we’ll be talking about ways to protect unvaccinated children, alternative schedules, and how to deal with those pesky vaccine pushers. 🙂

Are you concerned about Hep A, Hep B, and Rotavirus and their corresponding vaccines?