10 Items You Shouldn’t Buy at the Store |
AD 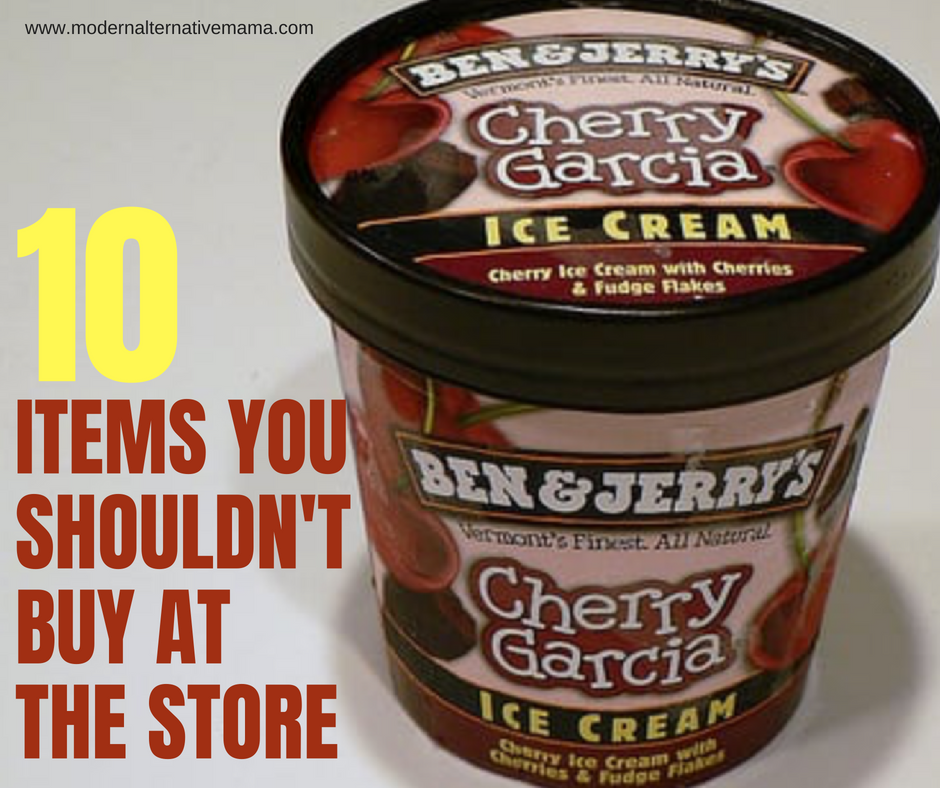 10 Items You Shouldn’t Buy at the Store

We all know there are some things we shouldn’t buy at the store, but I buy food in packages sometimes.

OKAY, I said it!  I do.  But, especially since Jacob is sensitive to corn and soy, I have pretty strict standards about what I will buy and what I won’t.  And the number of packaged items I buy has gone down over time.  If you took a look at my pantry, you’d find almost nothing that you could just grab and eat (frustrating, when everyone’s starving and no one wants to cook).  And if anything ready-to-eat is there, you can bet I’ve probably made it.  Like the macaroons I made for the kids yesterday morning…which are now gone (their friends were here and they shared).

Some foods are “iffy” — you might buy them if you don’t have a particular reason not to (like chocolate chips — they contain soy lecithin so I don’t buy them, but I used to sometimes before we discovered Jacob’s sensitivity). Or maybe some are just special, rare treats.

But there are some things that, generally, you should never buy at the store, if you can help it, because there is just no redeeming value there.  Let’s dive in and take a look.

I can walk into some health food stores and find “grass-fed beef.”  It is potentially as low as 30% grass-fed (that’s what USDA organic standards require) and very likely not grass-finished.  And plain ground beef costs $6/lb. or more.  In any normal store, beef is corn-fed and probably has hormones and antibiotics in it.  I can’t even stand that stuff anymore; it stinks and I don’t feel well after eating it (yes, plain beef).  And that CAFO (concentrated animal feeding operation) meat you buy at the store costs $2.50/lb. minimum, on up to $4/lb., depending on the store and “type” (fat content).  Or, I can go to my local farmer and buy 100% grass-fed beef for $3.50/lb.  It’s a no-brainer.  Even if it’s not actually cheaper to buy the best in your area, it’s worth it for high quality meat.

Who doesn’t love ice cream?  There have been weeks — yes, really — where we literally ate an entire batch, every single day.  This was usually, but not always, in the summer.  It was our bedtime snack.  However, it was never something I could buy at the store.  That stuff has anti-freeze in it, plus skim milk (in ice cream), corn syrup, guar gum, and a lot of other additives.  And that’s just for vanilla.  Forget about the junk in the interesting flavors.  Make your own ice cream at home and skip the junk.  Mixing raw cream, raw pastured egg yolks, raw local honey, real homemade vanilla…it’s practically a health food!

There’s one caveat to this: if you can find real sourdough bread (ingredients should read: flour, water, salt and maybe honey), that is fine to buy at the store.  But if we’re talking the usual grocery-store-bakery-dinner-roll sort of bread, don’t buy it.  The ingredients list has about 30 things on it, including soy oil, powdered milk, high fructose corn syrup, dough conditioners, and other things that make you go “Is that food?”  It’s not.

Not to mention bread is usually made with all or mostly white flour (even “whole wheat” bread is at least half white flour in most cases), and it’s treated with some type of preservatives.  Real, homemade bread doesn’t stay soft and mold-free for weeks at a time.  It’ll be “less good’ the day after you bake, stale and dry by 2 or 3 days, and moldy by a week, supposing it’s wrapped up (if it’s sitting out, it’ll just dry out and be good for breadcrumbs, which are something else you should never buy).

You cannot buy healthy stock from the store, with very few exceptions.  I know some farms or small stores make their own stock in-house, but this usually is expensive, $3 – $4/quart.  Stock is so easy to make, and bones cost $1 – $2/lb., which ultimately means you’re paying under $10 for a couple gallons of stock.  Don’t buy the cartons of stock or cans or even worse, bouillion cubes.  The broth you can buy at the store doesn’t have any of the gelatin or other goodness of stock, and they have MSG.  Ugh.  Skip it.  Make chicken stock or beef stock at home!

I used to buy these all the time.  Until I looked at the ingredients and realized that even ones that weren’t sweet contained high fructose corn syrup.  They also usually have soybean oil, corn starch, and various thickeners, artificial colors and flavors.  No thanks.  It’s easy to make your own salad dressing (or this one), or chicken marinade or even barbecue sauce isn’t hard.  Why waste money on unhealthy versions you can buy at the store?

Sometime last year, it was getting late and we wanted a fast dinner.  I headed to a health food store and bought a frozen pizza, rationalizing that it “wasn’t that bad” because, well, it was a health food store.  Umm…yuck?  Plus I didn’t feel well.  Even the “good” ones have white flour (or unsoaked whole wheat…but not much of it), dough conditioners, soy or canola oil, and so on.  Don’t even look at the ingredients on the bad ones…

Instead, do what we used to do (and need to do again): make up a triple batch of pizza dough, then make 20 or 30 personal-size pizzas and freeze them.  It’s simple: make the dough (you can use sprouted flour or adapt for soaking), spread it, pre-bake at 400 for 5 minutes, add sauce, cheese, and any toppings, and wrap it up to freeze.  I haven’t found a better solution than aluminum foil for this, sadly…though I suppose if you wrapped in parchment paper first then in foil, it wouldn’t matter since the aluminum wouldn’t touch your food.  Hmmm….  Anyway, then all you have to do is toss a homemade frozen pizza in the oven at 450 for 10 – 15 minutes.  So awesome.

So many casseroles and other one-dish meals call for cream soups.  It’s almost annoyingly ubiquitous, like with a bag of frozen veggies, some chicken breasts, and a mixture of cream soups, you can make a “from-scratch” dinner, fast.  Not so much.  At least not the “scratch” part.  Have you read the ingredients?  More soybean oil, cornstarch (all GMO), artificial and “natural” flavors, thickeners, preservatives, an incredible amount of processed, refined sodium….  But of course if you enjoy that type of cooking, there’s no reason you should give it up.  Instead of using canned cream soups, make your own cream soups.  Then enjoy your rich, delicious, nutrient-dense meals!

8) Cake or Mixes, or Frosting

Cake isn’t health food.  Even if you make it at home.  But what’s a birthday party without a little cake?  I’m still enjoying my birthday cake (well, I finished it last night — and you’ll get the cake recipe next week and the real buttercream frosting, with no powdered sugar).  But the the store-bought cake, mixes, and frostings are absolutely awful.  They’re full of vegetable oils, refined white flour, GMO beet sugar or corn syrup, various preservatives and additives, food dye, and so on.  There’s no redeeming value to consuming those.  In contrast, if you make a cake and frosting at home, at least you’re getting rich cream and butter, pastured eggs, the chance to use sprouted or almond flour, and other nourishing ingredients.  There’s still sugar.  But there’s definite redeeming nutritional value there.

Same deal here.  Not health food, but homemade at least doesn’t contain vegetable shortening, artificial flavors, and other complete junk.  There’s something delicious and sort of nutritious about a cookie loaded with real butter, eggs, homemade vanilla, and aromatic spices.  Try my grain-free brownies (I love these), or oatmeal chocolate chip cookies (must find a way to soak them).

10) Fried Chicken or Fried Potatoes (or fried anything…)

Eek.  Have you looked at the ingredients on these things?  Fried foods aren’t the healthiest (because the cooking method, despite the type of oil, reacts with the starches and creates some yucky stuff — so keep it as a rare treat), but the ones from the store are made with vegetable shortening, white flour, various additives and preservatives…awful stuff.

Instead, bread your own chicken in sprouted flour, or soak organic potatoes in water (to reduce starch) and then fry them yourself in coconut oil, pastured lard, or another healthy oil.  I am really loving my pastured lard lately — it just makes things so delicious.  Try chicken nuggets, amazing fries, or even popcorn chicken (from my newest book!).

What foods do you refuse to  uy at the store? Were you surprised by any on this list?